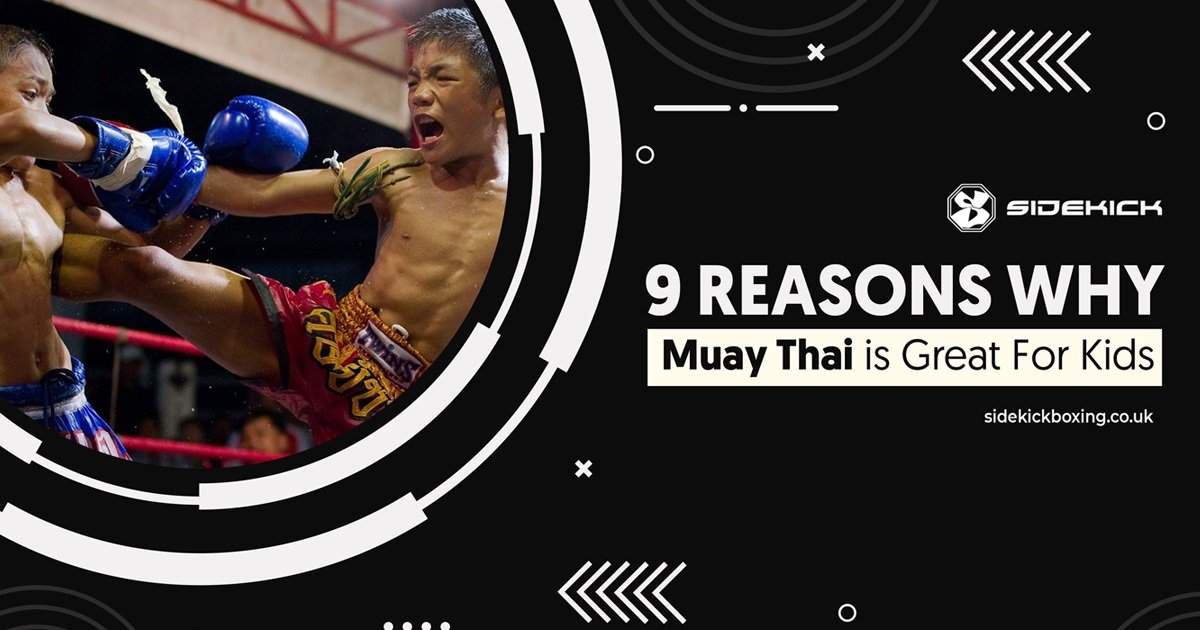 9 Reasons Why Muay Thai Is Great For Kids

Has your child tried many different sports and hobbies and haven’t yet quite found the one for them?

Have you ever thought about taking your child to try a martial art like Muay Thai, as it offers many benefits and kids just seem to love it. Let’s face it, what else could be better than kicking and punching to exert all that energy.  if you are not too familiar with the different martial arts, you may not of ever heard of Muay Thai and may be wondering what it is.

So, What is Muay Thai?

Muay Thai (meaning Thai boxing) is a traditional martial art originated from Thailand, which was developed by the Thai army for battlefield. It has since evolved and has become a very popular combat sport worldwide and is even one of the chosen disciplines to be used in MMA. Muay Thai is a stand up striking sport which has both punches and kicks, quite similar to kickboxing, but many Muay Thai practioners suggest it is not kickboxing.

However, it has many similarities to kickboxing, so the best way to describe it is as a form of kickboxing. Many of the strikes and techniques used in both Muay Thai and kickboxing are the same, the boxing ring, the fight equipment and even the structure of the fight are generally the same, but in Muay Thai, elbows, knees and even clinching are allowed too. This is why it is also named ‘The art of the eight limbs’.

Is Muay Thai better for kids than kickboxing?

Every martial art teaches discipline, respect and self-defence, so no matter which one you choose for your child, it will be full of rewards. Muay Thai and kickboxing classes will generally be structured very similar for children, however many kickboxing classes offer a grading syllabus, which is great for children who want to focus on gaining a black belt.

Muay thai is more of a spiritual martial art and students learn the Wai khru, which is a ritual performed before a fight. It also teaches more techniques, which could be more effective in a self defence scenario. Another difference between the two sports is in Muay Thai, shorts are worn and in kickboxing, satin trousers are generally worn. So, even though both styles are similar in many ways, they are also very different.

Muay Thai is fast-growing in popularity across the UK, as it is recognised as one of the most toughest combat sports and to watch a Muay Thai fight it can appear quite brutal. This can raise concerns amongst parents to whether it would make their child violent and if it is safe for them.

is Muay Thai safe for kids?

Like with most combat sports, they all get controversial to whether they are safe, especially for children and If you have ever seen videos of children doing Muay Thai in Thailand, it understandably may of put you off taking your child. In Thailand they don’t take precautions or have the health and safety like we do in the U.K, so the coaches even let them fight at a very young age.

Muay Thai is a martial art and its main value is to teach respect and discipline and tought correctly is perfectly safe for children. It is designed to be fun and a child doesn’t need to fight if they don’t want to and they should only start sparring when they are quite advanced and full protection should be worn including a chest protector.

Even though training is considered safe, the odd ache or minor injury may still occur, but that will happen in anything your child participates in. Many Muay Thai classes for kids are specifically designed for the age group in the class. This is because some Muay Thai clubs start training for children as young as five, which means that classes are adapted for a wide variety of age groups and abilities. It is important that a child is progressing gradually and most importantly enjoying it.

These Muay Thai classes specifically designed for kids may be called the tots, cadets or little ninja classes. They are designed to be fun-filled play but cleverly incorporate key elements from Muay Thai. From footwork and coordination to balance and striking, your child will learn a wide variety of new skills important to their physical and emotional wellbeing.

Children sparring in Muay Thai should be in a light and controlled manner and they should be fully equipped with protective equipment. They will wear boxing gloves, shin guards, groin guard and a chest protector. Even though head strikes may not be allowed for young ages, a headguard and gum shield may still be worn for precaution.

What are the benefits from children going Muay Thai?

There are so many different benefits to starting your child in Muay Thai. Below are just a few of the key ones we have come up with:

1. Your child will make new friends.
2. It will help boost confidence.
3. It will teach them discipline.
4. Individual sports like Muay Thai is said to help children with conditions like ADHD and autism, as it will improve their concentration by learning the Muay Thai techniques while releasing some extra energy.
5. Learning self-defense.
6. Prevent bullying.
7. Improving physical health.
8. Getting rid of excess energy.
9. It’s fun!

How old does a child need to be to start fighting in Muay Thai?

The IKF allow children to compete and fight in Muay Thai fights from 8 years old. However, this doesn’t mean your child has to fight just because they are already training in Muay Thai. It is the child’s and parents choice to decide if they would like to fight and whether or not they are ready.

Before you introduce your child into the wonderful world of Muay Thai, there are a few different types of equipment that you will need to have in order to ensure that they will be protected and safe whilst trying out their new hobby.

One of the easiest ways to quickly and easily purchase equipment for your child’s Muay Thai hobby is by getting a compete Muay Thai set. Muay Thai sets for kids are a cost-effective way of getting all the equipment you will need all together in one handy pack. These sets usually include matching boxing gloves, shin guards, head guard and shorts too.

However, our sets have a wide variety of options available like some of the ones featured. However, if you’re wanting to buy individually, make sure you buy these essential items below.

If you have decided to take your child to a Muay Thai class, search your area to find which clubs are best near you. It is important the instructor is a certified coach and don’t be afraid to ask the instructor any questions you have. The only issue you may face, is your child loves it so much, you can’t get him/her out of the club.