Home>Kickboxing and MMA news and equipment>Boxer vs Street Fighter: Who Would Win? 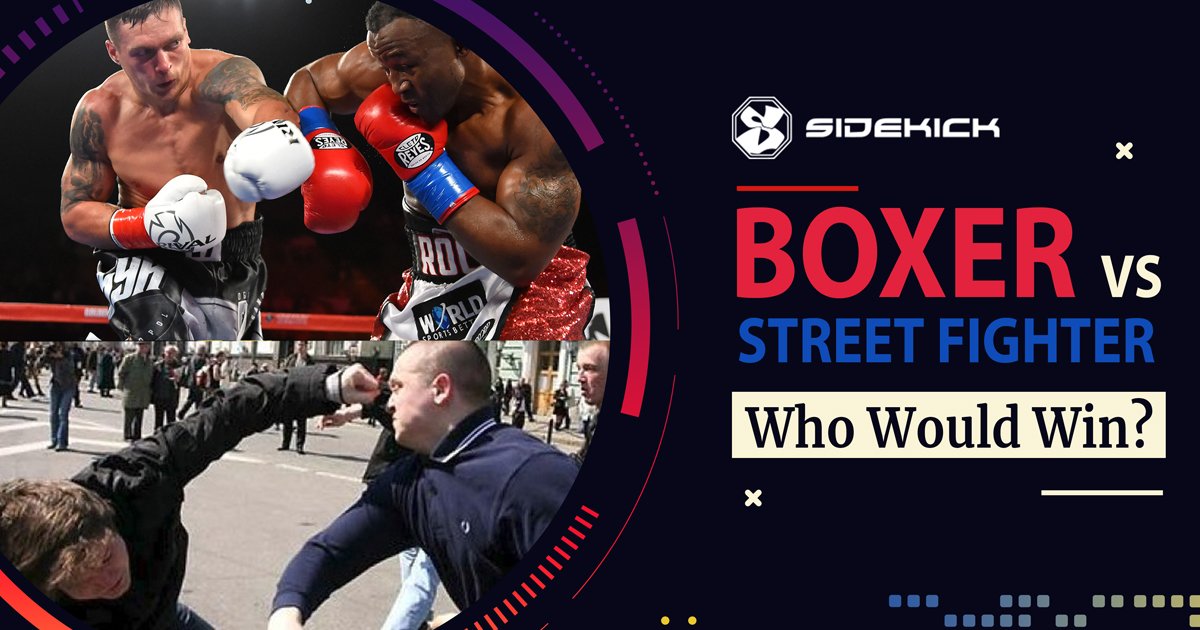 Boxer vs Street Fighter: Who Would Win?

When people look to start a martial art or a combat sport, many want to know if it is effective in self-dense, or even in a street fight.

Boxing is one of the oldest and probably the most popular combat sports around the world. It offers extremely fast powerful punches and perfect footwork, that a boxer would be able to hold their own in any fight.

Over the years we have often seen people ask: Who would win out of a boxer vs a street fighter? and as much as this is a very broad question we will guide you through the differences in a superficial way.

We love to watch all combat sports as it is a test of an individuals skills, strengths and determination to win a fight and the respect between two fighters is amazing to witness. Also, combat sports are professionally structured with a set of rules with a fighters safety in place.

Street fighting is very different and we do not condone illegal street violence by all means. Watching street fights it gives far from enjoyment, if anything it is quite horrible to watch.

Most of the time the people who are usually involved in a street fight have never trained in any effective martial arts or combat training and in many cases its caused from a drunken fued. In a perfect world street fights would never happen, but unfortunately as lots of disputes cannot get resolved morally, fights do happen. This is the reason why self-defence classes and martial arts exist and go back centuries as fighting has always been in us.

Even if you are a boxer and were ever to be in a conflicting situation, the best ever advice we can give is if you can’t diffuse the situation by talking it over, or you believe someone is going to get violent, make a run for it.

Having a fight won’t resolve anything and it won’t make you feel good even if you win, but in some cases a fight cannot be avoided and it might be the last resort.

So, Who would win out of a boxer vs a street fighter?

As street fights generally break out when people are intoxicated, it gives a huge advantage to a skilled boxer to be able to control the fight and finish it quickly. No-one should ever expect to get randomly attacked, but if you are always prepared and can sense a situation breaking out, it will certainly help.

Dan Knight from Sidekick who is a black belt kickboxer said:

“A friend at the club would take his mouth guard everywhere he went. He said you never know when you might need it.”

Let’s start off with talking about the difference in styles of fighting.

A boxer is trained to effectively punch attack and block and defend against punches. A boxer repetitively practices these techniques to get to the skill level we’re they can hit their opponent and avoid getting hit themselves with their illusive footwork and rapid firing punches. These skills would be beneficial in any style of fight, as the punches are fundamentally one the most important aspects of fighting.

However, boxing and street fighting is a totally different ball game and here’s why. In boxing, 10oz boxing gloves and head guards are generally worn in amateur fights and it has a referee present to intervene if one is breaking the rules. It also has a set duration for the fight with intervals between rounds. This is why knockouts are not as common as you may expect. A boxer doesn’t come out swinging in the opening round, as they need to know they can last the entire fight and an opportunity of a knockout punch may not arise.

In a street fight, there is no safety measures, no set time, no equipment and no rules in place. It is a case of anything goes to win. A trained boxer will have a great advantage in any fight, but in a street fight, the traditional style of boxing is not as practical as there is zero protection and without gloves, anyone could have a knockout punch.

A boxer would need to start landing strikes instantly as they can’t afford to bob and weave, slipping jabs and biding their time. A bare fist hits a lot harder than with gloves and will hurt, so you can’t afford to risk to get hit with a single shot. So, trying to look like Mayweather by doing the shoulder roll isn’t going to cut the mustard.

It’s simply a case of who can finish the fight the quickest and a boxer should have this advantage as a fight starts off standing striking. A boxer is also capable of throwing punches with control and without anger, which means more often than not they will land the first punch and landing the first punch is very often the one that wins a street fight.

The other difference it would be for a boxer is that they will be without gloves, so their guard won’t be as tight and more likely for shots to land and a boxer won’t be able hold on to their opponent to bide time.

The main disadvantage for a boxer is if they get taken to the floor, then this would be unfamiliar territory for them and it could be anyone’s fight. The other thing is a street fighter may use weapons when they fight, then the typical boxing stance probably wouldn’t be ideal.

What is a street fighter?

A street fighter is someone who learned to fight on the streets rather than being properly trained in a combat sport like boxing. A street fighter would generally have an aggressive and violent attitude, otherwise why would a person want to brand themselves as a street fighter. Street fighting is far from an art, as they would do anything it takes to win a fight which can make them very unpredictable, as opposed to a boxer being more of a one-dimensional fighter relying solely on their punches.

If a street fighter was to fight another street fighter it would be a battle of the strongest and toughest that would more than likely win, but a street fighter probably wouldn’t last against a boxer, who has had professional training on attacking and defending.

An advantage a street fighter would have over a boxer is they might have more of an aggressive nature and would be used to fighting in random locations without worrying about the consequences. They may not have the best fighting style, but they may attempt anything to win, whether that be punching, kicking, grappling, bitting or even using weapons.

When you see the viral videos of street fighting, their technique is generally horrendous and it is simply a case of who is lucky enough to land the first strike. However, some people are just natural fighters and that is an important thing in fighting is to be able to control your nerves.

A nervous fighter will be tense and not breathe naturally, so a lot comes down to the nature of the person and if a street fighter realises he has come up with an experienced boxer, he maybe doubtful of the outcome.

The advantage a street fighter would have over a boxer is if the boxer’s punches don’t end the fight during the stand-up and the fights goes to the floor, then those boxing techniques are far less useful in the grappling of the fight.

The best thing is to always avoid a street fight, as it will have very negative consequences. Martial arts and combat sports are not about acting aggressively, as they are designed for discipline and respect. However, if a boxer did come face-to-face with a street fighter, the chances are the fight will be in their favour.

If you would like to learn more about self-defense read our article ‘Is kickboxing good for self-defense?’ here.