Home>Kickboxing and MMA news and equipment>Deontay Wilder Versus Tyson Fury 3: Do We Need The Trilogy? 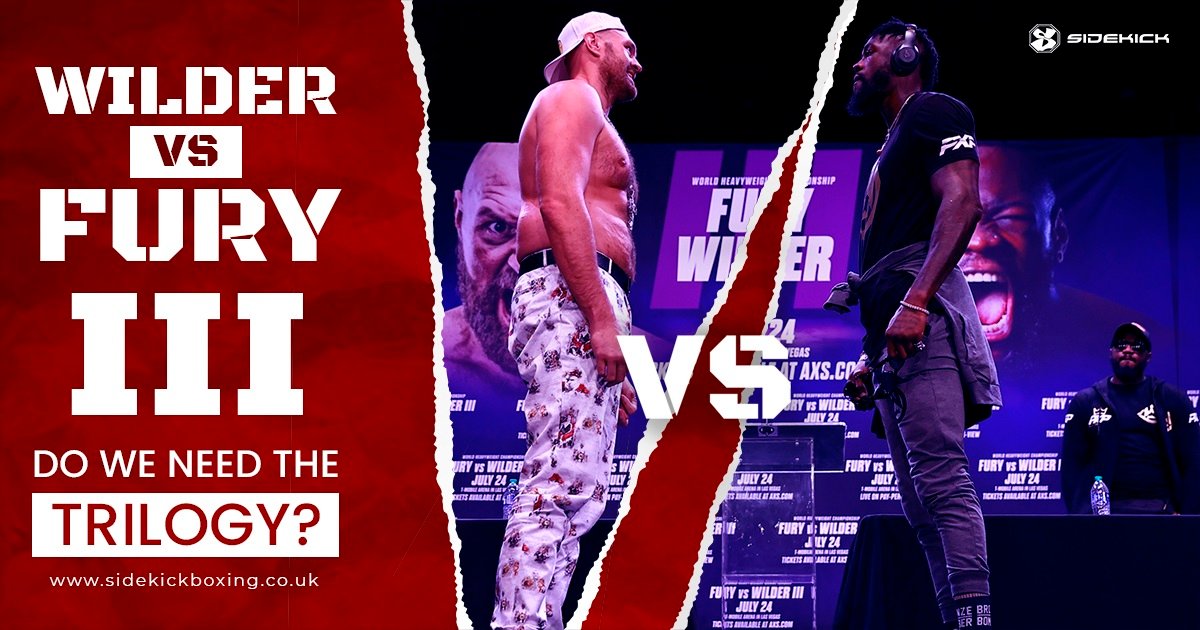 Deontay Wilder Versus Tyson Fury 3: Do We Need The Trilogy?

Back in 2016, when Deontay Wilder was the WBC champion and Anthony Joshua won the IBF, WBO and WBA champion, it was the most anticipated fight in boxing, everyone wanted to see who would be the undisputed heavyweight champion.

So, how come we now have Deontay Wilder versus Tyson Fury 3 and do we really need it?

Deontay Wilder, the heavyweight boxer from Alabama, claimed to be the baddest man on the planet, and he certainly lived upto his name. Wilder was undefeated and had an almost 100% Knockout record in his 40 professional fights.

Wilder’s punches are so powerful that one punch would knock his opponent in to next week. Wilder even started to adapt his style just to look for that one knockout punch. Wilder was a dangerous fighter for anyone and it was a very risky fight, even for Anthony Joshua.

Joshua was quite comfortable fighting lower ranked fighters and still being a world champion boxer, as well as making millions of fans. Joshua was the superstar, and Eddie Hearn, who is Anthony Joshua’s manager, was choosing his opponents carefully.

It would of been a huge fight for Joshua, even though he was undefeated and a Knockout artist himself, stepping in the ring with Wilder would of been his biggest challenge to date. Joshua’s team did appear to want the fight with Wilder, but as it could of been a career-ender, they wanted to make as much from it as possible. Let’s face it, who would rush to fight the man that goes by the name of ‘The baddest man on the planet’.

However, after years going by with negotiations falling through the fight never materialized. Both sides wanted the lions share of the purse, claiming to be the more famous, making the fight sell more, even though they are both heavyweight champions.

This is one of the reasons it would be good to have just one boxing championship belt. It even got really silly when Eddie Hearn, while he was in New York, he was randomly asking people if they knew Deontay Wilder to prove no-one had heard of him.

It was almost as if they thought if Wilder wanted to be the undisputed champion so much, they could dig their heels in a bit until he agreed to Joshua’s terms. But, what they didn’t know was, Tyson Fury had his ban dropped and was planning a return to boxing, and not for any boxing fight, he wanted a world title shot, leaving the Joshua fight in Jepody and the Deontay Wilder versus Tyson Fury was on instead.

Even though Fury was the former champion, he had been out of the boxing ring for a few years. Literally, everyone wrote him off and thought this would be easy pickings for Wilder. What people didn’t stop to remember is Tyson Fury has one of the slickest heavyweight movements out there. Not only that, Fury comes from a traveller background, hence the fight name ‘Gypsy King’, so he is one tough guy.

Fury weighing 27st was probably the only person on earth that believed he can do it. In life, it doesn’t matter how many people don’t believe in you, if you believe it, anything is possible, as Fury was set out to prove.

As Fury was regularly posting his journey back to boxing and training on social media, like running up steep hills while carrying a tree trunk, it wasn’t long before the fans started to take him seriously and believe that not only will he be able to put up a fight, but he could actually win.

The Deontay Wilder versus Tyson Fury fight was on the 1st December 2018, at the Staples Center in Los Angeles, California and as it was held in America, the fight fans in Britain was going to have to stay up late to watch it. This fight between Wilder and Fury will probably go down in history, simply because how it went and the end result.

Fury dominated most of the rounds and clearly out-boxing Wilder, making him frustrated. It wasn’t until the final round when Wilder found a spectacular cross, followed by a hook as Fury was going down, Fury was out.

As the referee was giving Fury a 10 count, Wilder was smiling and shimmering around like he had won. Then he turns round to see Fury is back on his feet and good to go. The final bell goes and everyone is on the edge of their seat to see who will be announced the winner. A draw.

Most experts believe that Fury should of won it on points, even though he got knocked down in the final round, as he gained many rounds earlier in the fight. However, as Fury did scrape it through the last round by the skin on his teeth by getting back up with split seconds remaining in his 10 second count, a second fight was needed.

As the first fight ended in a controversial draw, Wilder remained the WBC champion and no rematch clause was needed to be activated from the champion. However, Wilder wanted to prove he could beat Fury, and Fury also believed he won, so they agreed on a rematch, which was billed as ‘Unfinished Business’.

The rematch was on the 22nd February 2020 at the MGM Grand Garden Arena, Las Vegas. Fury insisted he needed to knockout Wilder in order to guarantee the win, after he thought the previous fight was poorly judged. The fight went exactly how Fury planned and he stopped Wilder in the 7th round and Fury became the new WBC heavyweight champion.

We all thought the Wilder and Fury fights was done and dusted and we were now excited for an all British undisputed world title, but this time with Tyson Fury vs Anthony Joshua. Then just when it was all set for this August and with only a few things left to finalise, Deontay Wilder takes legal action against Fury and requests the 3rd fight must take place. The bout is now scheduled to take place at T-Mobile Arena in Paradise, Nevada on 9th October 2021.

Let’s be honest, until Fury had fought Wilder, he was the most feared fighter in the boxing ring. Nearly every one of Wilder’s opponents got knocked out or they would retire in the corner and only one fighter managed to go the distance with him, so all the time Wilder has two hands, he has the ability to beat anyone, especially as the last thing a boxer loses is his punch. This fight will certainly be in Fury’s favour, however Wilder looks like he has taken this camp seriously and trained harder than ever.

Can there be a Deontay Wilder versus Tyson Fury 4?

Yes, it is possible. If Fury wins this next fight in October then it will be very unlikely for them to have the 4th fight. However, If Wilder wins the next fight, it makes it 1 win each and 1 draw. So, they may have the final 4th fight to finalise who is more victorious out of it all.