Home>Kickboxing and MMA news and equipment>Eye Poke: How Can They Be Stopped In MMA? 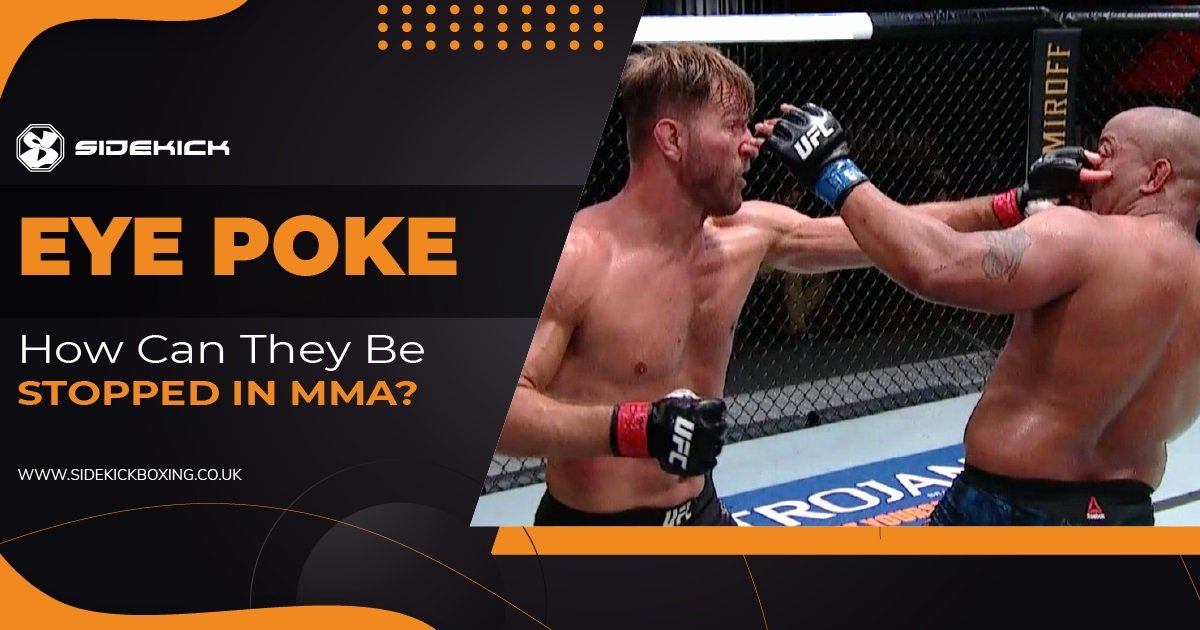 Eye Poke: How Can They Be Stopped In MMA?

MMA is a combat sport we’re fighters are intentially looking to hurt their opponents to win. As you can imagine, with punching and kicking each other, you would expect for fighters to come out of a fight with a black eye or two. However, a fighter getting punched in the eye is perfectly acceptable, but they should never get poked in the eye.

Over recent years, It has become more and more of a concerning issue with the amount of fighters getting poked in the eyes in MMA fights. The eye gouge is an illegal move in all combat sports, but in MMA, with the style of the fingerless gloves and the way the fight is fast paced, an accidentally poke to the eye can happen.

What is the difference between an eye gouge and an eye poke?

Both an eye gouge or poke to the eye is protentional dangerous as it could leave a fighter blind. An eye gouge is the act of pressing or tearing the eye using the fingers. Eye-gouging involves a very high risk of eye injury, such as eye loss or blindness. It is a prohibited attack and is only ever done to deliberately damage someone’s eye. However, eye gouging is taught in some self-defence systems. Back in 1995, Gerald Gordeau eye-gouged his opponent Yuki Nakai in a Vale Tudo competition which left him blind in one eye.

An eye poke is when someone’s finger goes in to a fighters eye, which more than likely is accidental. Most recently, it happened to Belal Muhammad at UFC Vegas 21, who was fighting against Leon Edwards for a title shot. Neither fighter got the win as the fight was waved off a non-content as an accidental eye poke from Leon Edwards in the second round left Belal Muhammad’s eye bleading and wasn’t able to continue.

The seriousness of the eye poke in MMA is becoming a concerning issue that can be difficult to prevent or solve.

So, What can they change to prevent eye pokes in MMA?

In MMA, the fighters wear fingerless MMA gloves which gives the hand lots of mobility as fighters need the use of their fingers to be able to strike and grapple.

Over the years, UFC gloves have received lots of criticism amongst the fans suggesting they change the UFC MMA gloves similar to the Pride style of MMA gloves, which are quite like MMA sparring gloves. The reason for this is with the Pride MMA gloves, the hand forms more of a natural fist. They have more padding nearer to the end of the fingertips and each finger is supported with single pieces of leather material to secure each finger in place.

The UFC MMA gloves are shorter in length on the fingers and each finger is supported in a fixed finger shape, making it quite stiff for the fingers to bend. After time they will break in and they will be easier to close a fist, but in each MMA fight, fighters wear a new pair every time.

Another solution is to prevent the eye poke is to change the gloves to boxing gloves. This of course would be a drastic decision as they could only effectively clinch and it would make it very difficult to grapple on the ground, but it is the fighters safety which is paramount.

Another way to make fighters cautious is make the rules stricter. A point to be instantly deducted even for an accidental poke to the eye. If an eye poke looked deliberate, a ban could be the solution.

Fighters could wear goggles or purposely manufactured eye protectors to suit fighters in combat sports. Although, this may not give off a great image, it certainly will protect the eyes.

As much as it is a worrying issue, as no-one wants to see someone get poked in the eyes, their is only so much precautions that can be taken in a combat sport. Hopefully, a new style of MMA gloves will soon be manufactured to eliminate the eye poke. 😉