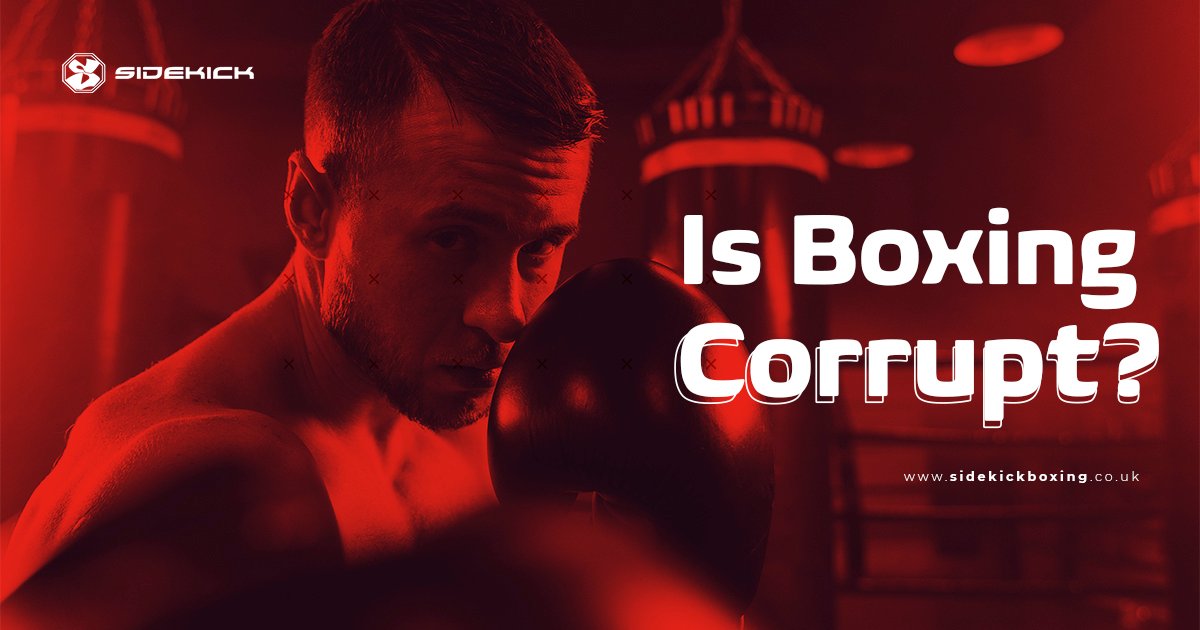 We all have done it; when we watch our favourite fighters, we can be a little biased and say our fighter should have won, even if deep down we may agree with the result and know they didn’t.

But, it is something you should never expect to see from the officials of the sport. It shouldn’t matter who their favourite fighters are; it should still be a fair and even match, as there is a fine line between loyalty and honesty.

Unfortunately, however, it does seem to happen in boxing. If you watched Matchroom Boxing’s last show, headlining Anthony Joshua vs Oleksandr Uysk, many fans were fuming with some of the results.

Why is there Corruption in Boxing?

It’s like most things in life; if money is involved, there will be corruption and the fact that boxing doesn’t have one organisation controlling the sport leaves the people involved to make their success independently. It’s nothing new either, as it’s been going on since the sport started.

The fighter wants to reach the top and earn as much as possible, and one defeat can be an extensive setback on their career. A fighter’s manager wants them to win everything to sell them for bigger and better fights, as it would be tricky for a manager to hype up their fighter if they are regularly losing fights.

The boxing promoter wants to sell as many tickets as possible, and with many sanctioning bodies, they want to keep on the promoter’s side. Also, gambling organisations are responsible for generating a considerable amount of money into the sport through sponsorship and betting.

A particular result of a boxing match would determine how much money bookies would make themselves, so much so, people believe fights can be rigged for their interest.

However, The Boxing Planet suggests that:

‘The sport of boxing appears to be corrupt because there is an overall lack of oversight in the professional ranks. Unlike some other sports like football, baseball, and basketball, there is no overarching governing body to enforce rules on all the actors involved in boxing. In the case of boxing, events are tied to individual promoters and local sports commissions, and many of these operators have shaky reputations.’

Please read our article on betting being bad for boxing here.

As you can see, everyone wants their slice of the pie, but do the judges rig it or is it a genuine mistake?

If you saw the boxing match last weekend, which AJ vs Usyk headlined, it left many fans quite angry with some of the official’s decisions. The biggest upset was Ricky Hatton’s son, Campbell Hatton vs Sonni Martinez. Many suggested that Hatton did not win a single round in their 6 round contest, yet he was awarded the winner.

The fight has caused so much controversy that Paddy Power has refunded all Single Bets on Sonni Martinez to beat Campbell as a free bet after fans felt “robbed” by the decision. Also, in the world title fight between Anthony Joshua vs Oleksandr Usyk, fans had noticed the fight was stopped 5 seconds early in the final round when Joshua appeared to be close to getting knocked down.

Joe Rogan pointed out the claim on his podcast, and the podcaster asked his followers: “Did they ring the bell for the last round early?”

Some of the main reasons for rigging a boxing match are:

However, there are also some positive reasons to rig a boxing match with Short Boxing suggesting:

Way of Martial Arts suggests that there are various reasons why boxing is rigged, however ‘Boxing matches are not fixed in general. At the high-level of boxing competitions and bouts, there is no way a fight can be fixed. But, on the other hand, some low-level tiers of boxing matches can be fixed.’

The History of Match Fixing in Boxing

Although the above suggests that high-level boxing matches are harder to rig than low-level ones, there have still been matches that have been rigged at a higher level. Take a look below at some of the most renowned.

At the time, Arthur Pelkey was the reigning World White Heavyweight Champion. In 1913, he admitted that he had fixed a match in Canada with the help of his manager, Tommy Burns.

Although the fight between Muhammad Ali and Antonio Inoki in 1976 was initially scheduled as a fixed exhibition, the fighters could not reach an agreement on the winner. This meant that the 15-round draw actually became a real fight.

Allegedly, his fights against Sonny Liston from 1964 and 1965 were fixed, but this was never proven true.

confirmed by boxer Sonny Barch, promotor Rick Parker fixed several matches many of which were in favour of boxer Randall Cobb. As a result of this, Cobb later sued Barch for libel and won although the decision was overturned at a later date.

A referee was expelled and an official decision overturned in 2012. It was reported by the BBC that there was a bribery attempt connected to this case.

Of course, there have been other rigged boxing matches, however some of which were just allegations with no evidence to back them up.

Check out this video below for more info about when boxing matches are fixed: