Home>Kickboxing and MMA news and equipment>Kickboxing 1989: Martial Arts in the 80’s 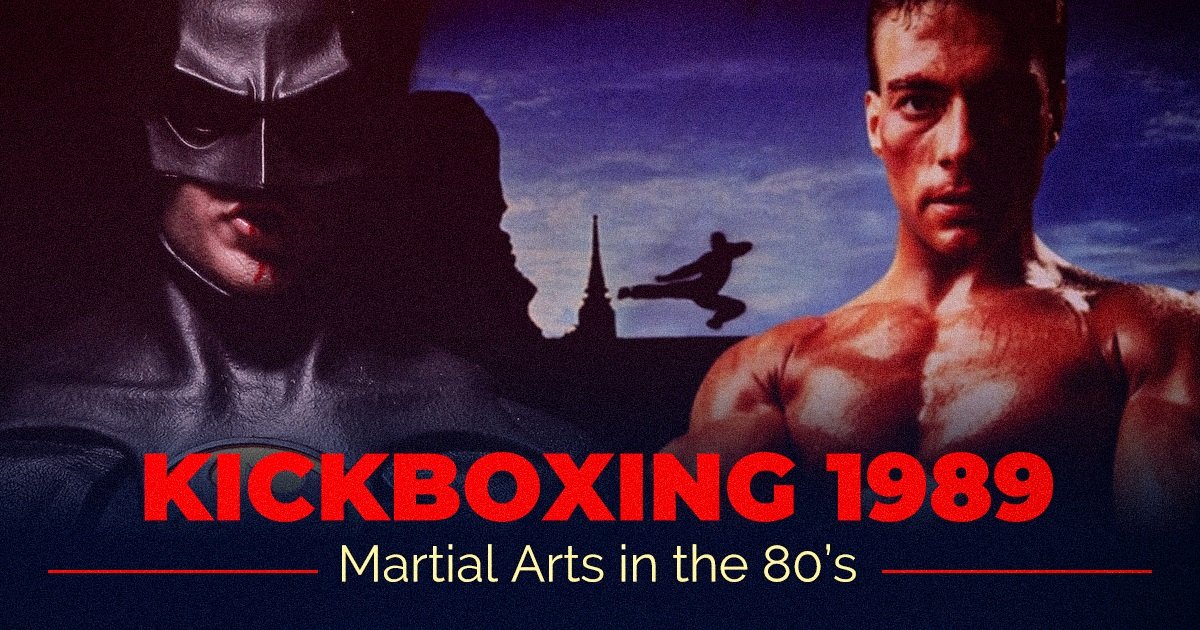 In the 90’s, kickboxing rapidly grew in popularity. Everyone was excited to learn the sport and fight shows were everywhere.

However, kickboxing started in the mainstream in the 70’s, with its large scale popularity beginning in the 80’s.

‘American kickboxing originated in the 1970s and was brought to prominence in September 1974, when the Professional Karate Association (PKA) held the first World Championships. Historically, kickboxing can be considered a hybrid martial art formed from the combination of elements of various traditional styles.’

So, what caused this spike in popularity of the exciting combat sport?

They say movies can influence us and anything with martial arts and superheros in seem to get us hooked.

In 1989, two of the most iconic movies got released and they still get talked about today, Kickboxer starring Jean Claude Van-Damme and Batman, which remains one of the most influential superhero movies of all time.

‘The 80s really took hold of the martial arts craze and America began to produce more homegrown films in the genre. Jackie Chan and Chuck Norris became stars in the 1980s, through American-made martial arts action films. These films enhanced the tournament films, the revenge films, and so on, giving a true 80s sheen to the martial arts genre.’

Check out their 10 Best Martial Arts Movies Of The 80s, Ranked here.

let’s be honest, before we get in to the year of kickboxing in 1989, you can’t talk about iconic martial arts movies in the 80’s without mentioning Bloodsport. Bloodsport is based on true events of Canadian martial artist Frank Dux who is played by Jean Claude Van Damme. It is considered one of the most influential martial arts movies of all time and many also suggest it is the best film Van Damme has starred in.

Bloodsport is about Frank Dux who has come to Hong Kong to be accepted into the Kumite “free fighting”, a highly secret and extremely violent martial‑arts tournament with no holds barred. Frank entered the 1975 Kumite in real life which was an underground style of tournament and it was Frank winning the tournament that inspired the 1988 Bloodsport movie. Frank was featured in the November 1980 edition of Black Belt magazine article, Kumite: A learning experience.

You may be wondering, Batman was a superhero so what has he got to do with martial arts, but in fact he didn’t have any superpowers like Superman, he was a trained martial artist in body armour which aided him to protect the city. If you watch the intro you will see Batman use a fierce sidekick into a criminals chest.

Kickboxer was about a fighter, Kurt Sloane who wanted a revenge Muay Thai fight with Tong Po after his brother, Eric Sloane was left paralysed. Eric was a western style full contact kickboxing champion and he believed he could beat anyone. He naively flew to Thailand to fight the Muay Thai champion thinking it was going to be an easy match, but not knowing the Thai style is completely different.

This is something that always gets debated in real life amongst kickboxing fans, Muay Thai vs Kickboxing: which is better? You can read our article ‘What is the difference between kickboxing and Muay Thai rules’ here.

Dennis Alexio who played Eric was actually a fantastic kickboxer in real life too. Dennis “The Terminator ” Alexio is considered to be one of, if not the, greatest heavyweight kickboxing champion in the sport’s history.

His record is an outstanding 70-2, with 65 wins by way of knockout.

It is easy to say that as they have recently made a remake of the original kickboxer film and many of Batman movies since, that we certainly love martial arts and crime fighting heroes.

Let’s be honest, every man and kid would love to be Batman. Also, some of you may remember Chuck Norris in Sidekicks movie in 1992. The 90’s became a very exciting time for kickboxing, however it was towards the end of the 90’s when full contact kickboxing started to fade out as in 1993.

It was a year that was going to change the combat sports world forever as both K-1 Global and the UFC were both launched, so kickboxing had contributed to the growth of mixed martial arts. MMA was still relatively new in the 1990’s and didn’t spike until the 2000’s and boxing has always been extremely popular, so kickboxing seemed to be gaining the most interest.

Check out this video below of some footage of kickboxing back in the 80’s:

What is your favourite martial arts movie from the 80’s? Leave a comment on our Facebook page here.