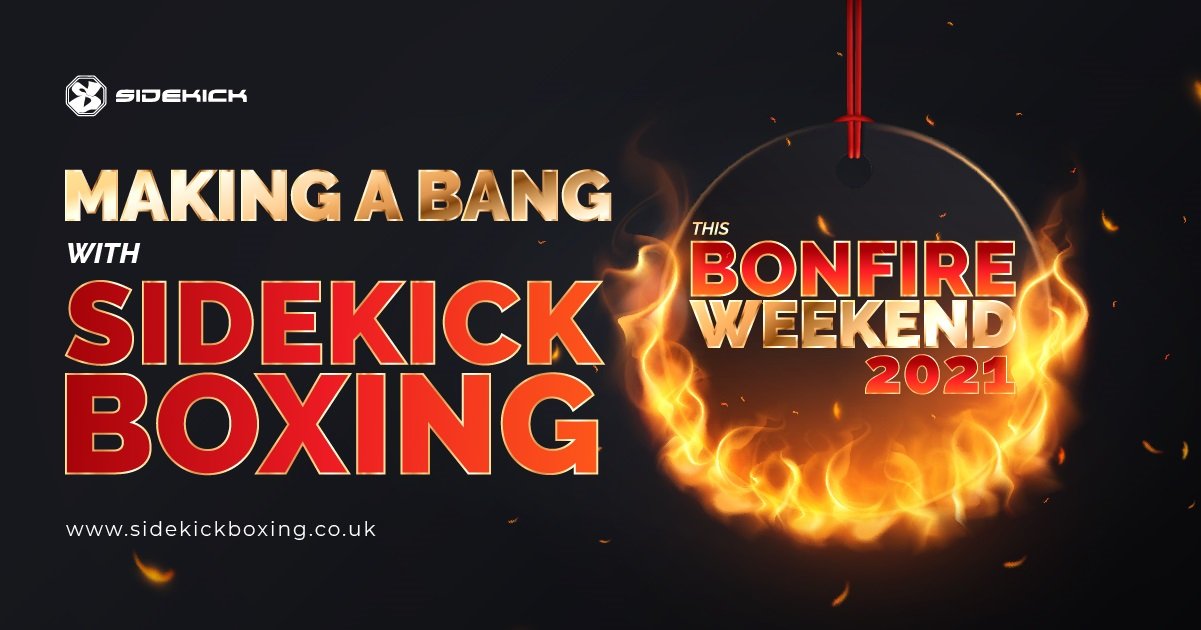 Making a Bang with Sidekick Boxing this Bonfire Weekend 2021

Every year on November 5th, we can’t wait to ignite loads of fancy fireworks, have a big bonfire and eat hotdogs with friends and family, as there is just something about it that fills us with excitement. And if we are really getting into the bonfire spirit, we can even make our own Guy Fawkes, do penny-for-the-guy and chuck it on the bonfire at night.

So, why do we celebrate Bonfire night, and who is Guy Fawkes?

Back in 1605, a Catholic, Robert Catesby, wanted to assassinate King James 1 and plotted to blow up the Palace of Westminster and everyone in it. He placed Guy Fawkes in charge of the gunpowder, where they put it at the House of Lords.

‘Guy (Guido) Fawkes was part of the Gunpowder plot in 1605. He wanted to blow up King James I and his government.

This was because of religion. England was a Protestant country and the plotters were Catholic. They wanted England to be Catholic again, and thought they could force change if they killed King James I and his ministers.’

On Nov 5th, they found Fawkes guarding the gunpowder, which he later confessed to wanting to blow up the House of Lords. The government killed Guy Fawkes for his crime. Bonfire night now gets celebrated every year as a way of remembering how they stopped the parliament from being blown up by having bonfires and firework displays.

In Lewes, East Sussex, they are famous for their fantastic bonfire night displays.

This year’s Bonfire weekend on Nov 6th is an undisputed super-middleweight world championship bout between Canelo Alvarez vs Caleb Plant.

This highly-anticipated fight between both great fighters has all the belts on the line for one undisputed champion. This fight is held at the famous boxing venue, the MGM Grand in Las Vegas. Alvarez, who has only lost to Floyd Mayweather back in 2013, is determined to take Plant’s IBF title and posted on Instagram:

The WBC have announced that a brand new commemorative belt will be awarded to the Canelo-Plant winner. One of the two champions will be walking away with all significant title belts and the new WBC’s commemorative Teotihuacan belt.

Take a look at the video below for more information about this upcoming fight:

Both of these boxers will be fighting in a WBC Super Middleweight title eliminator in a Premier Boxing Champions event from Footprint Center in Phoenix. Although they were both scheduled to fight back on the 28th August, Benavidez tested positive for COVID-19 which means that the fight was pushed back.

‘Also featured on the card will be longtime contender José Benavídez, the older brother of David Benavídez, making his much-awaited return facing Argentina’s Francisco Emanuel Torres in a 10-round super welterweight duel.’

Take a look at the video below for more information about this upcoming fight:

Are you looking to treat your child to something for their favourite sport this Bonfire night? Then, why not get them the ‘Fists of fire’ kids 6oz boxing gloves. These boxing gloves offer a great stylish, safe, eye-catching glove for kids with a great design.

These boxing gloves will be the envy of all the other children and will get them all talking!