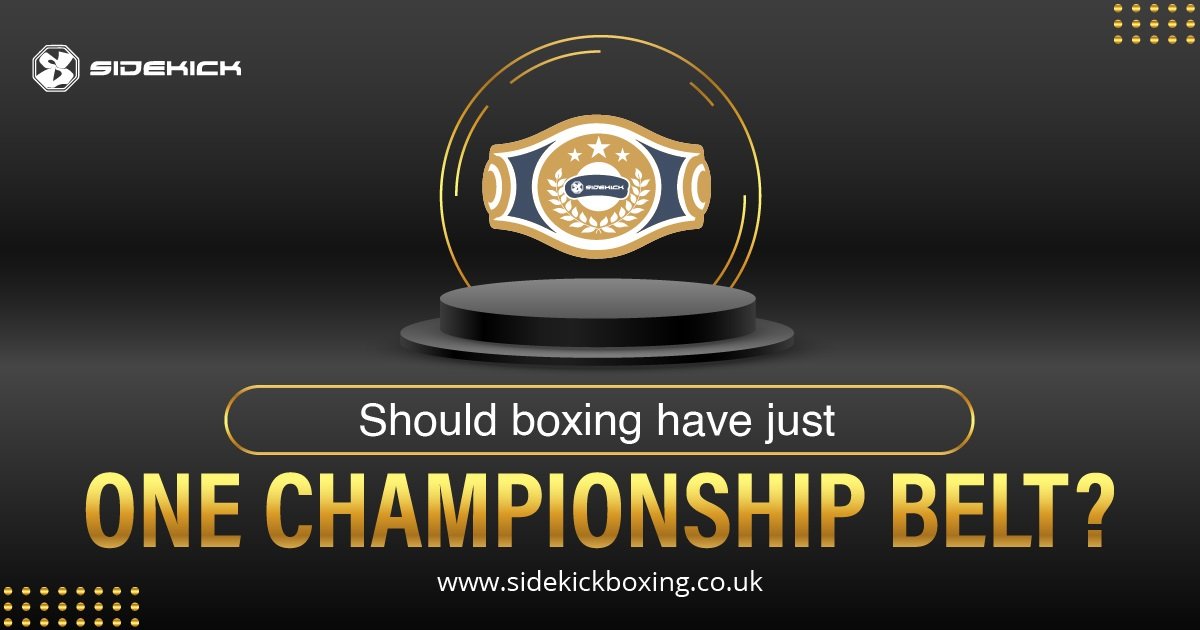 How Many Boxing Belts Are There?

Should Boxing Have Just 1 Championship Belt?

In boxing, there are plenty of sanctioning bodies which award championship titles and belts. However, only 4 of these organisations are considered the major players of boxing, the WBC, WBA, WBO and the IBF. You can read our article ‘Boxing title belts explained’ here.

This means you could have 4 different world champions in each weight class alone. You would expect by being a world champion, you should be considered the best in the world, but this could get overlooked if other fighters also hold an equivalent world championship belt.

Its like having two football World cups the same year with two different countries as champions, confusing ah?

As boxing has no single governing body to govern the sport, it hasn’t got a solid structure and this is why it has a lot of politics.

So, does by having more than one champion make it better or worse for boxing?

Nearly everyone who watches boxing suggest there are too many championship titles and even Floyd Mayweather also made this same claim. However, it is not as black and white as just having one sanctioning body and one champion, as different promoters may choose to work with different sanctioning bodies.

A boxing promoter is one of the most important parts of boxing and without them, there is no sport. Every promoter wants to make their show as exciting as possible by having a sanctioned title main event, but still with credible opponents to make it worthy of. However each promoters expectations can be different, ones main event may not be as worthy of a title as another promoters.

Also, for most boxers, fighting for a title is a great achievement, so much so, lots of promoters say that every fighter now wants their fight to be a title fight. A lot of fighters believe there needs to be something worth fighting for, but with so many belts, the sport is becoming about title holders, rather than having earned champions.

As there as plenty of sanctioning bodies who also need to be seen busy in the sport, it is quite easy to get a championship fight sanctioned and with so many championship belts, It is becoming an issue within the sport, and many joke about there being a mikey mouse belt.

On the flip of that, with many fighters at an expectational level, without all the sanctioning bodies, a fighter may not get a title shot which they truly deserve. This is why the sanctioning bodies now award what is called an interim championship belt. They started to do these belts because as the current world champion can be inactive for genuine reasons for quite some time without having to give up their belt, it was a way of giving two highly ranked fighters a shot at a title.

However, the WBA have recently reviewed their interim belts and are now planning to abolish all of them. The decision was taken by the Championships Committee and is another step in the plan to reduce titles that was announced by the president of the organization, Gilberto Jesús Mendoza, a few weeks ago.

Why is there so many boxing belts?

It’s like most things in life involving money. People want to start there own organisation or brand and hope to be the biggest global player, but in reality, that’s easier said than done. Just take a look at how many boxing brands there are now. As boxing spiked in popularity over the last decade, tons of brands come out the woodwork to be the next big thing, but for many, they don’t offer anything new and exciting. That’s the same principle with boxing sanctioning bodies, they start with all great intentions, but they don’t end up getting the recognition they wanted and that generally is because they don’t have the capital to invest heavily to make an impact.

What is the best boxing belt?

It has always been considered that the WBC belt is the most prestigious, but the four major belts are all generally as equal as each other. For instance, Anthony Joshua is the current world champion and he is superstar of boxing, he holds the IBF, WBA and WBO belts, yet he isn’t ranked in the WBC.

This is why in many of the fight fans eyes, Joshua should of fought Wilder while he was the WBC champion to establish who was the best, rather than fighting lower ranked fighters. Now, as Fury is the WBC champion, we are all waiting for an all British undisputed fight between Joshua vs Fury, which could be the biggest fight in history.

With all the mixed opinions of all the boxing belts, there are pros and cons to both, which we have gone through below:

Let’s face it, the higher the rank a fighter gets the less they fight. A world champion may fight as little as only 2 times per year and with only 2 fighters getting a yearly world title shot, it leaves a lot on the waiting list. If you take Dillian Whyte, he has been waiting over 3 years in-line for a world championship fight and it is still uncertain if he will ever get the opportunity. So, by having more sanctioning bodies awarding world titles, it opens up more opportunities and a chance of a deserved shot at the title.

With multiple world champions it causes a lot of confusion and controversy to who is the champion of the world. As mentioned earlier, if you take Anthony Joshua, Deontay Wilder and Tyson Fury for instance, When Wilder was the WBC, Joshua was the WBO, WBA and IBF and Fury was the undefeated former champion, as he had his belts revoked for suspected steroid use, they had many disputes who actually was the best out of the three fighters and each fan was blaming the other fighters camp for negotiations falling through. However, this could be scene as a positive for boxing as it gives more to talk about.

With multiple championship belts available it can dilute the value of being a champion. A fighter may be a champion in one organisation, but lower ranked in another organisation. For instance, light heavyweight British boxer Lyndon Arthur ranks No1 in the WBO, but No4 in the IBF. This is why The Ring who are an independent boxing organisation, rank the fighters themselves. Also, each sanctioning body may have their own rules and regulations on how they do things, so it might be easier, or a fighter can have less fights under their belt in order to fight for a world title with certain organisations.

You can see the full boxing rankings here.

It can be difficult for two champions to fight due to not being able to negotiate a deal. We all love the thought of an undisputed fight. This is when all the major boxing belts are on the line to have one clear champion. However, with the fighters, the coaches, the managers, the promoters and the sanctioning bodies all stating their T&C’s, it takes a lot for a championship fight to get agreed and finalised.

There has been many sanctioning bodies for decades and it is unlikely to change to one body any time soon and as you can see their are pros and cons to both. Maybe in the future all the major sanctioning bodies may callobrate to work together more closely to reduce a lot of the politics in boxing.