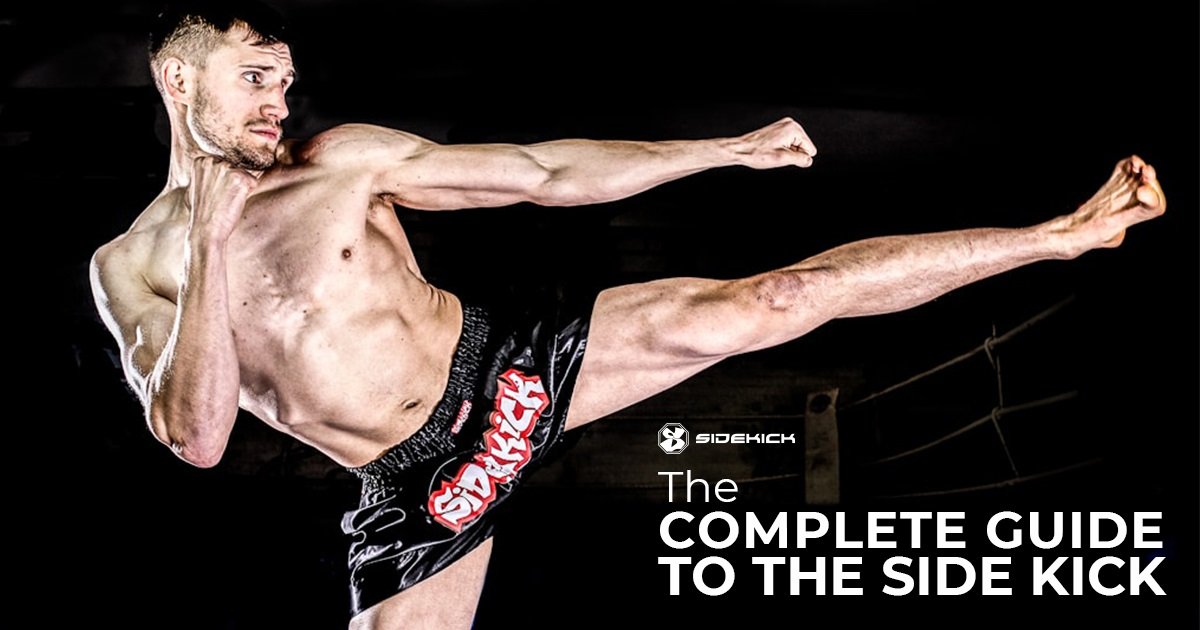 How To Do A Side Kick

The Complete Guide To The Side Kick

With all the different styles of fighting and strikes out there, It would only make sense to write an article about the martial art move, the side kick, especially as we are called Sidekick ourselves. We came up with the brand name Sidekick as it has a double meaning, it is both a kick and means a companion too.

Read our article ‘Where did the name Sidekick come from?’ here.

So, what is a side kick?

The side kick, which is also called Yoko geri kekomi in Karate, is a very effective traditional martial arts kick. As powerful as the side kick is, they don’t seem to get used as often in modern fighting like MMA. This could be because it gets over looked as a powerful weapon and may not incorporate with other MMA training. Also, it generally requires it to be performed from a side stance position, so it is not often used in Muay Thai as they are in more of a crouched forward stance.

You usually see the side kick in combat sports when fighters have come from traditional martial arts background like Karate, kickboxing and Taekwondo. The side kick is usually targeted at either the head or the body, however the body generally is a better target as it is quicker to deliver, making harder for the opponent to telegraph.

Also, it comes at such force, that if landed it will easily put the opponent out and could potentially break a rib. The spinning side kick always looks really impressive in combat sports when it is successfully landed.

Watch the video below to see a spinning side kick land brilliantly on Glory Kickboxing:

The power in the side kick is generated through the legs and hips, which makes it one of the most powerful kicks. While most kicks don’t offer many variations, the side kick has many different ways to perform it.

We will guide you through the basic and some of the advanced side kick’s.

At first you can practice and learn to master the side kick on your own without any kicking equipment, but as you progress and want to start adding power, you will either need a heavy punch bag or a partner to hold a large strike shield. A strike shield has a large striking area and it has really dense padding to absorb the powerful kicks. It is important to understand and get the movement and technique right before going for power.

How to do a side kick

To control the side kick fully, the knee should be tightly tucked into the chest and not out from the body. The heel should be pointing directly out at the target. Thus, when executed, the side kick should pump quickly and powerfully out, then retract back quickly, following the same motion.

Once you have cracked the technique, to deliver more power, it requires more speed and snappier strikes, but it is important to stay in balance and retract the kick correctly.

Here are the steps to do the side kick:

When you hit your target, your kicking foot should be horizontal and hitting the target with the heel and the blade of the foot. If you kick with the toes or higher part of the foot, it won’t be as powerful and could cause an injury. In order to get the most effective kicks, it is important to chamber the kick properly before striking.

What is chambering a kick?

The term chambering comes from firearms terminology when described to place (a bullet) into the chamber of a gun. in a martial arts case, to chamber a kick is when you are fully leaning back the technique to prepare for powering forward.

What are the different types of side kick?

As mentioned earlier, there is a basic side kick and the advanced versions with flying, jumping, spinning and sliding side kick.

Side kick (Without step)

This version of the side kick works effectively in close range for both offensive or defensive strikes, as it is thrown from the stance position with no steps. If a fighter is up against the ropes or wants to rapidly stop a fighter from attacking, this side kick works brilliant, especially as it is quick fired.

In the stance position above, simply pivot your back round so the heal is facing towards the target and lift your lead knee up to the waist at the same time. As you learn back, push out with the kick. Remember your toes should be pointing in the downward direction so you can strike with the heel.

Step up side kick

This kick is to gain some distance on your opponent. Rather than bringing the back foot up to the front foot, bring it around the back of you to get the extra step.

Watch the video below to see how to do the side kick:

The spinning side kick is a great kick for many reasons. It generates lots of power as builds momentum in the spin with all your weight behind it. It also can be a very unexpected strike on your opponent. To do the spinning side kick get in to your side stance position.

From there bring over your front left foot to your right side, pointing the toes backwards. Your body will now be in the position to want to spin. With you back leg bring it round and kick, but always keep your eyes looking at the target. If you want to progress this kick, you can add a jump off the front leg to get extra height.

The side kick is certainly a fantastic kick to learn whether it be for self-defense or to use in combat sports. If you did want to practice it more, it may be good to join a martial arts class like karate, taekwondo or kickboxing and you will have plenty of room to do the jumping spinning side kicks.