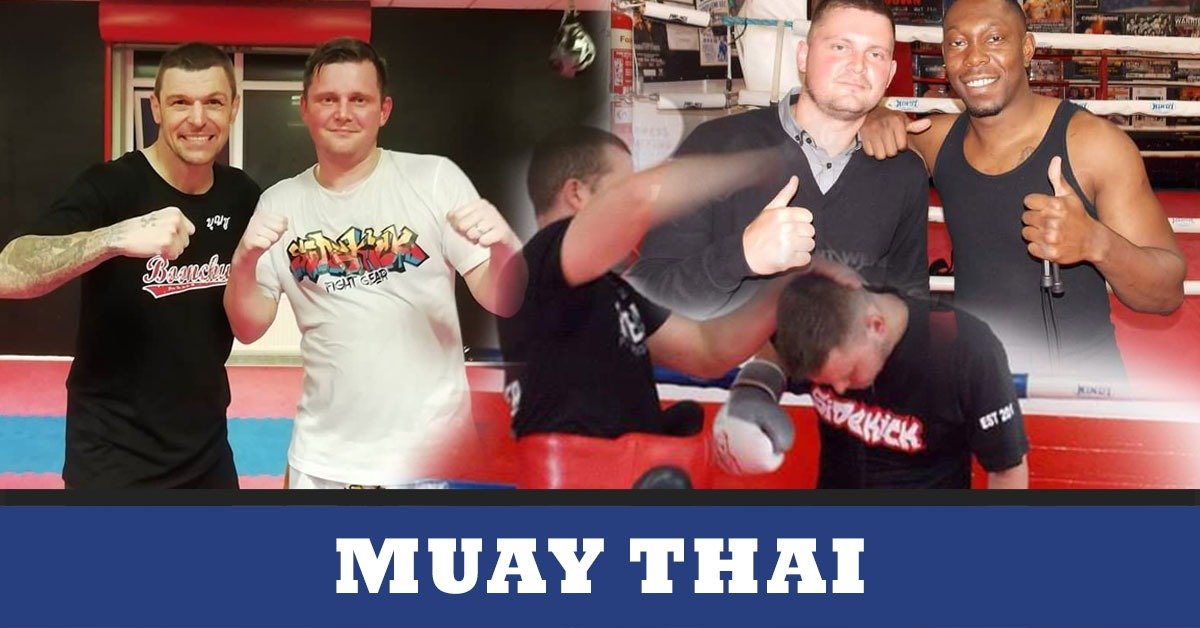 Muay Thai gyms in the U.K

Most fighters, when they’re at their top of their game, they may travel from gym to gym to train with other fighters at the same level. They do this because if they are the best fighter in their gym, they may not get the training or sparring they need from the other members. Also sparring with new people with different styles is a great way to make you more versatile.

One of the best things of running a kickboxing equipment company is meeting great people along the way. As we sponsor fighters and promotions I get to go to kickboxing and MMA shows as well as going to gyms.

When I turn up at someone’s kickboxing club I always make sure to bring my kickboxing kit, I love to get involved.

What is ironic, even though I came from a kickboxing background, I have found myself in some of the top Thaiboxing gyms in the U.K.

Stand and Bang promoter Kyle Greaves invited me to Shin Kick in Woking which is run by Jesse Saunders to their sparring class.

On the way up there I did think to myself am I brave or just stupid as Shin Kick has a lot of top UK fighters at this club. Was I about to get battered?

It was actually quite the opposite, everyone was really nice, especially Jesse. He also gave me some pointers on the Thai clinch.

It took me a while to get settled in and I was sparring with one guy there and he said “You definitely don’t do Muay Thai!”

I would like to think he meant i had a cool fighting style that was unpredictable, or he may of been thinking, “what on earth is this guy doing” lol.

I first met Alan Keddle at a Cage Warriors show in Kentish Town and Alan invited me to his club for a private 1-2-1 session.

It was such an accommodating welcome as before we got started with the class he showed me all his achievements and photos with famous fighters around the gym. He was also UFC superstar George St Pierre’s coach as well as other big names.

During the class, rapper Dizzee Rascal strolls in to start training. Dizzee has been a fan of Muay Thai for a long time and if you watch the song he did featuring Pepper “Scream” for the London 2012 Olympics it was filmed at Keddles gym, along with GSP.

Jamie McGuigan from Double K gym in Hastings invited me to a seminar with Muay Thai legend John Wayne Parr. As I am only in Brighton, it was an opportunity I could not miss.

John Wayne Parr is an Australian Muay Thai world champion and pro boxer with nearly 200 fights under his belt.

I first watched JWP when he was on a TV series The Contender Asia back in 2008, which was a reality Muay Thai fight series.

The seminar was learning techniques to give you more power in your strikes.

It was definitely something I will remember.

Kenshiro is owned by Kenny Moyston and fiance Lily-May in Brighton. Kenny is a big name in the U.K Muay Thai scene so I thought I would treat my wife to one of their intense Thai fitness classes. I don’t think she was too impressed after it was an hour of non-stop action.

We sponsored Cage Warriors signed MMA fighter Kirsty Davis, and as she lived in Bournemouth, she trained at Jeff Lawson’s famous Ippon gym in the heart of the town centre. We had the privilege of going down for the day to train and get promo footage in the gym. Jeff and all the staff are extremely friendly and the gym had a great vibe.

It is great to have experienced training in many of the top Muay Thai gyms in the UK, as every gym have their own way of teaching things. If you get the opportunity yourself, we would recommend training at various clubs as it is a brilliant way to pick up new tricks.

If you would like to read about the equipment used in Muay Thai, read our article ‘What are the best Muay Thai gloves? here.