Home>Kickboxing and MMA news and equipment>What Are The Levels In Taekwondo? 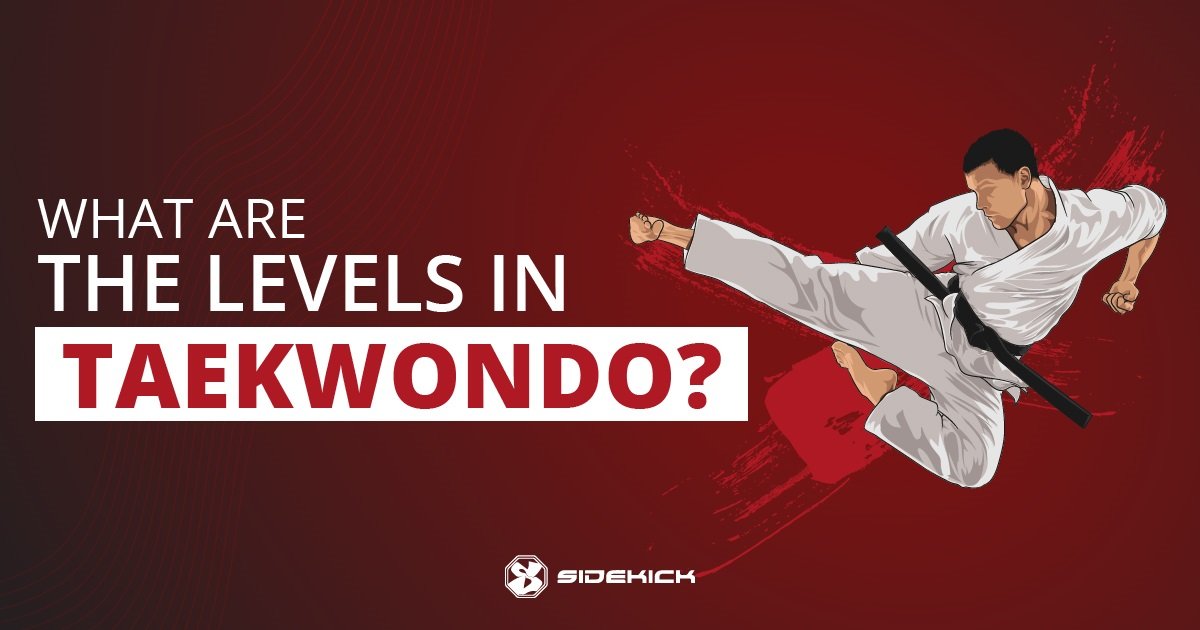 How long to get a black belt in Taekwondo?

What Are The Levels In Taekwondo?

Have you ever seen a martial art were they are all doing crazy spinning jumping kicks and wondered what discipline it is?

The chances are you were watching the Korean martial art, Taekwondo. Taekwondo is a combat sport which started in the 1940’s by experienced martial artists in karate. Since then it has become an Olympic sport and it offers a fast paced, very technical style.

However, in modern combat sports like MMA, which requires destructive powerful striking, Taekwondo sometimes gets overlooked for an effective MMA style. In fact, Taekwondo is actually a great base for MMA, especially for its fast unpredictable movement.

Many people have also believed there is no punching allowed in Taekwondo, but that is not the case, as punches and kicks are both allowed. According to the International Taekwon-do Federation (ITF), in competitions, punches score 1 point, whereas a kick scores 2 points to the body and 3 points to the head, this is why you see more of the flamboyant kicks.

Taekwondo does have a grading syllabus with a coloured belt system, similar to other martial arts like kickboxing and karate, but the belt system has slightly different colours and depending on the organisation they may vary from one to another. A black belt level is called a ‘Dan’ grade, meaning degree in Korean, which is obtained after achieving the coloured Gup grades.

There are 9 Dan black belt grades in total and to reach the 9th Dan can take decades of dedicated training, this is why the Gup grades are referred to as the junior ranks as it is the learning and understanding of Taekwondo. In Taekwondo, the uniform worn is similar to other martial arts which is referred to as a Gi, however in Taekwondo it is called a Dobok, Do means “way” and Bok means “clothing.” The Dobok is tied together with the grade of coloured belt so each student is recognisable in the class.

So, what are the levels of Taekwondo?

The grades of Taekwondo are referred as a Gup (급, also spelled Geup or Kup) which is the colour rank in Taekwondo. Students begin at tenth gup, which is a white belt and advance toward first gup, which is usually a red belt with a white or black stripe. The black belt (1st Dan) is then awarded after the first Gup.

Here is the list of level Kup belts in ITF Taekwondo:

How long does it take between each belt grade?

Taekwondo schools will generally test their students every three to four months. More traditional schools require longer intervals between tests, sometimes it can go up to six months.

The higher the rank, the longer period it is between grades, especially Dan’s grades (After black belt) it can take several years to advance from one Dan to another.

What do you do in a Taekwondo belt grading?

Each school might have a different structure for their grading, however according to the British Taekwondo organisation they suggest that the grading in Taekwondo consists mainly of patterns, ‘poomsae’, techniques and theory. Theory is displayed verbally and expresses information on Korean words, vital information such as the rules of the sport and a general understanding and knowledge of Taekwondo.

Watch the video below to see a mind blowing Taekwondo demonstration on America’s Got Talent:

How long does it take to get a black belt in Taekwondo?

It all depends on how long you spend training in the dojang. In general, it takes around 1200 hours, which is around 3-5 years of training to get a black belt.

Also, it depends on the quality of the teaching and your learning abilities. Some people spend around 6 years to get their black belt, others spend less than 4 years.

In South Korea, there are some schools offering training programs for foreigners to get a black belt within 10 to 12 months of training intensely.

Training is on a daily basis for around 4 hours. Once the training is complete, the student is tested by a national committee.

Many schools in South Korea consider black belt as the end of the beginners’ stage and the starting of the “real” knowledge.

What are the Taekwondo Organisations?

There are many different Taekwondo organizations worldwide and their structure of each may vary between them. Here is a list of the most common organisations:

The British Taekwondo Council (BTC) is recognized by United Kingdom’s Sport and Home Country Sports Councils as the National Governing Body for Taekwondo in the UK. The BTC exists to ensure the safe delivery of Taekwondo through all its Member Organisations.

World Taekwondo was established on May 28, 1973 at its inaugural meeting held at the Kukkiwon with participation of 35 representatives from around the world. There are now 208 member nations. Since 2004, Choue Chung-won has been the president of World Taekwondo, succeeding the first president, Kim Un-yong.

ATA Martial Arts also known as (ATA) American Taekwondo Association. The ATA is a U.S.-outgrowth of Traditional Taekwondo run as independently licensed schools. The ATA was founded in 1969 in Omaha, Nebraska by Haeng Ung Lee, a former Traditional Taekwondo instructor in the South Korean military. The ATA is the organization with the least affiliations in the World, but it has great dominance in the United States.

Grand master Haeng Ung Lee released his own published book “The Way of Traditional Taekwondo” which has the metaphor of the growth of a pine tree to give meaning to the different belt colours in Taekwondo.

Why is it good to learn Taekwondo?

There are plenty of benefits from learning Taekwondo, whether that be to learn a martial art, self-defense or to master those crazy kicks, Taekwondo has something for everyone. Also it can go a long way in improving both your mental and physical health.