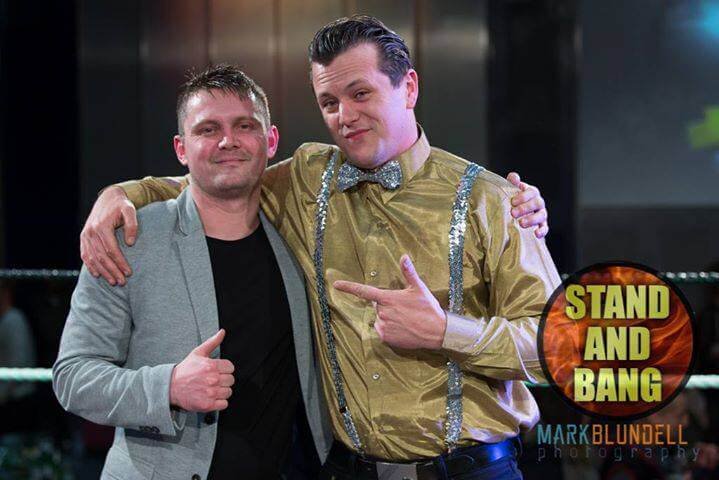 / Sidekick /Kickboxing and MMA news and equipment
Daniel Knight was born at the Royal Sussex County Hospital on the 12th of April back in 1983, he still lives in Brighton and runs his kickboxing equipment company Sidekick alongside his partner Daisy who is expecting his first child soon.

The Sidekick brand has become synonymous with Kickboxing but has spread its wings and also covers Brazilian Jiu Jitsu as well as mixed martial arts equipment. You will see the logo dotted around everywhere as Daniel has never been shy about sponsoring fighters or promotions and has generously given back to martial arts on numerous occasions.

Daniel first started to fall in love with combat sports at an early age, his mother who was a keen Karate practitioner would sit down with Daniel and his brother on a Saturday evening, they would all watch Jean Claude Van-Damme movies together and it became a ritual that Daniel really looked forward too. It also inspired Daniel to seek out a Kickboxing gym and to take up the sport. Daniel’s brother Paul had also taken up the martial arts with his discipline of choice being Judo, interestingly now the Knight household housed students of Karate, Kickboxing and Judo – possibly a little precursor to the evolution of mixed martial arts.

Daniel explained, “my mum helped me find a club, it was called Sama but is now called Kicks”, he reminisced. “It was a great martial arts centre ran by a fantastic teacher called Chris Kent. I went from a novice to a black belt over six years and had a great deal of fun competing on the amateur circuit, I always knew the sport would always play a big part in my life”.

After leaving school Daniel became a Ford automotive refinisher and went on to open his first company which was a vehicle repair centre, Auto Colourworx. Something didn’t feel right to him and It didn’t matter how much success he had there was still an itch that he couldn’t scratch and wherever he went, it followed. In 2010 Knight sold his shares to his partner and embarked on his dream and vision – Sidekick the apparel company was founded.

Things moved quickly, in 2011 not only did Daniel qualify as a professional kickboxing referee, but his new company became a sponsor for the World Kickboxing Federation. The federation sanctioned a world title fight between the 16 x world champion Marlon Hunt and Jamie Bates – Bates also came onboard as a sponsored Sidekick fighter.

Sidekick had quickly become a big player in the Kickboxing industry, it was time to branch out and the lure of the Mixed Martial Arts world was way to big a pool to not cast its rod over. New equipment was designed and then welcomed by the MMA world, soon promotions were using the Sidekick apparel and fighters up and down the country were being seen with the Sidekick logo boldly emblazoned across them.

2012 saw the largest MMA promotion in Europe put on its 11th show, this was to be the first live terrestrial channel showing of mixed martial arts on UK television. Headlining the show on this historical occasion would be the UK’s most famous fighter Alex Reid, a tough bout awaited him in the form of Sam Boo, that night Reid went on to take the win, both fighters were sponsored by Sidekick.

Things continue to grow for Sidekick, recently the controversial character and 4 X world kickboxing Andrew Tate was seen on Channel 5’s Big Brother reality show, he has worked alongside Sidekick for a number of years and continues to be a sponsored fighter.

These are still early days in the life of the Sidekick brand, everyday brings new and exciting deals for Daniel Knight, when asked if he would do anything differently if he could start again, he gave a short and sweet answer, “nothing”.

Daniel feels that the company has really found and cemented its place in the combat industry, with a strong working relationship and growing friendship with fast growing Kickboxing promotion Stand and Bang and its promoter Kyle Greaves, Daniel feels there is plenty more success to come.

“I have been lucky to meet and work alongside some great people such as Kyle Greaves, Alex Reid and future Jiu Jitsu star Kristie Raby to name just a few of many” Daniel said, “these are exciting days at Sidekick but the possibilities in the future are endless, every superhero needs a sidekick, and you won’t find a better one than us”.