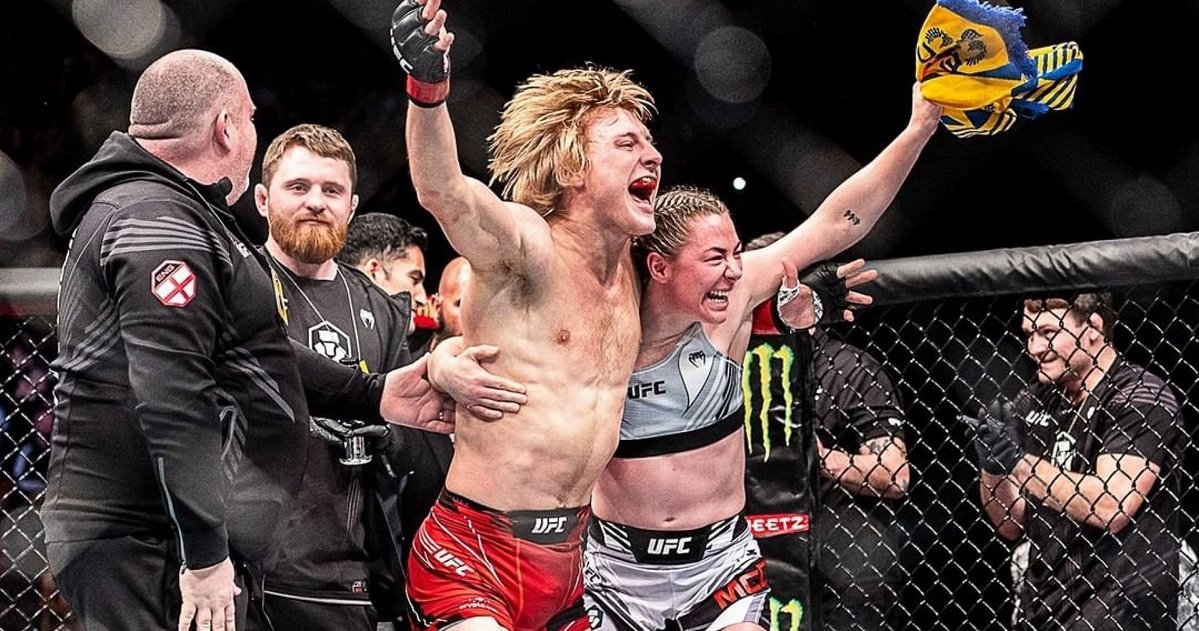 For many, Paddy Pimblett may be a new name on the MMA scene as he has recently been signed to the global fight promotion UFC.

However, the MMA purists, especially in the UK, will already know of Paddy only too well. Paddy has fought on many of the regional MMA shows in the U.K and was one of the biggest rising stars on Cage Warriors.

So, who is Paddy Pimblett?

Paddy ‘The Baddy’ Pimblett is a professional Mixed Martial Artist currently competing in the Lightweight division of the UFC, representing Next Generation Liverpool. He has competed for Olympian MMA Championships, Cage Contender, Full Contact Contender, Cage Warriors and UFC.

Paddy Pimblett’s net worth is currently estimated between US $1 – 5 million, according to Networth & Salary.

Paddy’s first trip to the lion’s den was back in 2012, taking on Nathan ‘Chicken’ Thompson at OMMAC 15 in his home town of Liverpool at just 18 years of age. Victory came within the very first round and the start of one of the biggest success stories in the brutal yet exhilarating world of mixed martial arts began.

A hat-trick of victories across paddy’s professional career brought his exceptional arsenal to Graham Boylan’s Cage Warriors. The place that has held the majority of ‘The Baddy’s’ stand out career moments.

When thinking of all the well renowned faces that have graced the CW cage, Paddy for most, will always stand out as the most memorable and flamboyant Champions ever to grace the London based organisation. Eleven of his nineteen victories in the cage were secured under the CW banner from 2013 to his final bout on the roster back at the tail end of 2021.

During these 8 years, it seems his thirst for Glory was overwhelming. Also taking trips to one of the UK’s finest regional scenes, Adam Teh’s Full Contact Contender. The double trip to Bolton saw Paddy Capture the vacant Featherweight Championship against Kevin ‘The Machine’ Petshi.

He has since kept the organisation in high regard, most recently being in attendance at FCC 29 back in June. A prime example of the pure love for the sport and never forgetting his roots.

His entrance to the grandest stage of all at the UFC was no surprise to many, in my opinion it should have happened a lot sooner. But good things come to those who wait and since taking his first step into the Octagon, Paddy has shot to superstardom with Dana White’s prestigious organisation. Debuting UFC Fight Night: Brunson vs Till.

Paddy faced Luigi ‘The Italian Stallion’ Vendramini which he destroyed the Italian in the very first round.

His next appointment with destiny came just six months later on the UFC’s highly anticipated return to London at UFC Fight Night: Volkov vs Aspinall at the 02 arena.

Many UK based athletes can only dream of a homecoming bout with the UFC, what a moment it must have been for the man from Liverpool to secure his return on his second walk to the Octagon. Rodrigo ‘Kazula’ Vargas fell victim to the well-known submissive prowess of the warriors from Next Generation with A Rear-naked Choke in yet another first round victory.

As the dust settles from Paddy’s 3rd appearance in the Octagon for UFC Fight Night: Blaydes vs Aspinall, the victory against possibly his toughest opposition to date in Jordan ‘The Monkey King’ Leavitt wasn’t what will be remembered for that fateful night at the 02 Arena.

watch the fight in the video below:

Paddy poured out his heart with a message that will ring in the ears of everyone in attendance and the millions watching at home. After losing a close friend to suicide just days before his hatrick of victories, Paddy had this to say.

“Yeah, once again I’m disappointed in my performance lad, that’s not me,” said Pimblett while speaking to former UFC champion Michael Bisping. “In the back, I was firing on all cylinders, that was shit. Pardon my French – I’m better than that.”

“I love each and every single person sitting in this crowd, they’re the best.”

“I want to dedicate this fight to little ‘baby Lee’, a little warrior and more of a fighter than any of us will ever be. But also, I woke up on Friday morning at 4am to a message that one of my friends back home had killed himself – this was five hours before my weigh-in – so Ricky lad that was for you.”

“There’s a stigma in this world that men can’t talk. Listen, if you’re a man and you’ve got a weight on your shoulders and you think the only way you can solve it is by killing yourself – please speak to someone. Speak to anyone.

“I know I’d rather me mate cry on my shoulder than go to his funeral next week.” So please, let’s get rid of this stigma and men start talking.”

With the crisis of the pandemic, suicide amongst UK residents as well as the world has been at a all-time high. Amongst men, as someone who has suffered a lot with mental health, I am so grateful for paddy and all he has been doing to shine some light on a plague that has taken over the mind for hundreds if not thousands of years.

When most would focus on the path ahead and their own personal gain, Paddy has made it his prime objective to give back to his hometown and many charities. In the day and age we live in we are in desperate need of people like paddy, his selfless acts of kindness have saved many lives and will.save many more in the future.

Many believe Paddy’s UFC partner Molly ‘Meatball’ McCann is his girlfriend, but in fact they are just great friends who also train together. The pair have made the UFC a more humble and exceptionally violent place. The team the fans of the Octagon never knew they needed, but now one they just can’t live without.

‘The Baddy’ story has only just begun, I for one am looking forward to witnessing his journey unfold. The UFC has been home to many characters over the years, Michael ‘The Count Bisping’ Conor ‘The Notorious’ McGregor and many more.

We are now in store for another unforgettable addition for future events to come, brace yourselves, Paddy Pimblett may just be what the UFC and the world has been waiting for.