Home>Kickboxing and MMA news and equipment>A Proper Fight: Whiskey Fueled Mcgregor & MGK Have Beef On The Red Carpet At The MTV Awards 2021 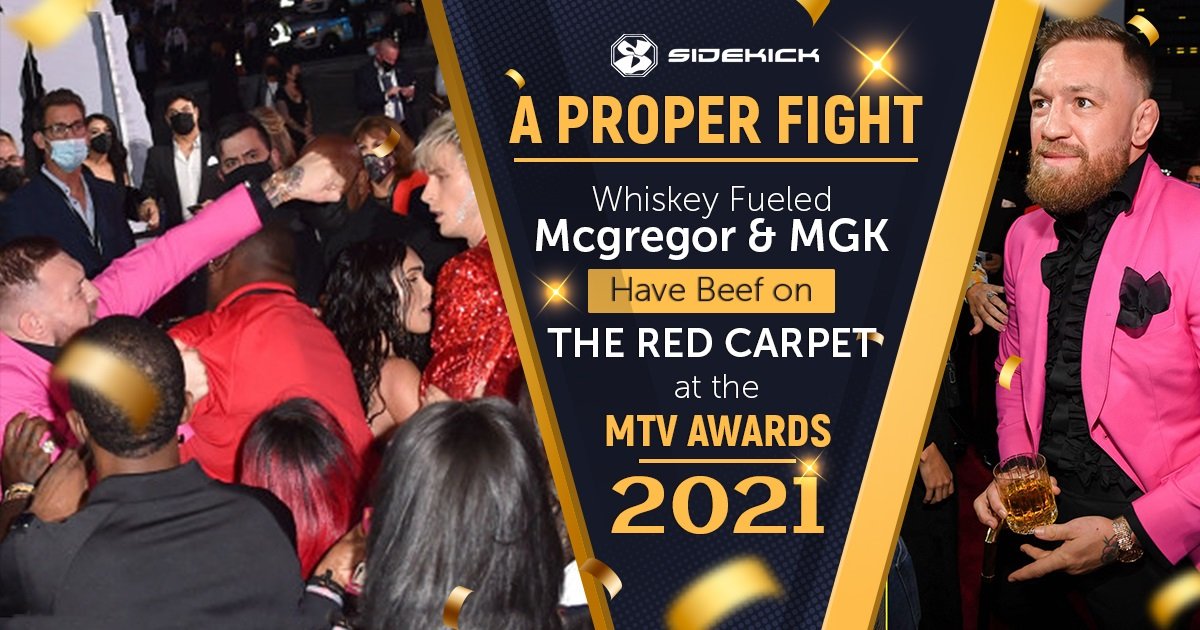 A Proper Fight: Whiskey Fueled Mcgregor & MGK Have Beef On The Red Carpet At The MTV Awards 2021

Two things generally don’t go well together: fighters and alcohol, or not unless you are Conor McGregor, that is. MMA fighter and UFC star had invested his money out of combat sports and launched his own whiskey line, Proper Twelve.

It may seem a very lucrative move, especially for an Irishman, as it would look great for the brand. But recently, he appears to be losing his stardom and getting himself in conflicts outside of the cage. Mcgregor lashed out at movie star Megan Fox’s boyfriend, Machine Gun Kelly (MGK), at the MTV video music awards.

What happened between MGK and McGregor at the MTV Music Video Awards 2021?

As suggested above, there was an altercation between McGregor and Machine Gun Kelly. There are varying newspapers saying different things as to why this altercation happened.

The Mirror suggests: ‘And McGregor himself seemed to be unable to answer questions as to why the pair rowed with his team denying reports he had asked the musician, real name Colson Baker, for a photo.’

MMA Fighting suggests that: ‘According to a report from TMZ, the altercation started after McGregor allegedly asked Kelly for a photo, which was denied. That somehow escalated into Kelly apparently pushing McGregor, which made the ex-UFC champion stumble backward while spilling his drink.’

The Independent suggests: ‘Paul has been pushing McGregor over recent months in an attempt to get the 33-year-old to fight him in the boxing ring, and has now jibed that McGregor is “falling apart” after his defeat to Dustin Poirier.

“Some people are saying that Conor McGregor mistook him for me because we look the same, like blonde hair, little bit tall,” Paul told ESPN.

See the video below by Entertainment Tonight:

So, is Connor Mcgregor drinking too much of his whiskey, or is the bad press getting to him?

When Mcgregor signed to the UFC in 2013, he was the biggest name in combat sports. He had a cheeky, cocky, yet funny personality that every fight fan just loved. He used to rub up all of his opponents with sheer arrogance, but he would back everything up in the cage. He was undoubtedly the man to beat, and he was unbeaten for three years until he met Nate Diaz.

It hasn’t always been roses for Mcgregor as he has certainly worked hard for his success as he used to be on the doll in his early fighting career, and Mcgregor promised his long-term girlfriend that he would make a big-time one day.

2006: Way back in 2006, McGregor first expressed an interest in MMA. Meeting with a future UFC fighter named Tom Egan, Conor was shown the in’s and out’s of MMA fighting.

2007: McGregor has his first fight versus Ciaran Campbell. After winning in the first round, McGregor signed with Irish Cage of Truth and turned professional afterwards.

2013: Making his first UFC debut, McGregor fights against Marcus Brimage winning the match via TKO in the first round.

2015: Shot at the title. McGregor gets his shot at the featherweight title against Jose Aldo Jr., Jose pulls out as a result of injury and faces Chad Mendes for the interim belt instead. Again, McGregor wins in the second round.

2015: Second shot at the title. After the infamous Jose Aldo hadn’t lost in ten years, this fight was a big one. However, Conor quickly ended this fight in just thirteen seconds. This set a new record for fastest UFC knockout in a championship match in 2015.

2016: McGregor loses in the UFC for the first time. Against Rafeal Dos Anjos for the Lightweight belt, McGregor lost via rear choke in the 2nd round.

However, over recent years, he has dropped in popularity, started to receive negative comments, and is on a bit of a losing streak. It looks like it is affecting him personally. In 2018, it was the year Mcgregor launched his brand of whiskey, Proper 12 and the famous title fight between McGregor and Khabib on UFC229.

Things got personal between them as they had manic press conferences and Mcgregor throwing stuff at the bus Khabib was on. Until recently, the insults have gone further than fighters banter, as Mcgregor started to say nasty racial remarks about Khabibs father, who had passed away.

In 2019, Mcgregor punched an elderly man because he declined multiple offers of a drink of Mcgregor’s Proper 12 whiskey, which prompted McGregor to punch him in the face. Mcgregor has lost twice this year, both to Dustin Poirier and the last fight; McGregor snapped his leg.

The Mirror suggests that: ‘McGregor was always a divisive character anyway, with his brash style, similar to Irish pop culture figures like Bono or Roy Keane, the complete antithesis of Irish people’s lackadaisical, non-threatening demeanour on the world stage.

I was in attendance at Bellator Dublin in 2019, just weeks after a video had emerged of McGregor punching a 50-year-old man in a Dublin pub, when he made an appearance to support his friends Peter Queally, Kiefer Crosbie and James Gallagher.’

Security camera footage showed McGregor offering patrons of the bar a sample of his Proper 12 whiskey. However, an older man refused his drink and was punched in the face as a result.

Punching ANOTHER Old Man in the Face

In 2017, McGregor punched another old man in the face after getting into an argument with the man then a brawl broke out in the bar.

Khabib Nurmagomedov slapped McGregor’s friend, Artem Lobov, backstage at UFC 223. As revenge for this, McGregor and his friends flew to New York City and threw a dolly at the bus.

After he lost to Nurmagomedov at UFC 229, McGregor started another brawl. McGregor received a $50,000 fine and a six-month suspension for this.

After McGregor’s friend knocked out his opponent, he stormed the cage. When the referee asked him to leave the cage, McGregor took offense and started threatening him.

An allegation surfaced according to a report from The New York Times in kate 2018. However, the woman involved in this allegation does not want to testify which means that it probably won’t lead to anything in the future.

There are many more of these scandals and the video below shows the whole timeline of McGregor’s rise and fall:

So, what do you think? Is it the drinking that made McGregor swing for Machine Gun Kelly, or something else? Pop your comments in our Facebook post here.