Home>Kickboxing and MMA news and equipment>Boxing vs Muay Thai: Who Are The Better Fighters? 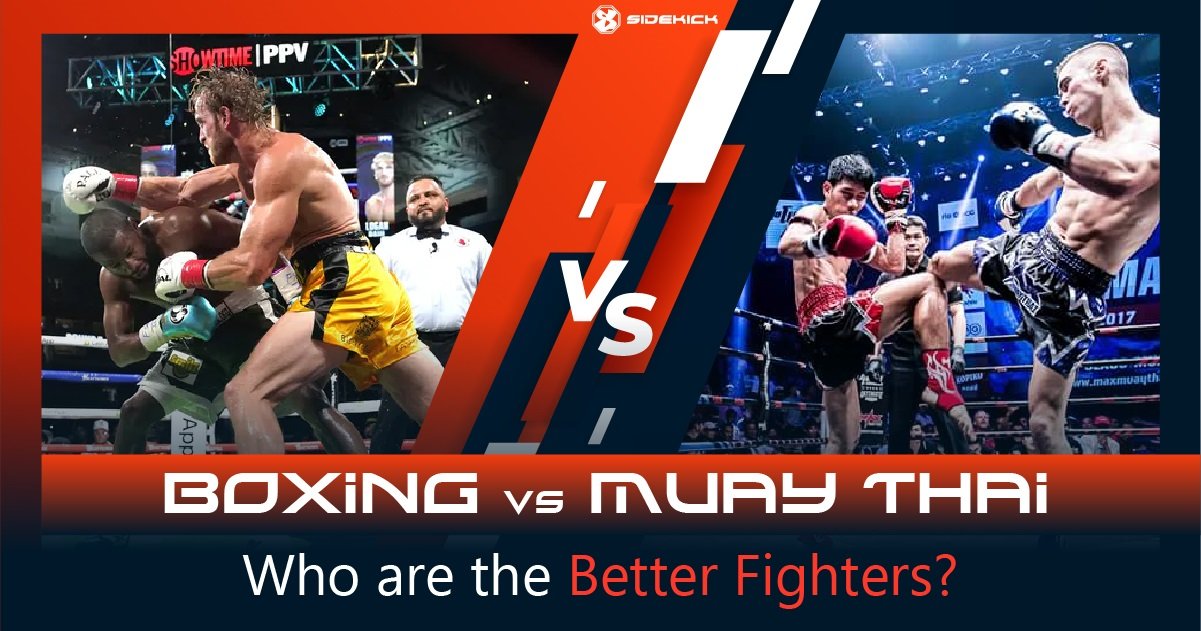 Boxing vs Muay Thai: Who Are The Better Fighters?

Muay Thai originates from the East in Thailand and it uses strikes from punches, kicks, knees and elbows. Boxing on the other hand originates for the west and is solely a punching sport. To learn more about Muay Thai rules, read our article here.

Fighting competitively teaches more than anything and is completely different to sparring in training. In a fight, a fighter is in an unfamiliar venue, a large crowd watching and the nerves of fighting under such pressure makes it incredibly tough. Every novice fighter will say their first fight was so nerve racking and that it only gets easier the more fights you have.

In boxing, we all can’t wait to watch an anticipated world championship boxing fight. The fighters are hyped to the max that we are expecting a spectacular fight, yet the boxers may have had less than 20 professional fights and retire with a total of 40.

in fact, Anthony Joshua had his first World title on just his 16th professional fight and he has already spoke about plans of retiring and he only has had 26 fights.

Whereas, in Muay Thai, fighters may still go for a title early in their career, but many Muay thai fighters have had over 100 of fights in total.

So, why do Muay Thai fighters have more fights than boxers?

Most of the time it boils down to money. Muay Thai fighters, especially in the stadiums in Thailand, get paid a fraction of what the top level of boxing earn, so it is simply a case of having to fight. If you take the biggest names of both sports, Floyd Mayweather earned hundreds of millions in his 50 perfect fights.

In comparison to boxing vs Muay Thai, Saenchai who is regarded as one of the best pound for pound Muay Thai fighters ever, fought almost 7 times more than Mayweather with a total of 349 fights. Saenchai has earned nowhere near the amount of money as Mayweather and globally not as famous either. However, Saenchai still is reknown among the fight fans and has over 1 million followers.

So, how is Boxing and Muay Thai different?

in Thailand, a Muay Thai fighters pay is just about enough to get them by, so they fight a lot and regularly while they are young and fit enough.

Boxing has evolved a lot with huge opportunities for fighters. Up until the 90’s, boxers was still having 60-80 pro fights, but nowadays, with marketing and their promoters building them up, boxers earn a substantial amount of money that they only fight around 25-40 times.

A boxer also might not get the opportunity to fight much as they rely on the promoters scheduling an event with the hope to be on the card. As they fight on huge PPV events, they sometimes state their worth and expect their demands to be met. Boxers want to know What, Where and When before even agreeing to fight.

Boxers also want a high purse, which realistically is totally understandable. A fighters career is relatively short, they need to earn the most while they can. Even Dillian Whyte declined a 4 million pound offer to fight Joshua for the world championship.

Their are boxers that also have had 100’s of fights, but many are journeymen and don’t become legends of the sport. One of the best records ever for boxing is Sugar Ray Robinson. Fighting between 1940-1965, Robinson had 201 fights with 174 wins and won the middleweight Ring titles.

Muay Thai being from the east and boxing from the west, they have totally different fighting cultures and both sports are different in both sides of the world.

Fighting in the West

In the West of the world, boxers might actually fight more than western Muay Thai fighters. This is because, in boxing their is an amateur pedigree and rankings, which their isn’t an amateur Muay Thai circuit in the west. However, they do have their different categories of A, B and C class, but it is still on a pro level.

Fighting in the East

in Thailand, which is the home of Muay Thai, the fight shows are run consistently and as it is not well paid, Muay Thai fighters rack up the bouts and fight a lot to earn as much money as possible. Muay Thai fighters also fight a certain style to avoid injuries. Muay Thai is a national sport, like Football in England, so children are actively fighting from a very young age and most of the fights are junior fights until they reach 15-16 years, then they can fight in the stadiums. Thai fighters have an average fight career of around 4-6 years to.

In Thailand, a lot of Muay Thai fighters just appreciate the privilege of fighting at a famous stadium or a great opponent and accept what is offered, just to earn enough to get by. Thailand don’t have the luxurious gyms as you would expect to see in the Western hemisphere. They may have the beautiful beaches, but many of the gyms are real spit-and-sawdust style and look like wooden shacks.

A Muay Thai fighters lifestyle can be really challenging in itself. Muay Thai legend John Wayne Parr said on his Facebook post how tough he had it in his early days of fighting:

“From 1996 at the age of 19yo my only form of income was through fighting.
Moving to Thailand my first few fights were for $50 a fight.
It wasn’t much, but if I lived like a Thai only eating rice or noodles I could survive until the next fight came along.
When times got tough, I would have to borrow money off my Thai friends who trusted me enough to pay them back straight after the next fight.
Living in Bangkok in 1997, I had 9 fights in 12 months. Just as I’d be down to my last few hundred baht, another fight would come along getting me out of trouble.
Being a fighter isn’t easy. But I was willing to sleep on a wooden floor and wipe my butt with my hand & water just to follow my dream.
So happy it worked out cause there was no plan B”.

So, are Muay Thai fighters better than boxers?

As mentioned eatlier, each fighter are the top of their own sport. Boxers don’t need to fight as much anymore because of the amount they get paid and also the health and safety concerns of the sport like Chronic traumatic encephalopathy (CTE).

As far as skill is concerned, a Muay Thai fighter could comfortably transition to boxing, but if a boxer transitioned to Muay Thai, they may be in for a bit of a shock with the completey different style.

If you would like to know how Muay Thai compares to MMA, read our article ‘Muay Thai vs MMA’ here.