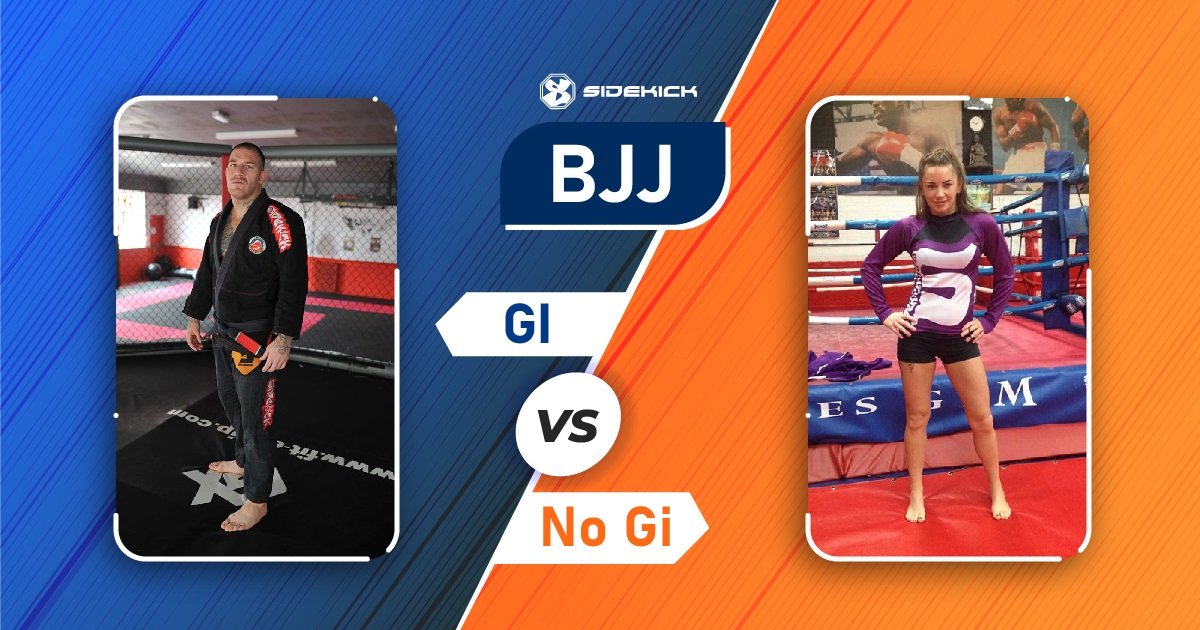 Brazilian Jiu-jitsu | Gi vs No Gi

Brazilian Jiu Jitsu (BJJ) is a traditional martial art that has gone back for many years. It is very different to other styles of martial arts which use attacking strikes like punches and kicks, as BJJ is a ground-based discipline that focuses on close-contact “grappling” holds and the application of chokes and joint-manipulations.

In BJJ, the uniform is a high GSM of cotton in a two piece suit of trousers and a jacket. The trousers are very loose around the waist which are then able to be tightened by a drawstring and the cotton jacket is secured with a martial arts grading belt.

Over the years, the huge popularity in MMA has made a No-Gi version of BJJ really popular.

No-Gi is basically with shorts and a rash guard instead of the more traditional Gi. No-Gi BJJ doesn’t have graded coloured belts worn, instead it has rash guards with the colour of the students rank. IBJJF suggests that the rash guard should be either black or white and have at least 10% of the rank colour(belt) to which the athlete belongs. Shirts 100% the colour of the athlete’s rank (belt) are also permitted.

Gi vs No Gi

Usually, if you start training in BJJ without the Gi, then you might find it much harder to adapt to the Gi. The Gi BJJ has more grips and throws whereas no gi focuses on other aspects of BJJ. For example, more brabo chokes, guillotines, footlocks than in the Gi.

Over the years, Sidekick rapidly grew in our stocking of MMA equipment and we also came part of the BJJ community sponsoring BJJ champion and MMA fighter Tolly Plested. We made our Sidekick Gi for him and his team to be worn in his club in Eastbourne along with custom designed basketball style vests for non-Gi training.

Daniel from Sidekick, who has only ever trained in kickboxing, joined Tolly’s No-GI MMA class. It wasn’t long before Daniel realised how effective it is. He says he was: ‘Seconds from going to sleep’, after Tolly got him in a neck choke during MMA sparring. That is probably what you would expect when a novice decides to grapple with a black belt in Jiu-Jitsu.

So, what are the levels in BJJ?

BJJ doesn’t have as many coloured belts compared to other martial arts to reach a black belt, as it starts at a white belt and you are only 4 belts away from achieving a black belt. However, don’t get too excited as that can be easier said than done, as it is one of the hardest disciplines to reach that level and can take around 7 years or more to get the black belt.

During each belt, a student gains white stripes on their current belt as intermittent grades and they need 4 white stripes before grading for their next coloured belt. Further more, the black belt isn’t the highest rank, as in fact there are a total of 8 belts and it is actually a red belt that is the highest rank. To get the red belt, you are considered as a grand master and it takes over 30 years to achieve with a minimum age of 67 years.

After the black belt, it goes up in levels of degree and when a student reaches the 7th degree, they are awarded a Black/Red Coral Belt. This 7th degree belt is awarded to Jiu Jitsu masters who have been active black belts for over 30 years, so it has its own unique black/red belt. The 8th degree is a white/red belt before reaching the final red belt which is for the 9th and 10th degrees.

There is quite a bit of difference between the youth and adult coloured belt rankings, especially as juniors cannot achieve a black belt. Juniors still start at a white belt and progress through 13 belts in total to they reach the green/black belt. The green belt is the highest belt rank that a BJJ student can achieve before turning 16. A child with the rank of green belt is highly advanced in terms of technical BJJ skills. When a green belt student turns 16, they generally will be promoted to blue belt.

To learn about the levels in other martial arts read our articles:

‘What are the levels in kickboxing?’

‘What are the levels in Taekwondo?’

What are the main differences between Gi and non-Gi?

Clothing: The main difference between the two is the clothing that is worn. In Gi, you will wear a BJJ Gi, however in non-Gi, it will be tighter-fitting shorts and a t-shirt or a rash guard (depending on your preferences).

Grips: As detailed above, in Gi, there are more opportunities for grips from your opponent. A grip that is commonly used during Gi is the collar and/or sleeve grip. These types of grips give fighters a great deal of control during the fight and are a great way of making an opponent submit by using their own Gi.

However, with a non-Gi fight, there is much less room for these types of grips. It is more based on wrestling grips such as neck grips and grabbing outer joints in the body. Non-Gi fights are typically less controlled than Gi fights.

Strategy: Similar to above, there are quite a few differences between Gi and non-Gi fights when it comes to strategy.With No Gi, BJJ is often faster-paced as a result of less grips. Non-Gi has a limited number of submissions and utilises more guillotines and brabo/darce chokes as well as using more foot locks instead of grips.

In Gi, the style is more based on the numerous grips (as talked about above)for example lapel or worm guards. Gi fighting has evolved to include the item of clothing worn and is therefore much slower paced as a result of the natural friction of the fabric.

Both styles of BJJ are fantastic. If you like the more traditional appeal to martial arts, than the Gi BJJ would be more appropriate. However, if you like the thought of maybe competing as an MMA fighter, than the No-GI BJJ style might be better suited for you. To read about our previous BJJ sponsors, read our articles ‘Tolly Plested BJJ for life’ and ‘Kristie Raby joins the Sidekick team’