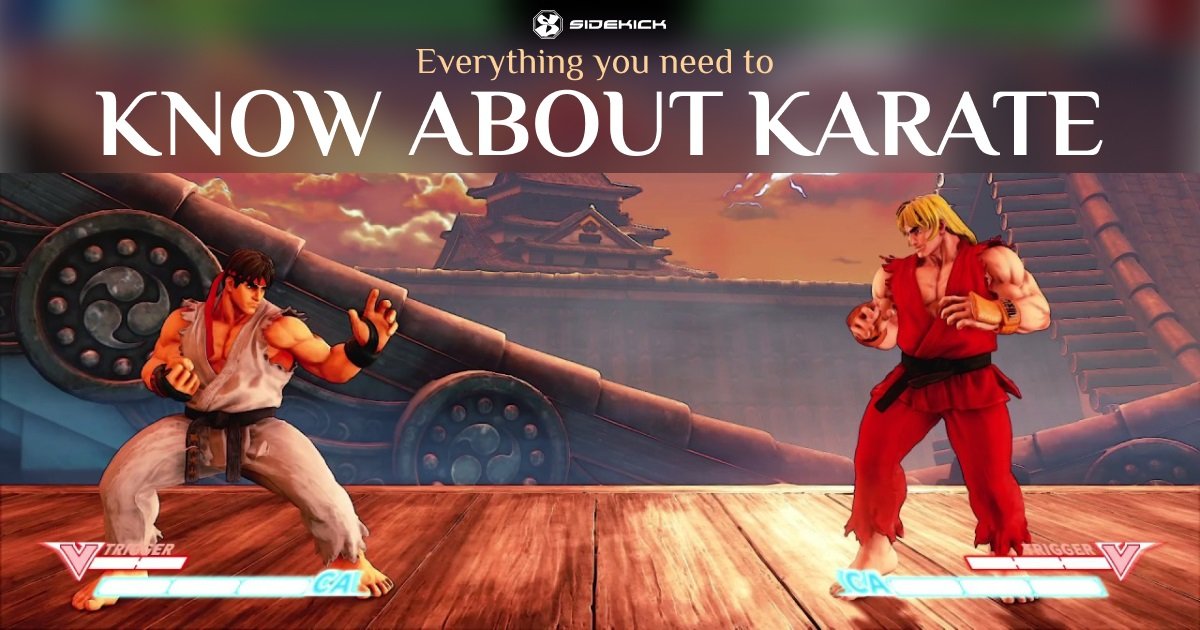 Everything You Need To Know About Karate

In the ’80s, the iconic movie ‘The Karate Kid’ set the trend in the martial arts world, as it inspired many to step into the Dojo and learn the ancient art of Karate. Karate was once ‘the martial art to learn, it was effective for fast striking and its solid defence, and if someone was a black belt in Karate, no one wanted to mess with them.

However, with the forever growing combat sports like MMA, which can seem extremely brutal, Karate doesn’t seem to get the recognition it deserves and spoke about as much today.

Karate is an ancient Japanese martial art that uses empty hand striking and defensive blocking. It has various teaching styles and has a belt grading syllabus from white belt to black belt.

Check out this video below for more info about what is karate:

Is Karate a Good Martial Art to Learn?

Karate in the ’80s was a huge craze, and nearly every parent took their kids to Karate. It was an excellent self-defence martial art and a very respectful discipline; Karate made people full of confidence.

A lot of the popularity came from the famous Karate kid movie as it commercialised the traditional martial art, and people also wanted to learn how to kick-arse themselves. Please read our article about inspiring martial arts movies in the ’80s here. Back then, someone who knew Karate would be confident in handling themselves in a real-life situation because if someone hadn’t learned Karate or even boxing, chances are they wouldn’t be skilled enough to fight.

However, nowadays, with the rise in popularity in martial arts, it is not uncommon for someone to have learned some form of martial arts. Time has evolved, and MMA has dramatically changed the martial arts industry that many believe Karate is no longer practical compared to other disciplines. Yet, in reality, if Karate worked then, it certainly would work now.

So, Why isn’t Karate as Popular?

There are a few reasons why Karate is not as popular as it once was. Some of it comes down to people’s image as many are not as keen to practice Kata’s wearing a white Karate suit. They would rather wear more trendy fight wear in a modern fight club. Not only that, but for people who just want to train rather than going through the Karate belts order, starting at a white belt progressing to black only takes years of dedication.

It simply comes down to the individual’s personal preference as Karate is taught for discipline and self-defense, whereas combat sports are to fight competitively.

The first Karate Kid film was screened in 1984. It had a classic storyline of Danny Larusso standing up to the bullies.

‘This film’s art consists entirely of hiding the cynicism of its calculations under an agreeably modest and disarming manner.’

The Guardian suggests that ‘The creators of the original Karate Kid film (and the three sequels, cartoon and TV series that followed) couldn’t have meant for it to steer athletes into a career of professional fighting, as mixed martial arts didn’t even exist in the States at the time. Yet, nearly a decade after LaRusso crane-kicked his way to victory at the All-Valley Karate Championships, Daugherty – by then an accomplished 18-year-old amateur kickboxer – fought at UFC 2 in Denver, Colorado.’

Never Back Down had a very similar story to the Karate kid but with a modern twist of mixed martial arts. Jake Taylor moves to a new town for a fresh start after continuing to get into trouble from the anger over the loss of his dad.

It is a martial arts action drama starring Sean Faris, Djimon Hounsou and Amber Heard. Troubled teenager Jake Tyler finds a purpose when he discovers mixed martial arts. It also proves useful in getting even with the bully who’s humiliated him.

Although the movie didn’t get brilliant reviews, it is said to have influenced many younger people into pursuing martial arts. Wesley Morris of the Boston Globa suggests that:

‘The movie is interesting for what it implies about Jake and Ryan and their friends. When you take a show like “The Ultimate Fighter” and give it a plot and some acting, the violence is no longer just a sport.’

The 2010 remake of the Karate kid starring Jaden Smith was based on Kung Fu rather than Karate. It seemed the film producers used the Karate kid title as a marketing strategy to gain interest from the previous success of the former movies. Let’s face it; the Kung Fu kid doesn’t have the same ring.

The Karate scene had recently come back to life when the new Karate kid remake of the Cobra Kai series is featured on Netflix and originally Youtube Red. There was undoubtedly a generation who couldn’t wait to relive their youth. Cobra Kai starred many of the original ‘The Karate kid’ actors but all grown up, crossing their paths once again. Cobra Kai became a huge global success, reviving the Karate scene because of it’s popularity.

Cobra Kai is the most popular karate-focused series being made today and has been renewed again for at least five series already. Season four has already been released on the 31st December 2021 and season 5 is coming most likely next year sometime (twoards the end of 2022).

Digital Spy interviewed Josh Heald (the show’s producer) and suggested that it will be “another enormous season with a lot of new flavours and a lot of things that you haven’t seen before yet on the show,” adding, “And it’s not the end.”

Check out the trailer for season 4 Cobra Kai below:

Karate is a fantastic martial art to learn. It teaches all the fundamentals of defending yourself and striking effectively. Not only that, the Karate emphasis is to master the techniques and to progress through the Karate belt order to a black belt, it is very well deserved. If you look at any fighter who has came from a Karate background, their skill shines through. To see how Karate vs kickboxing compares read our article here.