Home>Kickboxing and MMA news and equipment>Fight Off Your Demons With Kickboxing! 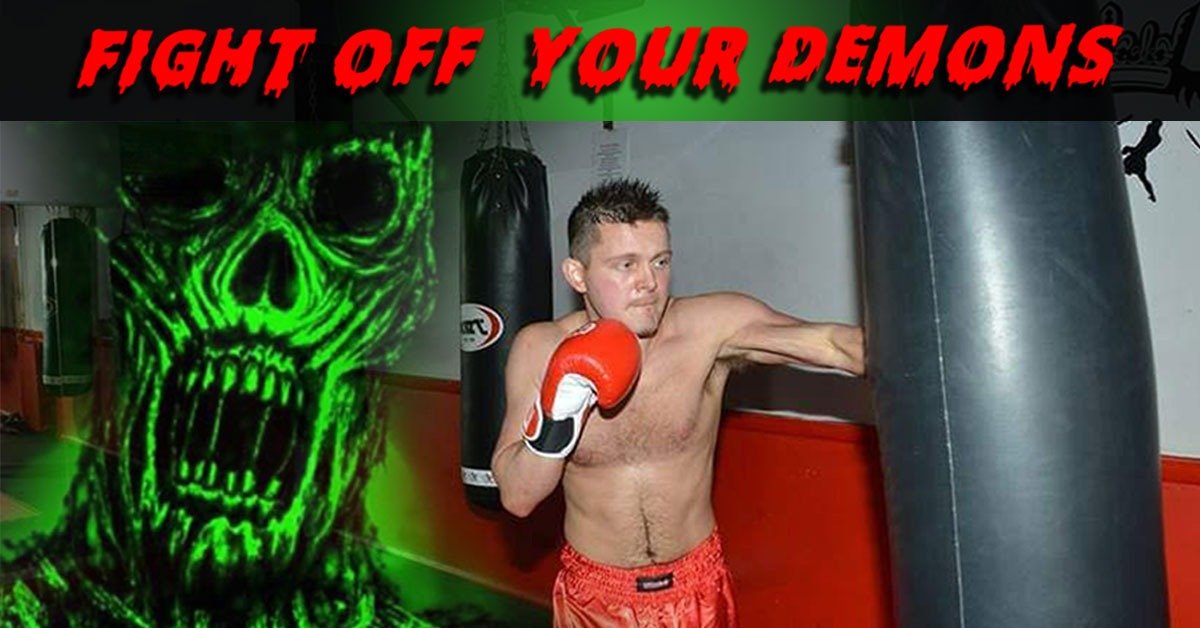 Fight off your demons

Fight Off Your Demons With Kickboxing!

Kickboxing can be more beneficial than just getting you fitter and stronger while learning a martial art. It can also help you get through tough times you may face in your life.

Daniel Knight, the owner of Sidekick Boxing explains below how kickboxing helped do just that for him.

Daniel: ‘The very first time I went kickboxing was when I was a young teenager. My Mum took me as she always loved martial arts. But, like any typical kid, you moan about going each time and they give up taking you.

10 years later, I had a calling to go back. My whole life I have been the furthest away from a fighter as you could imagine and I was always a very happy-go-lucky child.

Setting Up My own Company At 23 Years Old

At 23 years old, I set up my own company, which was a vehicle body repair centre. I started this company as I was a qualified vehicle refinisher after doing my apprenticeship at a manufacture main dealer. I also had moved out of my parents home, so it was this responsibility that made me feel I needed to let off a bit of steam.

I came home after work and got out the yellow pages and looked for local clubs in Brighton for kickboxing.

I came across Kicks Martial Arts Centre which had the same address as the club my Mum took my took when I was younger but had changed name.

It was at this point that I realised the impact kickboxing was about to have on my life.

I really took to kickboxing from the start. The fact that kickboxing had a grading system really helped increase my enthusiasm and I couldn’t wait to get my next belt.

I took up kickboxing because I wanted to toughen up a bit as I wanted to know I could handle myself if I was ever in a situation. It was when I was grading for my orange belt- that is when you have to spar- I knew it was only a matter of time before I got punched in the face.

No Option to Quit

There was no option to quit at this point after everything I had achieved and learned. So what I did was buy all the kickboxing sparring equipment and just get on with it.

This was very daunting for me as I’m the sort of person that would apologise after punching them to make sure they’re alright.

After years of training nearly every day I grew confident in sparring and it became second nature to me. At times, it could get heavy but the idea of sparring is to be controlled to develop the skill.

At this point, my life was about to turn upside down and it was thanks to kickboxing that it gave me the focus I needed.

My Auntie passed away to cancer and I lost my current job after selling my company, I felt nothing but rage on the inside. All I wanted to do is train and hit pads as hard as possible.

I have been recently reading Tyson Fury’s book “The Furious Method” and it is easy to see how people can fall in a dark place of no return.

For me, it was the constant training that worked me through it.

When I graded to a brown belt, I was in the advanced kickboxing class and my coach wouldn’t go easy on me. He was always critical of my performance, but I think he was trying to break me for me to come back stronger.

It is a strange feeling to be in this tunnel mindset, I felt nothing could hurt me. I remember asking my coach, Jim, who was a former professional kickboxing champion if he wanted to spar.

Jim replied: “Dan, why do you want to get hurt?”

Dan: “If you not going to train with the best, you’re never going to be the best.”

As weeks passed, my friends at the club could definitely see a change in me, I was getting bigger from the weight training I was doing at the weekend and sparring was heavy. I was even questioned in the changing rooms one time I recall.

I always would turn up at class 10 minutes early to get that bit of extra training in. I found in kickboxing the speedball was not used in class as much as it could be, so I used it then.

As time passed, my anger was passing and was getting more and more confident in myself. I thought I could take on the world.

I realised what kickboxing had helped get me through, so I couldn’t imagine a future without it. As from a young age, I have always been fascinated by businesses I thought having my own brand of kickboxing equipment would give a life long in the sport.

I never would have thought that I would gain my black belt, qualify as a referee, and train with some of the biggest names in the sport, let alone having a brand that is recognised throughout the UK.