Home>Kickboxing and MMA news and equipment>Floyd Mayweather vs Logan Paul: Is It Good For Boxing? 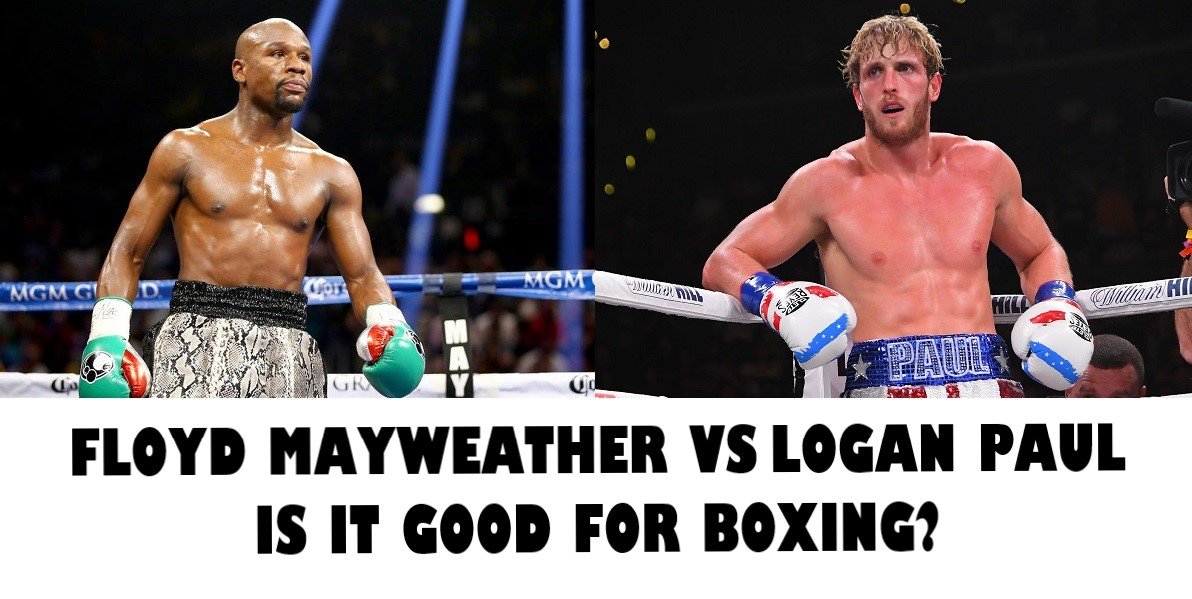 Floyd Mayweather vs Logan Paul: Is It Good For Boxing?

If you have any social media accounts you would have seen two particular brothers that have recently entered the world of boxing and have definitely made themselves heard.

The Youtubers, Jake Paul and Logan Paul, love them or hate them, they are regularly making headlines and have rustled a few feathers and have upset some of the biggest names in boxing.

Logan Paul has a boxing record of 1-0 and he is has called out one of the pound for pound best fighters of all time, Floyd Mayweather. Floyd has accepted the fight and it is scheduled for the 6th June 2021. Ahead of the fight Logan has been quoted saying:

But, are these kinds of antics great for the sport, or is it demolishing it for the real fans?

Many people say they shouldn’t be boxing but surely if one wants to box, you can’t stop them. When you think about it, they are the ones brave enough to call out the big names. It is not the fighters the fans want to see so it is understandable they shouldn’t be a main event, but it’s not the Paul brothers that are doing anything wrong as anyone wanting to progress in a boxing career would love to be in their position.

This is why names like Tommy Fury is calling out Jake Paul, but as crazy as it sounds, Tommy hasn’t got a big enough profile yet to fight the likes of Jake. It goes to show that boxing is about selling tickets rather than the quality of fighters.

Check out this video of the highlights of the fight between Logan Paul and KSI:

So, how are the Paul brothers getting the big fights?

It’s for two reasons really. One, they have millions of fans and followers that would generate a huge amount of money.

Even Mayweather suggests this may be the case, revealing that:

“He has a huge following,” Mayweather said about his opponent who is 18 years younger. “Big guy, strong guy.

“This is fun, it’s entertaining. It’s all about entertainment. On social media, he entertains the people.”

The other reason is boxing, as mentioned in another article, doesn’t have a governing body that controls and prevents these types of fights from happening. You just look at Premiership Football and how it is structured, each team plays each other twice, one on each pitch (a double round-robin system). The most points wins!

In boxing, unless it is a mandatory for a sanctioning body, which sometimes can get overturned, a fighter can generally pick their opponent. The latest waves from the Paul brothers is that it has recently been announced that Logan Paul is going to fight the boxing legend floyd Mayweather in an exhibition bout.

But, is this putting both Mayweather’s legacy and boxing as a sport in jeopardy?

Let’s be honest, Floyd Mayweather is doing it for one reason only and that’s money. He hasn’t got anything to prove in boxing so why does he need to do it.

Logan Paul and his brother are trying to get as famous as possible and getting the opportunity to fight Mayweather cannot be missed. Unfortunately, it offers very little for the boxing fans who pay their hard earned money for the PPV fights and as much as we can pretty much predict the outcome we are still interested to see it live, so many will be tuning in to buy it.

Why do these types of fights happen?

As mentioned in a previous post ‘boxing title belts explained’ there is not a governing body which controls the sport of boxing. So, fighters can choose who they would like to fight as opposed to made to fight.

This doesn’t happen in other sports as you don’t see Manchester United wanting to play a Sunday league football team for easy wins as it doesn’t prove anything.

It still is quite risky for Mayweather, of course he is going to get paid probably 100 million but what if he does get caught?

That of course is extremely unlikely with his record but has he been training hard, is he in the condition he once was and he has to stop doing these fights one day as he will come a cropper.

Check out this video below for some UFC Fighters thoughts on Logan Paul’s fighting career:

Although fights like these are clearly put together for money and entertainment reasons, we will see what the outcome is after the fight.

Sky Sports ( who will be showing the fight live on Sky Sports Box Office from the Hard Rock Stadium in Miami Gardens on June) suggest that:

We’ve covered many of Mayweather’s sensational victories over the years, including that fascinating clash with Conor McGregor, and we cannot wait to welcome back a boxing legend who always guarantees showmanship and razor-sharp skills.

Of course, we know Logan Paul well too, having showcased his hugely entertaining YouTube grudge fight with KSI, and he’ll be determined to emerge with his reputation intact from a daunting challenge against the majestic Floyd Mayweather.”