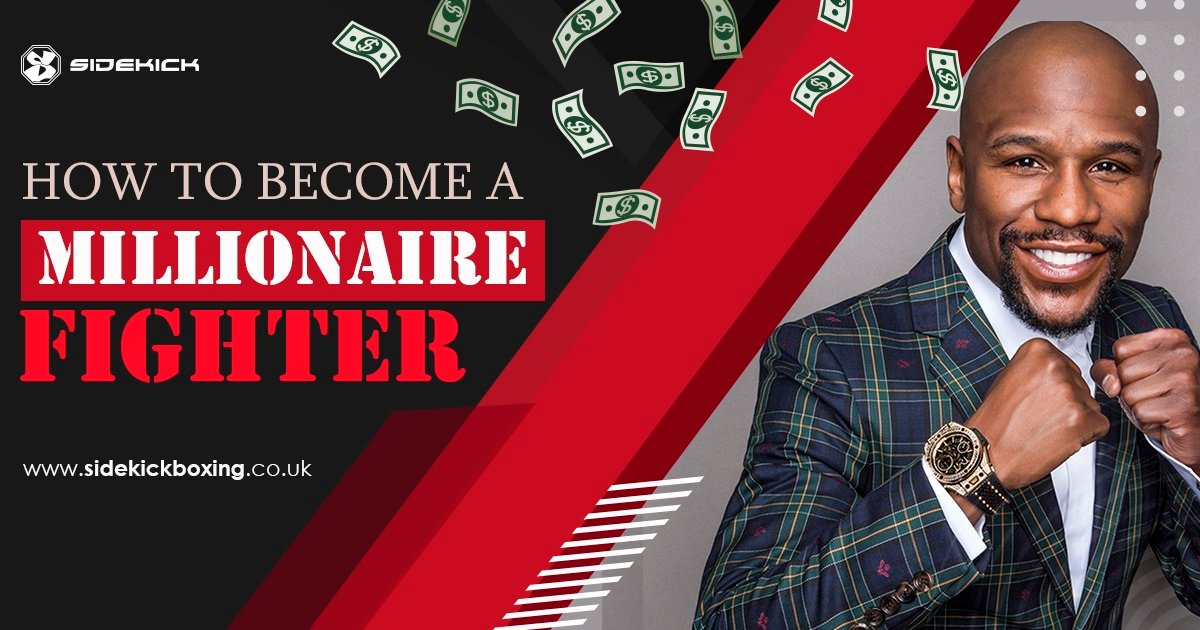 How To Become A Millionaire Fighter

Are you a fighter and want to know how to become a millionaire while winning all of the championship belts?

If so, this article is for you. To be a millionaire in any occupation is a magnificent achievement as it requires consistent dedication and determination, but can you be a millionaire from boxing?

Yes, plenty of fighters have proven you can get rich from not just boxing but in all combat sports. However, it is not an easy path because combat sports are exceptionally physically challenging, and the focus needs to be on training and competing rather than making money.

If you take the biggest names in combat sports, most didn’t always have an affluent lifestyle. They started with nothing, and their career hasn’t been an easy ride, as they have dedicated their lives to the fight game.

Fighters commit endless hours of training and not just for the money, but because they love the sport. Combat sports are one of the most challenging sports on earth, so if you want a career as a fighter, the most important thing is you need to be passionate about it, and you must eat, sleep and drink it. Otherwise, trying to make millions of pounds in a sport your heart is only half in, well, it could be a painful journey.

Every fighter has to work their way up from the bottom, and UFC star Conor McGregor is an excellent example of that as he didn’t get his success by luck; he had a clever plan the whole time.

McGregor was on the doll in his early MMA career, earning enough to get by before he signed to the world’s biggest MMA promotion. So, If you too are not yet making much money, don’t worry and keep focused as you will soon need a bigger money bag than Mayweather.

How do you become a millionaire from boxing?

In short, PPV’s. Pay-per views are the best way a fighter can generate millions of pounds. This is because they have the potential to sell millions of subscribers worldwide for just one fight, which they watch from the comfort of their own homes.

The fighter earns a percentage of commission to how many PPV’s are purchased, and as they sell millions of PPV’s they will get paid a substantially agreed purse too. In boxing, the biggest PPV was Mayweather vs Pacquiao, which made £333 million. In the UFC, a fighter has to be creative and think outside of the box quite literally to be a considerable PPV seller.

A fighter doesn’t need to be the best fighter ever; of course, they need to be good or even great, but if you take Anthony Joshua, he came from nothing and built his way up by fighting the right people at the right time. Joshua’s a very likeable character, and with a good bit of marketing, everyone got behind him and paid to watch him fight, and it wasn’t long before he became a superstar. To reach the level of like Joshua and make millions of pounds, It certainly won’t be easy as few and far between make it.

To put in perspective, to earn a million pounds, a fighter has an average career of 10 years, so they would need to earn £100,000 per year. However, selling PPV’s is not the only way to success as we will guide you step by step on how to make millions of pounds in combat sports, and by the end of this article, you should have the mindset to not only wanting to be a champion but earning a fortune too.

The MMA Guru suggests that:

You may already be doing many of the things we mention; however, it can be quite refreshing on the brain to read new content. You will need to think about where the money will come from and break it down.

Richest Boxers in the World

Following many of the tips detailed above, the boxers below are considered the top ten richest boxers of 2021. Keep reading, some of the boxers on this list will surprise you!

This boxer is a former professional boxer (although he is now the Mayor of Kiev and head of the Kiev City State Administration). He is worth $80 million dollars as of 2021.

Former professional boxer turned motivational speaker, Sugar Ray Leonard competed from 1977 to 1997  and won world titles in five weight divisions throughout his career. He is worth $120 million dollars.

Competing between 1989 to 2003, Lennox Lewis is a three-time world heavyweight champion and a two-time lineal champion and even represented Canada as an amateur at the 1988 Summer Olympics. In 2021, he is worth $140 million dollars.

A Filipino professional boxer and politician, Manny Pacquiao is worth $190 million dollars.

An American boxing promoter and former professional boxer, Oscar De La Hoya competed between 1992 to 2008. nicknamed “The Golden Boy”, he is worth $200 Million and won multiple world titles in six different weight classes.

Competing in two phases, the first between 1969 to 1977 and from 1987 to 1997, George Foreman s a two-time world heavyweight champion and an Olympic gold medalist worth $300 million dollars.

From boxing promoter to businessman and even a lawyer, Bob Arum is worth $300 million dollars.

An American ring announcer for boxing and professional wrestling matches, Michael Buffer trademarked the catchphrase “Let’s get ready to rumble!” and is worth $400 million dollars.

Anthony Joshua on Becoming a Millionaire

Although he wasn’t featured on our list above, Anthony Joshua is also one of the richest boxers in the world. In an interview with Business Insider, he suggested that:

‘there are ordinary people who are worth millions just because of property prices. So [now] I need to be a billionaire. Being a millionaire is good, but you have to set your sights higher.’

Joshua is planning to do this by targeting £100 million paydays for every fight he has as well as creating boutique boxing gyms across the UK.

However, Anthony Joshua also has lucrative commercial contracts with Lucozade, Under Armour, Beats by Dre, and Sky Sports.

As a fighter, most of the money you will earn will come from the fight shows and promoters. So, for a promoter to pay a fighter millions of pounds, it will have to be one hell of a fighter or Pay-per-view seller. A fighter will need to build their fight profile organically and work their way up the ranks. A fighter would need to get signed by the biggest promotions who pay the highest purses and gain the largest audience.

For kickboxing, it’s Glory kickboxing, MMA is UFC, and boxing has promoters like Matchroom Boxing. Until a fighter reaches this level, it is still a great idea while fighting on the smaller promotions to keep pushing ticket sales to friends and family. This will work well in a fighter’s favour as not only will they earn more money from the commission of the tickets, but it will make them more sellable to other promoters.

‘A fighter can generally have as many sponsors or endorsements as they like as long as none are conflicting. For instance, a fighter cannot promote two different brands of boxing gloves. However, it is better to have only a selected few of sponsors who are willing to pay more, rather than loads of small paying or non relevant companies, this will prevent the credibility of each not to be diluted. This is why it is also important for a fighter to look for the right companies which they can target their correct market, then it is likely to work for both parties for a long term relationship.’

For more information, check out our blog post ‘Grow an audience: How to make money as a fighter’

What do you think are the best ways to make money from boxing? Pop your comments on our Facebook post here!