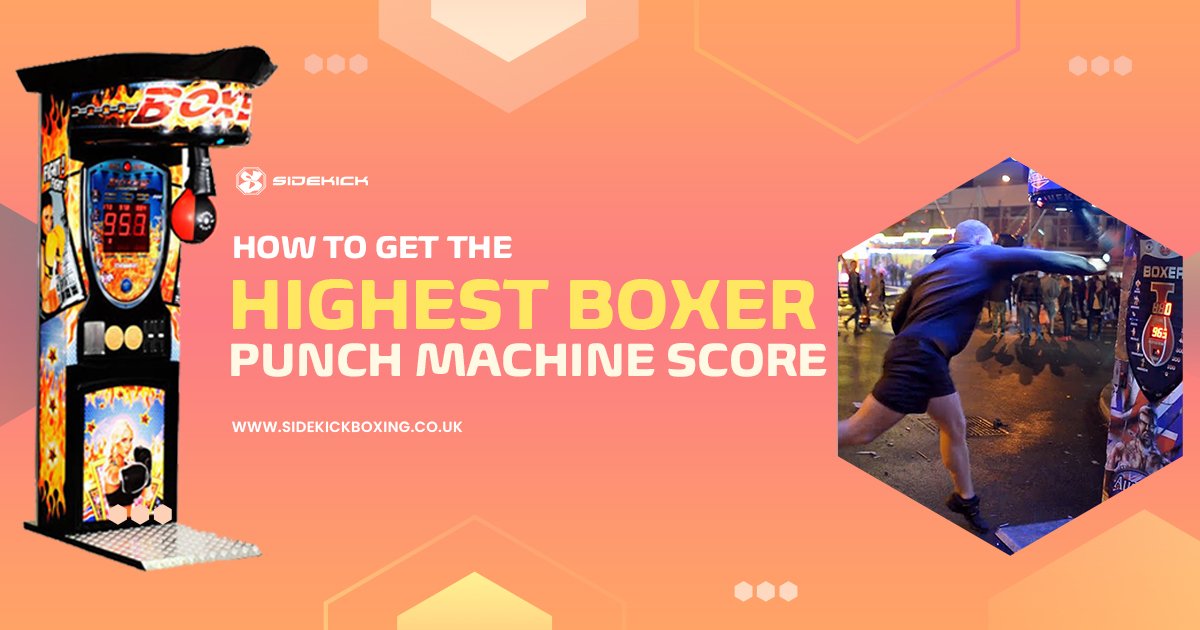 How to Get the Highest Boxer Punch Machine Score

It is a fight promoter’s genius marketing ploy, planting a punch machine in the venue full of half-cut ego fuelled boxing fans. When watching live fights, it is the perfect time for everyone to prove to their mates they have the biggest punch and get as close to 1000 points as they possibly can.

Yet, nervous of failing, they use the strategy of charging at it with a crazy swinging punch. But do they prove one punching power, or is it just for some harmless fun?

What is a Boxer Punch Machine?

The Boxer punch machine is a coin-operated punching bag style boxing game with modern gaming electronics. It produces both fun and excellent profits in various locations, including bars, nightclubs, etc., and is also suitable for home arcade and office use.

The boxer-puncher machines are so popular they have even been used by some of the biggest names in boxing, including Anthony Joshua, Deontay Wilder, and even Eddie Hearn has even had a go.

The puncher has to punch the bag as hard as possible to play the game. When the bag is hit, it is pushed back up into its tucked-away position, and the force of the punch that pushed it there is registered and shown as a score on the screen.

Everyone who uses the Boxer puncher seems to throw all the boxing skills they’ve ever been taught out the window.

Although punching machines are reasonably exact, there are some variances in accuracy among different manufacturers. You can’t compare your score to a friend’s unless they both came from the same machine.

Though you play against your friends, even if you are the better player, they may obtain a greater score than you. I’m not sure how that’s even possible. You might start to suspect that the machines are rigged.

Various punching machines have different calibrations, even though they are not manipulated. If you hit two devices with the same force, the results will most likely be completely different.

How to Hit a Boxer Punch Machine

You may have seen a boxer receive the highest possible mark because they practise proper punching technique. They combine their strength and technique to achieve the maximum possible score.

That is why you should always go for the appropriate technique rather than striking it forcefully and obtaining a poor score.

To punch the Boxer puncher for the best score, you may need to hit it differently from how you are taught in boxing. This is because it measures the force of the magnetic arm going back rather than the force at the target area on a boxing pad.

If you can imagine it when you throw a straight punch at the pads in boxing, you want to connect the punch precisely at the right time; you hear a snap, and you’re not trying to charge through it.

Many stand to one side and punch, which is a mix between a hook and a straight punch, like an overhand right.

If you hit the bag in this manner, you will put more force into it when you hit it, resulting in a greater score. This better score could mean the difference between beating or losing to your pals.

The foundation of throwing a solid punch has the proper posture. To maximise the power of a punch, your body must be in a position that flows naturally with the blow’s movement.

Push off your back foot heel, move your body weight to your front foot, and twist your hips, thighs, and stomach muscles. If you twist the muscles to the side before releasing the punch, you can boost the blow’s strength. You should practise this activity until it becomes smooth and natural to you.

Make sure your arms, shoulders, and hands are loose to obtain extra speed behind the punch.

At the last instant, before striking, close your fingers to make a fist, then tighten your fingers into the palm of your hand on impact. This allows you to move your hands more quickly than if you were throwing closed fists. Because the punching bag game awards points based on speed and power, you’ll be able to throw punches faster and earn better scores.

The punching bag game in bars must be forced onto the sensor at the top of the machine, unlike electronic punching bags at gyms, which score for strikes to different portions of the bag.

As a result, even if they might cause substantial injury to a human, big haymakers, hooks, or uppercuts are unlikely to score well.

You can obtain higher scores by striking the bag directly in the front and continuing straight through as if aiming to punch through it.

Running and punching should generate the most force.

This will have the same principle as a cricket bowler. The only issue with running is making sure you throw the punch precisely at the correct time.

What is the Strongest Punch Ever Recorded on a Boxer Punch Machine?

The most powerful punch ever recorded was 129,161 units! This strength equals 13 adult male karate blackbelt punches or 26 untrained adult punches.