Home>Kickboxing and MMA news and equipment>Is Alcohol Bad For Fighters? 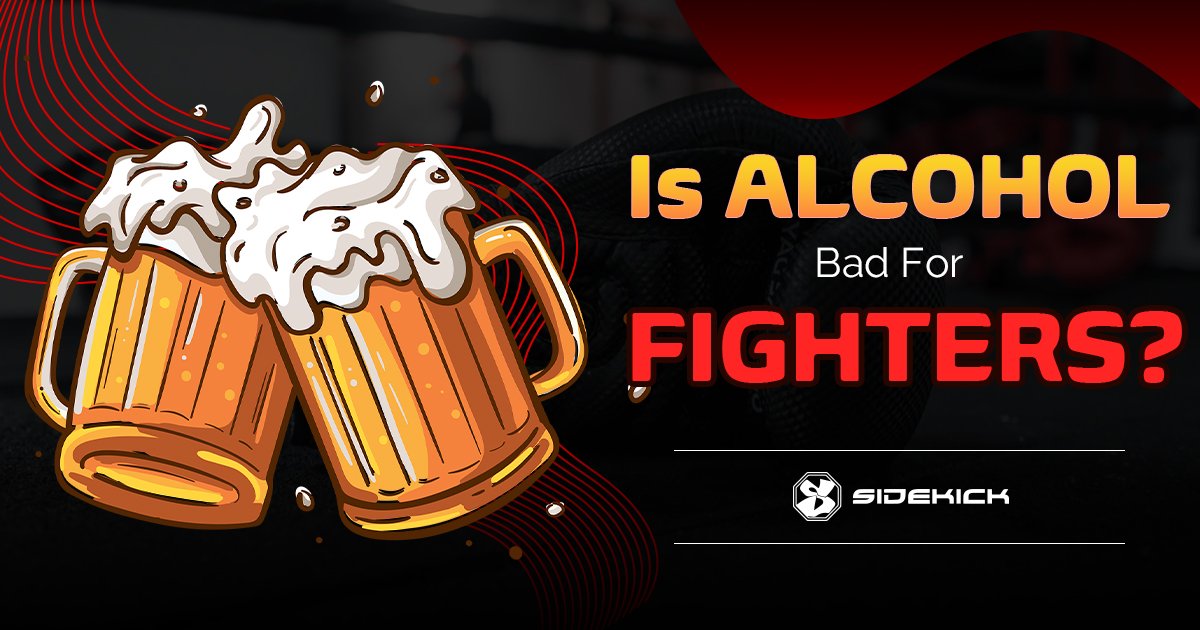 Is Alcohol Bad For Fighters?

We hear of many fighters when they are in fight camp that they don’t touch a drop of booze, but is really having a few beers going to affect a fighters performance or can they just shrug off a hangover?

Most of us enjoy a few beers at a BBQ or unwind with a glass of wine, but it goes with anything in life, it is all about in moderation.

By having a few beers in an evening, it shouldn’t really affect a fighter who has a fight coming up. It also might not be much of an issue with amateur and novice fighters who might only train 3-4 times a week and generally live a normal lifestyle and have full time jobs.

If they are only in their 20’s, age should really be on their side and the odd heavy weekend shouldn’t get in the way of their training regime.

However, a professional fighters lifestyle is quite different to amateur fighters, as it is now a full time career, so regularly drinking alcohol could prevent a fighter from working their way up the ranks. Additionally,  at the elite level of professional fighters, it is about getting both the physical and mental edge over your opponent.

Also, the top elite fighters and champions of combat sports set a level to the physical fitness and performance and boozy weekends will not compete to obtain this level.

The level in sports through sports science is always evolving with new training methods and dietary supplements and some fighters even try to get away with using banned performing enhancing substances to excel.

Check out this video below on the effects of alcohol & fitness:

Can Alcohol Affect a Fighter’s Performance?

Like anything, we are always looking at ways to improve and cutting out alcohol is definitely one of them. As crazy as it sounds, even if you look at darts, the professional level has dramatically changed over the years as they even used to drink beer on the pro events.

However, drinking during a televised game has been banned on stage since 1989.

In combat sports, a fighter must give 100% commitment going into a fight because it is a dangerous sport which must be taken seriously.

Also with many fighters, they all have that one performance when they believe they could have fought better and this disappointment seems to stick with them.

So, how many alcohol units should a fighter have per week?

It is recommended from health officials for both men and women not to exceed more than 14 units per week. That is equivalent to 5-7 pints of beer, depending on the strength.

So, even for a normal lifestyle it is recommended to be controlled. However, sinking 7 pints in an evening and expecting to go training in the morning is going to come as quite a shock, as you will be nowhere near 100% of your normal self.

Recently we saw WBC heavyweight champion Tyson Fury claiming he was drinking 12 pints a day while he was preparing to fight Anthony Joshua.

He wouldn’t be of course, but Fury would say things like this to tease Joshua to make it seem he doesn’t need to take his training seriously.

‘while alcohol may not be the direct cause of a person’s aggressive or violent behaviour, it is often a compounding factor. It has been found that binge drinking increases the likelihood of both becoming aggressive or angry and also being on the receiving end of someone else’s temper.’

Check out this video ‘Should Boxers Drink Alcohol? | Alcohol vs. Boxing Performance’ for more information.

So, what effect does alcohol really have on a fighter?

To be a fighter, as mentioned above it is about both physically and mentally to prepare for a fight and a strict and dedicated lifestyle is what is needed.

Let’s be honest, there is no point in training a fighter everyday, eating healthy to just be drinking alcohol, it is counter productive. The effects of alcohol are almost instant after consumption.

If you were to go for a run after drinking alcohol, you will rapidly get exhausted, but this of course is never recommended.

However, it’s not just about the negative effects of alcohol which it has on our body why fighters don’t drink, but also they need to watch their calorie intake to make sure they make weight as drinking too much alcohol will encourage them to put on the pounds.

It is thought that drinking alcohol will slow down your metabolism, but in fact it actually speeds it up. So the thought of losing weight with alcohol can be quite contradictory as research suggests that during alcohol consumption, your body absorbs it into your bloodstream.

Alcohol is known to have empty calories, which means they hold no nutritional value. However, you still get the energy and your body tries to get rid of these chemicals and uses this energy first before food.

Simply put, alcohol is your body’s first metabolism priority and it burns this energy instead of calories you get from food. As a result, your body may store excess glucose from carbohydrates and from fats as excess body fat.

Alcohol will really affect a fighters training because when someone drinks alcohol, the oxygen content in the bloodstream becomes depleted or desaturated.

This oxygen desaturation effect caused by alcohol, impedes adequate oxygen from being delivered, essentially suffocating the tissues and organs in the body.

In sparring training, your opponent is trying to hit you with fast punches and combinations, so you need to have cat-like reflexes to avoid getting hit.

Drinking alcohol will cause slower reaction times. That’s because, for up to 24 hours after drinking, alcohol continues to affect the brain’s ability to process information quickly.

‘In this study, alcohol consumption showed significantly slower time in cognitive tests and demonstrated significant detrimental effects in reaction time. In short, alcohol affects the way your brain works and interferes with its communication pathways. These disruptions explain why you’re more likely to break out in anger under the influence and make it more difficult for you to think clearly and move with coordination.’

Alcohol will affect a fighters overall level of performance and concentration as it affects many aspects of a lifestyle which can be a toll on a fighter. Poor sleep, dehydration, cramps, muscle pulls and generally feeling lethargic are all the effects of drinking.

‘But, it’s not only your muscle recovery that will be affected by drinking too much. Drinking alcohol can reduce your force and strength; both of which are essential parts of boxing.’

Getting a good night’s sleep is an essential part of a fighter’s lifestyle for recovery. The muscles need repairing and this only happens while we sleep and alcohol affects the quality of our sleep and can give us a broken night.

After drinking alcohol, production of adenosine (a sleep-inducing chemical in the brain) is increased, allowing for a fast onset of sleep. But it subsides as quickly as it came, making you more likely to wake up before you’re truly rested which stops a deep sleep. This can leave you feeling really tired the next day.

Alcohol is a diuretic, which means drinking alcohol will make you more dehydrated. When you’re dehydrated, your muscles are unable to function as they should and will be slower to recover after training.

Is Alcohol a Stimulant?

As you can see, having a few too many bevvies will cause you to have less sleep and longer recovery time which will definitely show in training.

Is Alcohol a Depressant?

Alcohol is classified as a Central Nervous System depressant, meaning that it slows down brain functioning and neural activity.

Alcohol does this by enhancing the effects of the neurotransmitter GABA. This will cause you to feel more anxious and stressed.

A fighter’s mindset To be a fighter you need to be full of energy, alert and strong. A fighter feeling hungover, lethargic and tired will really affect a fighter and give a negative attitude.

What are the other side effects of alcohol?

Nausea, headaches, fatigue, tiredness. All of these additional side effects are obviously not the best to add to a fighter’s rigorous physical routine on a daily basis.

It is important our alcohol intake is kept controlled and anyone looking to be a fighter should really consider cutting it out, at least as much as possible.

If your drinking is becoming a concern please seek professional advice below: