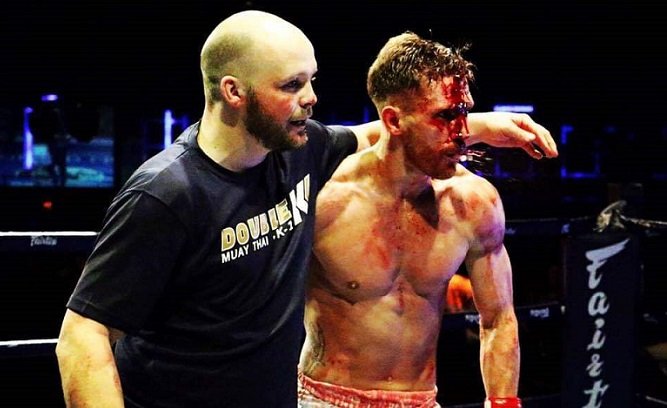 If you’re a fight fan, when you hear the word Keddle, you instantly think of world class Muay Thai fighters.

Well, that’s exactly what Kieran Keddle is. Kieran is a former multiple world Muay Thai champion and has also trained many champions himself.

Keddle has even trained celebrities such as Idris Elba who won his professional kickboxing debut at York Hall. There has been a documentary made about this training journey called ‘Idris Elba: Fighter – Developing a kickboxer’.

Kieran is a fighter, owner of Double K Gym and promoter for MTK so it’s easy to see why he is one of the biggest names in Muay Thai.

Kieran Keddle was fighting back in 1999 as a very young fighter, but his career in Muay Thai was only just beginning.

We have asked Kieran to answer some questions about his career in Muay Thai below:

Dan: ‘How did you get into Muay Thai?’

Kieran: ‘I started in 1992 , under Sean Toomey at Lumpini Gym. He used to teach at a local place called the Orpington Leisure Centre. It was just a small gym hall. My brother, Alan, was training in Manchester at the time and said I should go try it.’

Dan: ‘How many fights have you had and what is your record?’

Dan: ‘What did you love most about fighting?’

Kieran: ‘You know, it’s a good question. It’s cliche to say that thrill of having your name announced as the winner.

All the hard work paid off is something that can’t be explained unless you’ve experienced it; however , the experiences that fighting has brought me is what I love most about it.

Meeting some extraordinary people, new places and stories that I’ll share one day with the grandkids.’

Dan: ‘How does living in Canada compare to the UK?’

Kieran: ‘Well I do love Canada. It’s certainly a different way and pace of life. Not to say it hasn’t been challenging, but I’ve always been one for a “mountain” of a challenge.

The way of life is very laid back compared to the U.K., the people are also very easy going yet are always willing to help me out.

The support I had for my promotion to the Muay Thai World Cup last year is an example. Everyone supported me, no questions asked.

I do miss my friends and family , but over the last two years (forgetting Covid) I’ve had quite a few people come out. They all love it here, in fact many want to live here themselves.’

Dan: ‘What is your best achievement in your career as a Muay Thai?’

Kieran: ‘Ohh that’s a hard one. In fighting it was competing at the old Lumpini stadium in Bangkok.

Outside of competing and into coaching it would be Charlie Peters becoming U.K. no.1 by beating Liam Harrison.

Dan: ‘Is there anyone you would like to thank?’

Kieran: ‘I’d like to thank anyone who’s ever helped me throughout my career. This isn’t a solo trip, anyone and everyone has needed help along the way.

To Francois and his wife Betty, thank you for opening the doors at Elite Martial arts (Calgary) and welcoming me to the community.’

Dan: Thank you for your time Kieran, you are a credit to Muay Thai!

If you would like to read our article which Kieran Keddle has shared his views about ‘Thaiboxing vs MMA: Which has the more elite fighters?’ click here.