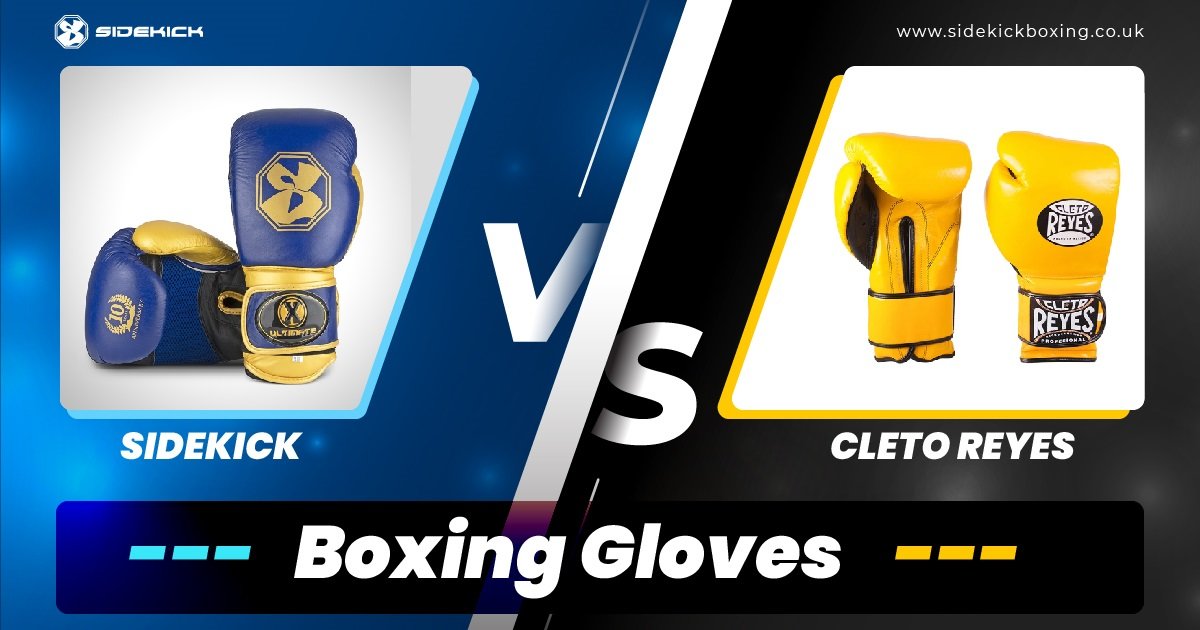 Anyone looking to purchase a new pair of boxing gloves likes to compare prices with various brands. Generally, every customer has a budget in mind and wants the best possible boxing gloves for their money.

We have put our Ultimate X boxing gloves head-to-head against the infamous Cleto Reyes. Sidekick has been a British brand in combat sports equipment for the last decade, and Cleto Reyes is a Mexican traditional boxing brand that comes with a huge price tag.

So, how do they fare?

The History of Cleto Reyes

Cleto Reyes Castro was the original creator of the Cleto Reyes brand. Cleto, born in Mexico City in 1920, didn’t have the best of life. When he was just 12 years old, he was forced to begin working.

He dropped out of school to sew baseball gloves in a store. Cleto slept in the leather shop where he worked because he was homeless due to family problems. He would start honing his artistic talent right here, in the workshop that he also called home. Cleto would hone his stitching techniques after the workshop closed for the day, learning, trying, and experimenting with sewing leather.

When Cleto was 16 years old, his love for boxing officially began. He was enticed to a neighbouring boxing venue where he watched Joe Conde, Rodolfo Casanova, and Juan Zurita square off against one another.

He replied to a newspaper advertisement encouraging young people to participate in a boxing match in 1938. It was Cleto’s first and last time-fighting in the ring.

This incident significantly changed Cleto Reyes’ life and career. Despite the crowd’s encouragement, he decided not to engage in another brawl. Instead, he started his profession with boxing gloves, repairing the ones he had worn during the fight using his skills in the leather factory.

Cleto repaired his gloves and advanced once more. He decided he wanted to construct a fresh and superior set of gloves he had worn during his battle. He worked on his own Cleto Reyes boxing gloves for many years, testing, adjusting, and improving them.

The Cleto Reyes gloves were utilised for the first time in a world title match after receiving permission from the local boxing commission.

Cleto started his workshop and began selling his boxing gloves to Mexican fighters during the early 1950s. Then, when they flew to America for fights, their trainers would promote Cleto Reyes’s boxing gloves by selling pairs of them.

The brand didn’t officially begin to be supplied throughout the United States until 1965, leading to expansion outside Mexico.

Check out a review for Celto Reyes here:

The History of Sidekick Boxing

Daniel Knight, the proprietor of Sidekick Boxing, and his father Jim operated MuayUK, a distributorship of Twins Special and Top King Muay Thai gear, back in 2010.

It didn’t take them long to realise that there was such a high demand for these goods, particularly the Muay Thai gloves, that it was challenging to deliver the supply quickly enough.

Daniel, who spent nearly 10 years training in full contact kickboxing in Brighton, concluded that building your brand would be more beneficial in the long run because it would give you more control over the organisation.

Jim, who owned several companies in Haywards Heath, such as neighbourhood cafés, pubs, and seafood markets, chose against investing in the activity, leaving it entirely up to Daniel.

Daniel, who had previously worn out several boxing gloves during his kickboxing training, was able to test the products personally after having samples of the upcoming equipment prepared.

It was pretty thrilling to get a professional picture shoot of all the equipment as soon as the things arrived and publish the inventory online.

In a short period, Sidekick became one of the most well-known brands in the United Kingdom as it nearly instantly began to sell.

To know more about the Knight family from Brighton read an article here.

You can also check out our full range of boxing gloves here: https://sidekickboxing.co.uk/product-category/boxing-gloves/

Don’t take our word for it, Muay Thai practitioner Kyle Greaves has been using his Sidekick Ultimate X boxing gloves for 3 years and this is what he had to say about them: