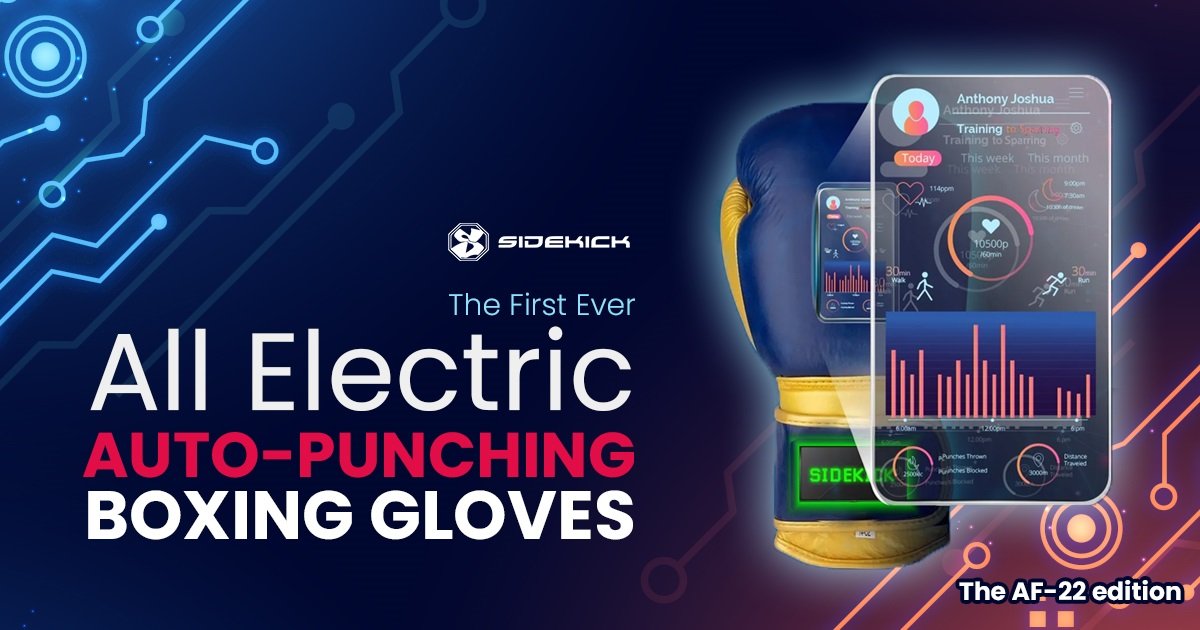 The First Ever All Electric Auto-Punching Boxing Gloves

We are now in such a digital world that almost everything is becoming self-operated. Alexa is voice activated which can turn things on and off around the house, and even cars now are becoming self-driving.

imagine if this advanced technology entered the world of boxing which produced boxing gloves that are auto-punching, that you literally don’t need to do a thing yourself. Their so good, that the gloves literally punch and block for you.

Well, we have just developed a revolutionary new product which are the first ever electric auto-punching boxing gloves, the AF-22. These battery operated gloves are so good, no-one will land a punch on you.

So, What are Auto-punching boxing gloves?

The AF-22 electric boxing gloves are manufactured in a traditional leather structure, yet incorporated with state-of-the-art digital technology we have today.

The AF-22 are powered by a charagable lithium ion (Li-ion) battery and installed with hand mold motors which operate the punches. The AF-22 are also fitted with advanced blocking technology (ABS) using motion sensors.

The sensors in the electric boxing gloves detect any movement to block or parry any punches so you avoid getting hit. The AF-22 are also Installed with face and hand recognition cameras to scan your opponent which allows the user to box against anyone.

How do the electric gloves work?

The digital screen on the face of the gloves allow you to choose one of the three settings to suit your opponent. A light spar, heavy spar, or fight mode, which delivers the most powerful blows for a knockout. Once you have picked your setting the AF-22 gloves will scan your opponent using the cameras and sensors to perform a flawless box.

How many punches per round

The average punches per round in boxing is around 50 across all weight classes, so you can expect a boxer to throw around 600 punches in a 12 round contest. However, Jesus Soto Karass set a crazy record by throwing an amazing 1848 total punches in his 10 round fight against Necco Macias. The AF-22 boxing gloves produce an average of 100 punches per round, so you will easily outwork most people.

The AF-22 has built in digital cameras which captures all your training and with the 8GB of ram in has enough storage to save your progress throughout the year.

Furthermore, with the linked social media apps you can show off to your friends and share your videos online. The boxing gloves can even answer incoming calls when purchased along with the AF earpiece. That is showboating at it’s greatest!

Where to buy the electric boxing gloves?

These gloves have been specially released on the 1st April. The AF-22 electric boxing gloves retail at £1499.99. However, we are offering an introductory discount of just £104. To purchase the boxing gloves click here.

The AF-22 electric auto-punching boxing gloves are the revolutionary design of boxing gloves that will make you incredibly good. As they are designed to look like ordinary boxing gloves, no one will cotton on how you have become so good.

We are currently working on the AF-22 boxing boots to deliver the perfect footwork. We are expecting the release date to be the 1st April 2023.