Home>Kickboxing and MMA news and equipment>The Rematch Clause: Is It Bad For Boxing? 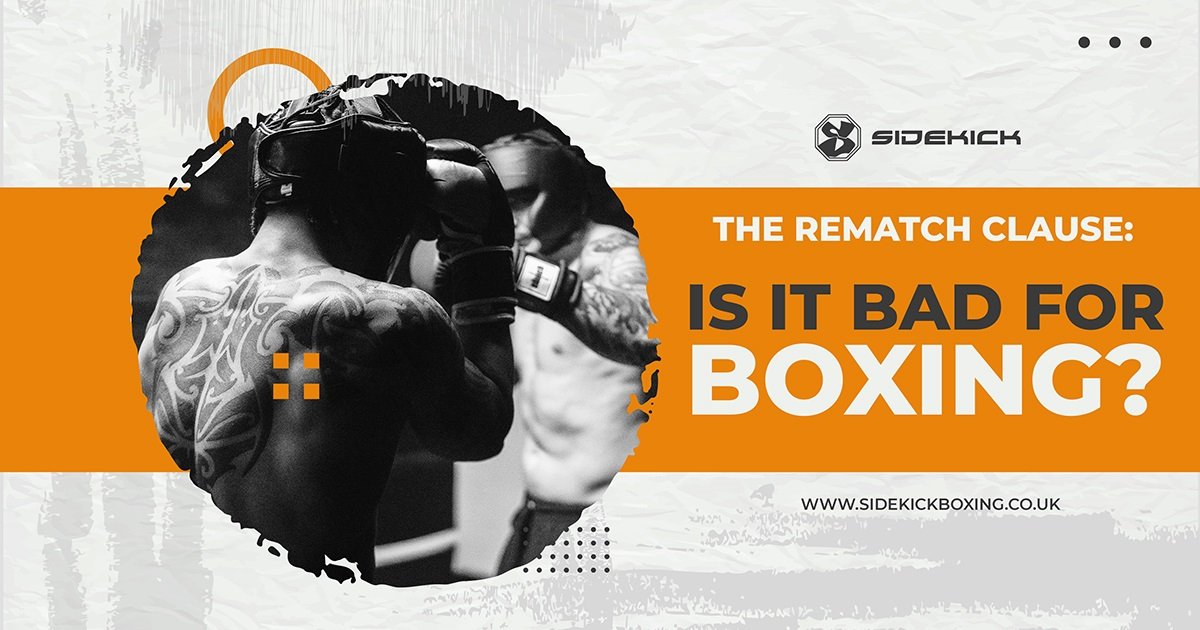 The Rematch Clause: Is It Bad For Boxing?

In boxing, their are certain thing’s that regularly crops up and seem to always disappoint the fight fans, and one of those is the dreaded ‘rematch clause’.

So, what is the rematch clause and why is it bad?

The rematch clause is when a boxing champion fights against a challenger who isn’t a mandatory or in-line to fight and they put a contract in place to protect their championship titles, so that if they lose the fight, the new champion will have to honour a rematch. However, it doesn’t usually abide with the challenger so they cannot have a rematch if they lose.

Why do boxers have a rematch clause?

A fighter’s management put these rematch clause contracts in place so if their fighter loses, they will get the opportunity to fight for their boxing titles back, rather than the new champion fighting new oppenents and not being able to get another opportunity for a title shot again.

The rematches in boxing generally do cause much disappointment for both the fighters and the fans because at the top of boxing, they don’t get to fight very often and it only causes other fighters to wait longer for an opportunity for a title shot or worse still, not at all.

If you take Anthony Joshua, he has been a world champion for 5 years and has had only 10 fights in that time. Joshua did lose his world title belts back in 2019 when he fought Andy Ruiz, but he was able to reclaim the titles back, as there was a rematch clause in place and Joshua won the second fight in Saudi Arabia.

In an ideal world, unless there is a valid dispute of the winner, there shouldn’t be the need of a rematch. You wouldn’t expect to see in a football world cup final, the losing team requesting a rematch or the previous world cup winners having a rematch clause and the same should really apply with boxing.

Also, a rematch clause can be very disappointing for the fans as they may not want to see the same fight again, especially if it had a clear winner. A good example of this is the recent announcement of the trilogy fight between Tyson Fury vs Deontay Wilder.

The first fight was an epic fight which ended in a draw, but many believed Fury wasn’t awarded the rounds he won and should of taken the win. As it was a draw and Wilder was the current champion, he gets to walk away with the WBC belt and no rematch clause was needed to be activated. It was an edge-of-your-seat fight and it will certainly go down in history, especially the way Fury got up off the canvas in the last round.

As the fight was very close and people saw it had gone either way, there was a calling for a potential rematch and the fans were definitely keen to see how the next fight would pan out. Also, as Wilder believed he won the fight, he wanted to prove he could beat Fury in a rematch, so they made the second fight happen. Fury won the rematch as he knocked out Wilder in the 7th round to become the new WBC champion.

For many years, every boxing fan has wanted to see the undisputed heavyweight World championship, which is when all four major boxing belts are on the line in a fight and the last time we had an undisputed was in 1999 with Lennox Lewis. So, when we heard Tyson Fury was going to take on Anthony Joshua this August for the undisputed, every fight fan could not be happier.

However, just when Fury thought Wilder was been and done, Wilder took legal actions to activate the rematch clause which was in their initial 2nd fight contract. This threw a spanner in the works for the undisputed and a third fight between Fury and Wilder is now set for the 24th July, leaving the Fury Joshua fight in jepedy.

This third fight is not a fight people want to see and it is only delaying or even preventing an undisputed from happening. Now, as Joshua cannot wait to fight Fury, he is in talks to fight Uysk and Joshua’s manager Eddie Hearn has also insisted there will be a rematch clause in the contract.

Joshua fights on average only 2 times a year, which means a potentially undisputed fight or even an opportunity for a new challenger for a shot at the title could be unlikely to happen for at least another year. So, unfortunately for the boxing fans, we won’t get to see the all British undisputed mega fight anytime soon.

The solution to the rematch clause

In boxing, there is many boxing sanctioning organisations and not one governing body to control the sport of boxing. To learn more about the boxing organisations read our article ‘The different boxing title belts explained’ here.

Each boxing fight is generally organised between the fighters, managers and promoters and they also arrange the contracts themselves and negotiate their terms and conditions. They may also hand pick their opponents and add special requirements in to the contract including the percentage of the purse, location and the rematch clause. So, unlike other sports, it is controlled by the parties involves as opposed to a governing body.

If boxing was to only have one sanctioning and governing body it would improve the sport in many ways. This would mean there would only be one champion and challengers will get their shot at the title once they have built up their rank to earn a shot. Also, there would be no need for the organisation to have a rematch clause as each fighter would be signed to the same boxing organisation, similar to the UFC. If all fighters were signed to one organisation they would also fight more regularly too. However, for this to ever happen is quite unlikely.