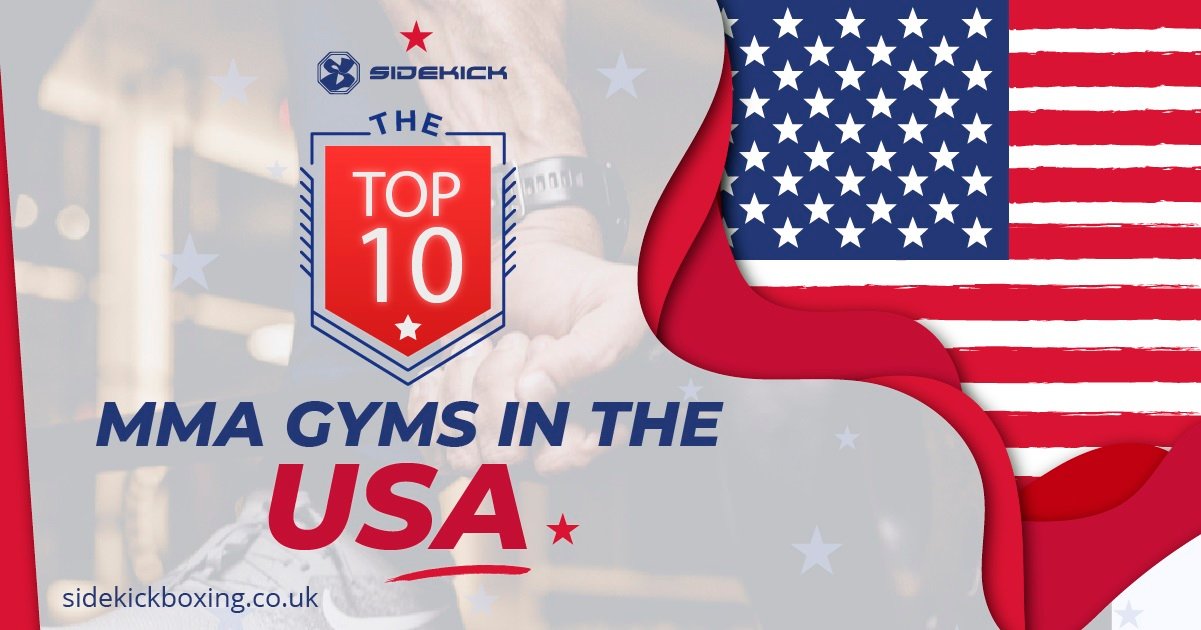 The Top 10 MMA Gyms In The USA

MMA is a global sport. Champions across all major organizations represent countries from literally all continents other than Antarctica. With that said, the majority of those champions choose to train in one country: the United States.

Simply put, the States are home to the sport’s mega-camps — world class facilities with world class coaches and rosters of world class fighters. Some of those gyms have been around since the early days of MMA, while others have only come on the scene in recent years.

What are those gyms? While there’s no shortage to choose from, these are the 10 best MMA gyms in the United States, in no particular order.

The sprawling home of American Top Team (ATT) in Coconut Creek, FL might be the largest single MMA facility in the country. From a full-size cage, to a massive strength and conditioning space, to seemingly endless square footage of mats, ATT offers everything that an MMA fighter of any level could possibly want.

More than just a spacious facility with some fancy equipment, ATT is one of the most respected and well established MMA gyms in the country. Founded by Dan Lambert in 2001, the gym was created with what was, at the time, a novel concept: provide a comprehensive training facility under one roof where MMA fighters could train all disciplines. Since then, that’s become the norm, but ATT was on the cutting edge of MMA training in 2001, and it remains one of the premier gyms today.

ATT’s coaching staff is made up of the finest minds in the sport, including head coach Marcus “Conan” Silveira, MMA coach and former WEC champion Mike Brown, former Olympic wrestler Steve Mocco, and many others. That coaching staff has produced countless elite MMA fighters and champions such as Amanda Nunes, Dustin Poirier, Jorge Masvidal, and Joanna Jedrzejczyk.

Originally an off-shoot of American Top Team, the south Florida MMA team originally known as the “Blackzilians” is now Sanford MMA. Although members of the team have come and gone since its inception, the core group of coaches remains the same, with retired Dutch kickboxer Henri Hooft leading the charge as the squad’s head striking coach, three-time national champion Greg Jones for wrestling, and UFC veteran as the team’s jiu-jitsu coach.

With Hooft at the helm, Sanford MMA excels at transforming elite wrestlers into some of MMA’s most dangerous strikers. Hooft and company guided current UFC champion Kamaru Usman to the title, and the gym is home to numerous elite wrestlers-turned-fighters, including Logan Storley and former Bellator MMA champions Michael Chandler and Darrion Caldwell.

More than just a nice facility filled with elite fighters, Sanford MMA (and the Blackzilians) has long been known for hard sparring and training sessions — dozens of the world’s best fighters going at it tooth and nail day in and day out.

Xtreme Couture in Las Vegas, NV, has been Sin City’s best MMA gym for years. Founded in 2007 by former multi-weight UFC champion Randy Couture, the facility houses two cages, two rooms filled with mats, and a full strength and conditioning area. On its busiest sparring days, the gym is packed with top fighters from around the world.

Lead by head coach Eric Nicksick, the gym is the current home to UFC heavyweight champion Francis Ngannou, former UFC champion Miesha Tate, and current UFC featherweight contender Dan Ige. And on any given day, visitors are likely to see dozens of elite MMA fighters at Xtreme Couture, whether they it’s their home gym or they are merely visiting while in Las Vegas.

Xtreme Couture is much more than a team of professional fighters; the gym also boasts an amateur MMA team and offers regular BJJ, kickboxing, and MMA classes to hobbyist martial artists or fighters looking to refine their skills.

Perhaps no other gym has seen as much sustained, enduring success at the highest levels of MMA than Jackson-Wink MMA Academy (formerly Jackson’s Submission Fighting) in Albuquerque, NM. Led by founders Greg Jackson as the head MMA coach and Mike Winkeljohn on striking, the team has produced numerous champions and continues to develop talent from the ground up.

Greg Jackson gained notoriety as an MMA coach just as his top student Diego Sanchez won the first season of The Ultimate Fighter in 2005. Other Jackson-trained fighters like Donald Cerrone, Carlos Condit, and Joe Stevenson would follow. With their success, more fighters would flock to Albuquerque to train with Jackson, including all-time great Georges St-Pierre and UFC champions Rashad Evans and Holly Holm. The gym is the current home to another pound-for-pound great, Jon Jones.

Today, the gym continues to pump out fighters at all levels, recently adding on-site dorms for fighters looking to literally live at the gym. What’s more, the gym offers a plethora of services ranging from physical therapy to sports psychology.

Phoenix, AZ’s MMA Lab has quietly been producing world class MMA fighters for nearly 15 years. Founded in 2007 by Royce Gracie black belt John Crouch, the MMA Lab’s fighters tend to be poised, tough, and technically sound in all areas of MMA. Crouch’s background in BJJ shines through, as his charges rarely make mistakes of any sort on the ground.

The MMA Lab’s most successful product has been, without question, former UFC champion Benson Henderson. Henderson won the UFC lightweight title in 2012 and would successfully defend the belt three times before losing it to Anthony Pettis in 2013. Today, the MMA Lab is home for top UFC contenders Jared Cannonier, Casey Kenney, and Kyler Phillips.

Beyond producing top-tier fighters, the MMA Lab offers classes to hobbyists, as well, including classes in BJJ and kickboxing.

Since 2006, retired kickboxing champion Duke Roufus has been building an MMA empire in Milwaukee, WI. Year in and year out, Roufusport consistently turns out elite fighters across multiple top-tier organizations. Roufusport-trained fighters tend to be exciting, finish-oriented fighters that are just as comfortable on the feet as they are on the mat.

No other fighter embodies the Roufusport style better than former UFC champion Anthony “Showtime” Pettis. One of the sport’s most entertaining fighters, Pettis is now a part owner of Roufusport. Under the tutelage of Roufus, the gym has produced world-class fighters like Sergio Pettis, former UFC champion Tyron Woodley, and current top Bellator contender Raufeon Stots.

With head coach Sayif Saud at the helm, Fortis MMA has burst onto the scene in recent years, producing an incredible number of high-level fighters. Each one of those fighters regularly sing the praises of Saud and the atmosphere he’s created at Fortis.

While Saud might be one of MMA’s lesser-known coaches, his fighters are making waves at an elite level. From veteran fighters like Uriah Hall and Carlos Diego Ferreira to dangerous up-and-comers like Geoff Neal and Ryan Spann, seemingly every UFC card lately has been loaded with Fortis MMA products, each of them well-rounded and aggressive. Making that roster of fighters more impressive is the fact that Fortis MMA was founded in 2017; the gym’s rapid success is a credit to Saud, who is quickly becoming known as one of the best minds in the sport.

Founded by former professional kickboxer Javier Mendez, American Kickboxing Academy has been a premier MMA gym since the very beginnings of the sport. Mendez, along with “Crazy” Bob Cook can be seen at early UFC events cornering fighters like Frank Shamrock.

Nowadays, don’t let the name fool you: American Kickboxing Academy in San Jose, CA is the home to some of the best wrestlers and grapplers in MMA. Led by the successes of former UFC heavyweight champion Cain Velasquez, AKA-trained fighters have been using a pressure-oriented, wrestling-heavy attack to reach the highest levels of the sport. After Velasquez, AKA-trained fighters continued to use this approach; Daniel Cormier became a two-weight UFC champion, and Khabib Nurmagomedov grappled his way to the UFC lightweight title and a perfect record.

Although Velasquez, Cormier, and Nurmagomedov have retired from competition, their impact continues to be seen, as AKA’s Islam Makhachev seems poised to carry the baton as the team’s next wrestling-happy champion.

Team Alpha Male was America’s first MMA camp centered around smaller fighters. At a time when lighter weight classes weren’t being showcased in the UFC, former WEC featherweight champion Urijah Faber founded Team Alpha Male in his hometown of Sacramento, buying up a block of houses for fighters to stay at while training.

As the lighter weights were integrated into the UFC and gained more prominence, so too did Team Alpha Male. Faber, along with top contender Joseph Benavidez and former UFC bantamweight champion TJ Dillashaw established themselves as a force over the past decade.

Carrying on the tradition of Faber, Team Alpha Male fighters tend to be excellent wrestlers with knockout power and a knack for finding the guillotine choke. And although Benavidez and Dillashaw have since moved on, Team Alpha Male remains an elite MMA camp with top fighters like Cody Garbrandt, Song Yadong, and (despite the team name) top female flyweight Maycee Barber.

Faber has upgraded the facilities since the early days of Team Alpha Male, moving into a sprawling new academy in Sacramento, complete with in-house strength and conditioning.

Kings MMA in Huntington Beach, CA gives a taste of old school Brazilian-style training in the United States. Founded by muay thai expert Rafael Cordeiro in 2010, Cordeiro keeps the legendary Chute Boxe style of training alive, with an emphasis on hard sparring and reliance on the idea that iron sharpens iron.

The gym offers typical BJJ and muay thai classes in addition to the team’s deep roster of top professional fighters in both MMA and kickboxing.