Home>Kickboxing and MMA news and equipment>Vegans vs Meat-Eaters: Fit or Fad? 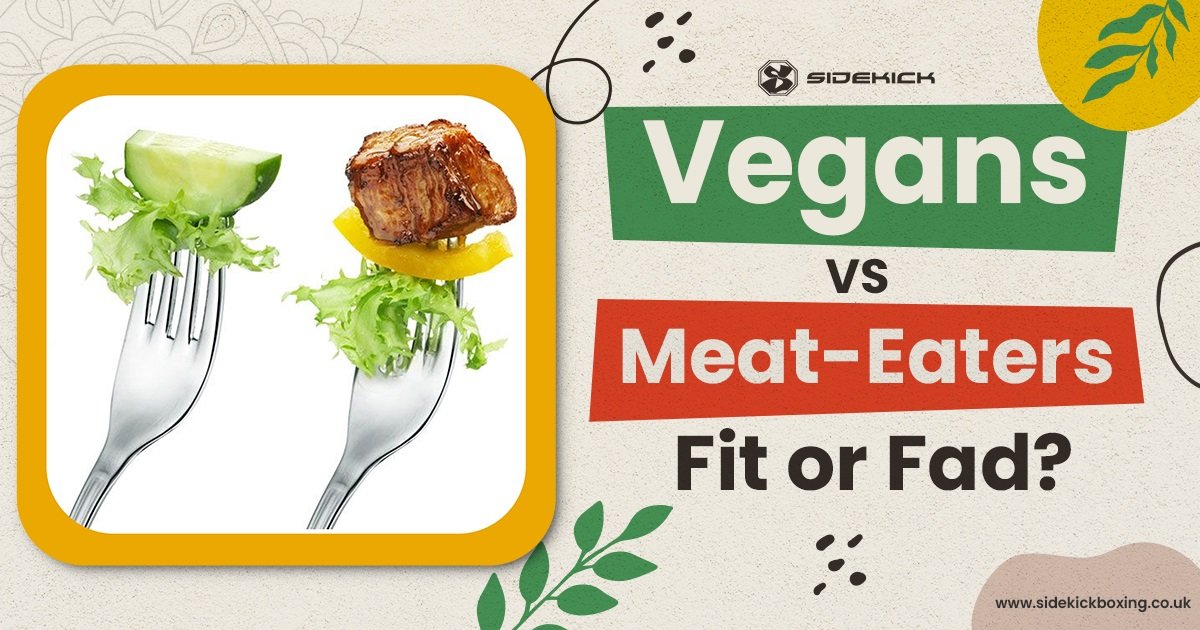 Vegans vs Meat-Eaters: Fit or Fad?

Nowadays, more and more people are choosing to be vegan and ditching eating meat. Each person has their reasons for becoming vegan, but it is generally because it is more humane for the animals.

However, the question is: Is the Vegan Diet Suitable for Fighters? Find out in this blog post!

What is a Vegan Diet?

A vegan diet usually consists of plant-based foods, as they cannot eat meat, poultry, fish, eggs and even dairy products as they also come from animals.

‘Vegans avoid all animal-derived foods – so as well as meat and fish, that means no eggs, dairy or honey. They also exclude animal byproducts like rennet used in cheese making, gelatine in desserts and certain E numbers including the red food dye cochineal (E120). Even certain vegetarian foods, such as some meat substitutes, are off the menu because they contain egg and sometimes dairy.’

What is the difference between a vegan and a vegetarian?

A vegan diet doesn’t eat all meat and animal products like meat, fish, seafood, dairy and eggs, whereas a vegetarian still doesn’t eat any meat or fish but still eats dairy products.

This means that vegetarians do not consume any living creature, but still consume the by-products of these animals.

For example, a vegetarian won’t eat:

However, vegetarians will eat:

There are other types of vegetarians too such as:

Check out this image below for more information about vegans vs vegetarians:

As discussed above, vegetarians can eat eggs, as they don’t eat any living animal, and an egg, unless it is fertilised, would not hatch into a chicken. However, a few variations of a vegetarian diet depend on whether you eat or exclude eggs, dairy, and fish.

There is much controversy about whether a plant-based diet would be as good as a meat diet due to a lack of quality protein. Protein is one of the essential nutrients for our body, especially for athletes, as a high protein diet is necessary for muscle growth and repair muscle tissue.

Also, one of the best selling protein supplements on the market is Whey protein as it is very high in protein and easily digestible, and products have around 82 grams of protein per 100 grams. As whey protein is derived from milk, which contains both whey and casein, it is not suitable for Vegans.

Check out this list of athletes below who are vegan below:

When asked about his switch to veganism, Nate Diaz suggested that:

“I think you’re a smarter and more intelligent fighter [when you go vegan]. Me and my brother are at the top of the game and have been for a long time. We’re obviously doing something right. Besides knowing how to kick somebody in the head, you should know how to feel good tomorrow”

However, many nutritional experts still suggest that a vegan-based diet offers just as much protein as a meat diet and is better for the health, but how true is that?

Check out the infographic below on the best practices for eating vegan for athletes below:

Is a Vegan Diet Better for your Health?

Years ago, plant-based foods were usually always considered quite bland compared to a meat option. However, today we have a much wider variety for vegans with plant-based foods to choose from, and It was only recently McDonald’s announced the new Mcplant burger soon to be released as a trial for its first-ever plant-based burger. So now, vegan meals can make just as delicious meals as meat dishes, but does it still provide all the nutritional benefits?

For fighters, a meat-eater would be able to have a more nutritional diet, assuming they have a varied balanced diet, as they can benefit from eating meat and everything a vegan eats. Still, a vegan, of course, is limited to what they can eat. Lentils, beans, chickpeas and nuts are the common ingredients to make up a vegan meal.

How to Eat Healthy as a Vegan

The NHS website suggests that there are six different ways to eat healthy as a vegan:

If you choose to include foods and drinks that are high in fat, salt or sugar, have them less often and in small amounts.’

McDonald’s suggested that The McPlant delivers the same great taste and experience you would expect from a McDonald’s burger whilst enabling customers to choose a plant-based menu option.

McDonald’s UK&I has spent three years on research and development to bring a delicious plant-based offering to British and Irish customers. Every element of the McPlant was designed with taste and quality top-of-mind – from the plant-based patty co-developed with Beyond Meat® to innovative vegan cheese based on pea protein that tastes just like McDonald’s iconic cheese slices, and a new vegan sauce.

In his hey-day, Mike Tyson was eating 4,000 calories per day when training for a fight. This was supplemented with vitamins taken in the morning.

However, Mike Tyson went vegan for a while and he even suggested that:

“Becoming a vegan gave me another opportunity to live a healthy life,” he continued. “I was so congested from all the drugs and bad cocaine, I could hardly breathe. High blood pressure, almost dying, arthritis, and once I became a vegan all that stuff diminished.”

“I lost weight. I dropped over 100lbs and I just felt like changing my life, doing something different and I became a vegan,” added Tyson.

His massive weight loss is shown in the image below. However, losing weight doesn’t necessarily mean you’re fitter and it certainly doesn’t mean that you’re a better fighter either.

Recently, Tyson has rescinded his vegan diet as suggested in his appearance in the Joe Rogan Experience. He told Rogan: “I stopped because of the training and because of what I wanted my body to look like and the strength that I wanted to possess.

“I only eat elk and bison — wild stuff — and I’m starting to feel fit.”

Check out this video below for Tyson’s full confession about going back to eating meat:

Although it hasn’t been formally announced, he suggested in September that he might be fighting against Lennox Lewis although Vitor Belfort, and Anderson Silva stand out too.

So, what do you think? Can you be vegan and be a great fighter? Give your opinions on our Facebook post here!