Home>Kickboxing and MMA news and equipment>What will be the Most Popular Combat Sport of 2022? 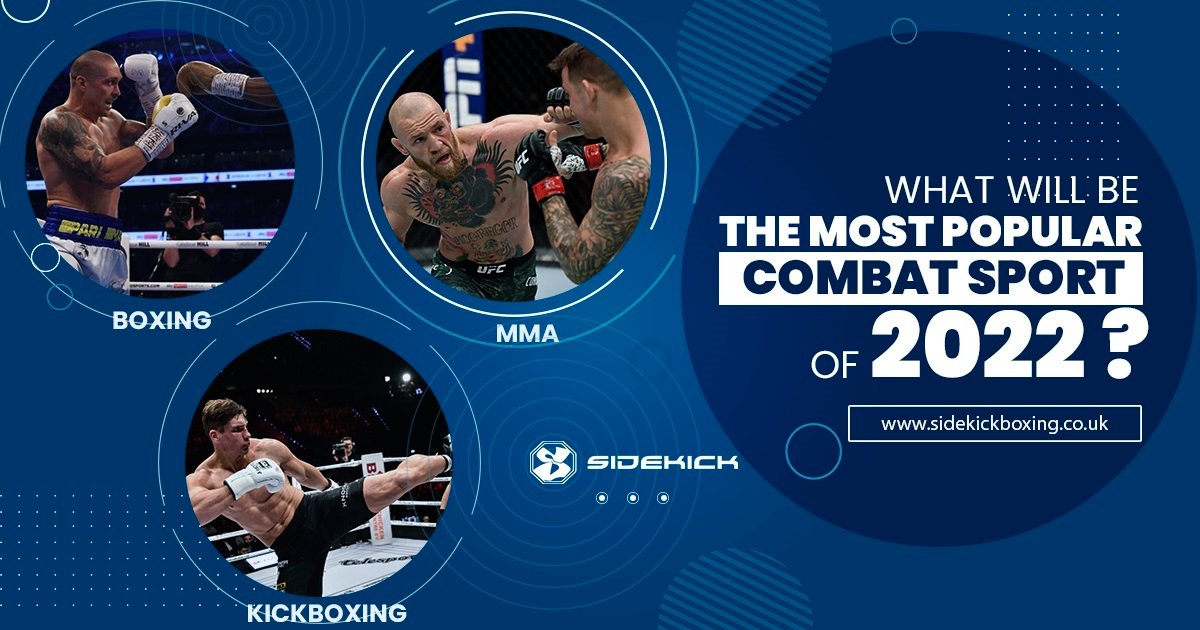 What will be the Most Popular Combat Sport of 2022?

Everyone wants to do what’s in right now and like anything in life, trends and popularity tend to change as quickly as anything. In one year, what might have been in can fade out the next, and it is just the same with combat sports.

So what makes a specific combat sport the most popular?

Even though the promoters and the fans play a massive part in making the sport grow, it seems our idols or the stars within the sport seem to draw people in even more. Boxing has always been demographically the largest combat sport of all, generally because it is one of the oldest forms of fighting. Not only that, but boxing has more variations of classes like non-contact, boxercise and fitness boot camps.

These classes are not as complex to teach compared to other martial arts like Muay Thai, which uses strikes from hands, elbows, knees and shins; it needs to be taught by a seasoned fighter or experienced coach. At the same time, someone with essential experience may teach boxing-fitness classes.

Combat Sport through the Decades

Even though boxing has always been popular, different combat sports have spiked in popularity in different era’s. In the ’90s, everyone wanted to be a kickboxer; this is probably because of Van Damme, who would do fancy roundhouse kicks in the kickboxing 1989 movies. In the noughties everyone wanted to be an MMA fighter, as the cage gave it a menacing look, and fighters wanted the cage fighter status.

In the 2010’s, it was a mix between boxing, MMA and K1 kickboxing; this could be because of the superstars like Anthony Joshua in boxing, Conor Mcgregor in MMA and Rico Verhoeven in Glory kickboxing bringing in the attraction.

Also, MMA and K1 themed promotions seemed to work well together, as they had the same amount of rounds, too, and both worked in a cage. However, over recent years boxing has taken the lead. With boxing having larger audiences, screened on TV and the stars earning millions of pounds, many kickboxers have transitioned to boxing.

Read our article ‘Kickboxing to boxing: a transition’ here.

However, chasing the pound note is not always the best option, as the fighters making the most considerable money in boxing are few and far between. Not only that, but another combat sport could spike in popularity, and a fighter couldn’t keep changing styles.

Recently, we have even seen retired fighters make their way back into the boxing ring like Mike Tyson, David Haye and even Carl Froch, Ricky Hatton, and Tony Bellew have spoken about coming back.

So, What will be the most popular combat sport in the 2020s?

As for being in a pandemic for almost a couple of years, all combat sports have been a little on hold, other than the promoters who have organised their shows without an audience, or in Eddie Hearn’s case, in his back garden.

Last year,  Medium.com suggests that the top 5 combat sports are:

We are currently seeing many exhibition boxing bouts with random match-ups, and the most talked about fight at the moment seems to be Jake Paul vs Tommy Fury. These fights are losing credibility with true boxing fans, and the significant fights like the heavyweight undisputed never seem to materialise.

The top-level of boxing can be very messy as there is no one organisation controlling the sport. Each fighter’s global rankings can vary dramatically depending on the sanctioning they are recognised with. This is where the UFC does brilliantly for MMA, as fighters are signed to fight only for their promotion, with one ranking, and this is why we predict MMA could be the biggest combat sport for this decade.

We would most like to see kickboxing as the most significant combat sport, and one day, hopefully, it will be as commercialised as boxing, but MMA still has never reached its peak, and it has a ton of potential. We expect to see the current promotions only getting bigger and new ones to come on the scene. MMA brings in audiences from most disciplines, and the fact Conor McGregor is making the headlines again, and Paddy Pimblett has just signed with the UFC will only draw in more attraction.

How do I get into MMA?

There are a couple of ways you can do it. If you are entirely new to martial arts, it may be best to start a particular discipline like kickboxing and grow from there. On the other hand, if you are pretty familiar with martial arts, there are MMA classes.

For more information, check out our blog posts here.