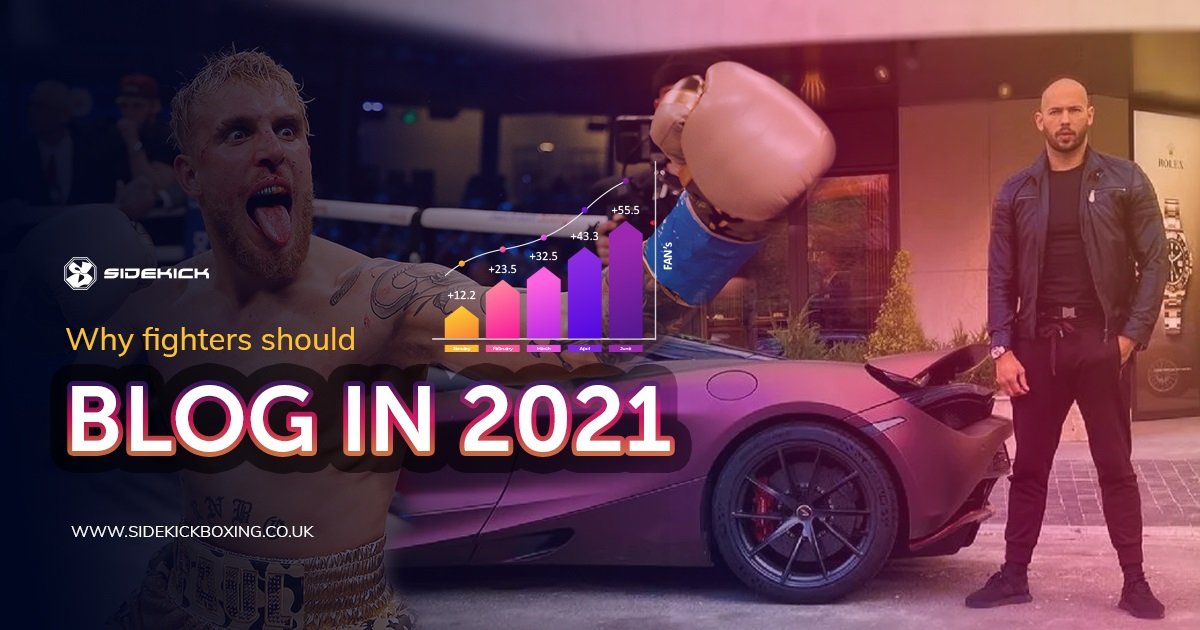 Why Fighters Should Blog In 2021

Today, we are in such a digital world. Our smartphones have become one of our most important devices, which we cannot leave the house without it. Everything we do is based on our smartphones, and if we are not watching others online, we are creating our content, and we probably don’t realise we are even doing it.

Nearly every fighter posts their training videos online to show off their skills, but in fact, this has only happened more and more over recent years.

Dan Knight from Sidekick claims he wasn’t in one photo or video training until he graded for his black belt in 2011. Facebook and other apps weren’t as easy to use like they are today, so posting training clips were less prevalent. But now, every fighter is promoting themselves online in some form or another. With social media booming, now is the perfect time to put all of your content together in a professional blog.

So, why is Blogging Important for Fighters in 2021?

Over 4 million blog articles are published every day, so it is apparent that it is such a popular way of getting views, and with a fighter, potential fans. As mentioned in a previous article ‘Grow an audience’, unfortunately for a fighter, it is not all about the talent that will make a successful fighter. A fighter must sell themselves enough to create an extensive enough fan base to make the fight sell.

The times have changed in recent years as fighters now network online with other gym owners, promoters, and fighters to get themselves out there, as before a fighters coach was also their manager and would line up their fights for them.

It wasn’t as easy to vet fighters and maybe watch their previous fight videos. A fighter would need to trust their coach, they have got a suitable opponent. Now, social media has boomed, fighters can promote themselves more and even look up future opponents. Fighters can also see what promotions they would like to fight on.

However, social media platforms like Facebook are gradually limiting the views to your daily content, so now is the perfect time to launch your very own website. It won’t be long before every fighter will have one, so it is a great time to get ahead of the competition.

Check out this infographic by SportTechie about the importance of social media in the UFC:

So, as fighters are constantly posting content or videos, structuring all their content in a professional blog could be the modern-day of getting established. It is undoubtedly challenging to achieve your goals as a fighter, and you need to get yourself out there. The best way to do this is by fighting regularly, making a name for yourself, and having your website with a blog. This should also feature all your fight videos, training clips, and favourite drills that will undoubtedly help you stand out.

One of our former sponsored fighters, Andrew Tate, gets searched on Google 4,400 times a month in the U.K alone. He has always been a very well known fighter on the circuit, but it wasn’t until recent years when he promoted himself through his website and other channels to get more famous.

Andrew Tate recently challenged YouTube star Jake Paul to a fight in a Vlog posted on his channel. Andrew did this to help boost his social media to more fans as Jake Paul has a huge following. Also, if the fight did ever go ahead, it should be in Andrews favour. After all he is a 4x kickboxing world champion.

Watch the video below of Andrew Tate calling out Jake Paul to fight. (Warning explicit language)

Read our article ‘The life of Andrew Tate’ here.

Blogging can even be useful for promoters too with CM Boxing suggesting that:

They also use them to share any news involving their fighters or just about boxing in general. One of the best things that promoters use their accounts for is showing live streams of press conferences and the weigh in, in the build up to a fight.’

What are the Benefits of Blogging?

Having your own fighters website and blog is a way to showcase all of your fights and achievements in martial arts, which would work as a CV for promoters and protential sponsors. It will also help grow your presence online, helping you create a more extensive fan base which also helps sell fights.

As you have already had the video footage or content about your fighting, it may take minimal work to put all together in a blog which will help get Google traffic.

‘Social Media is a great tool for MMA Athletes who want to expand their reach and be able to engage with fans. Most UFC fighters only fight a few times per year. They will typically see the most growth on social media around their scheduled fights.

This is due to interviews they have and general promotion for their fight. Fight promotions and media outlets will typically tag fighters in social posts to help increase reach. Many fighters view the UFC as a platform that can help them grow as a social media personality or influencer.

Having success doing so can help increase their earning potential inside and outside of the UFC.’

As a result of the new digital age we live in, having a website and blogging can benefit fighters in many ways. From promoting their won fights to even finding new ones, social media and blogging is a great way to get yourself known as a fighter and interact with many different people as well as showcase your knowledge and skills in the field.