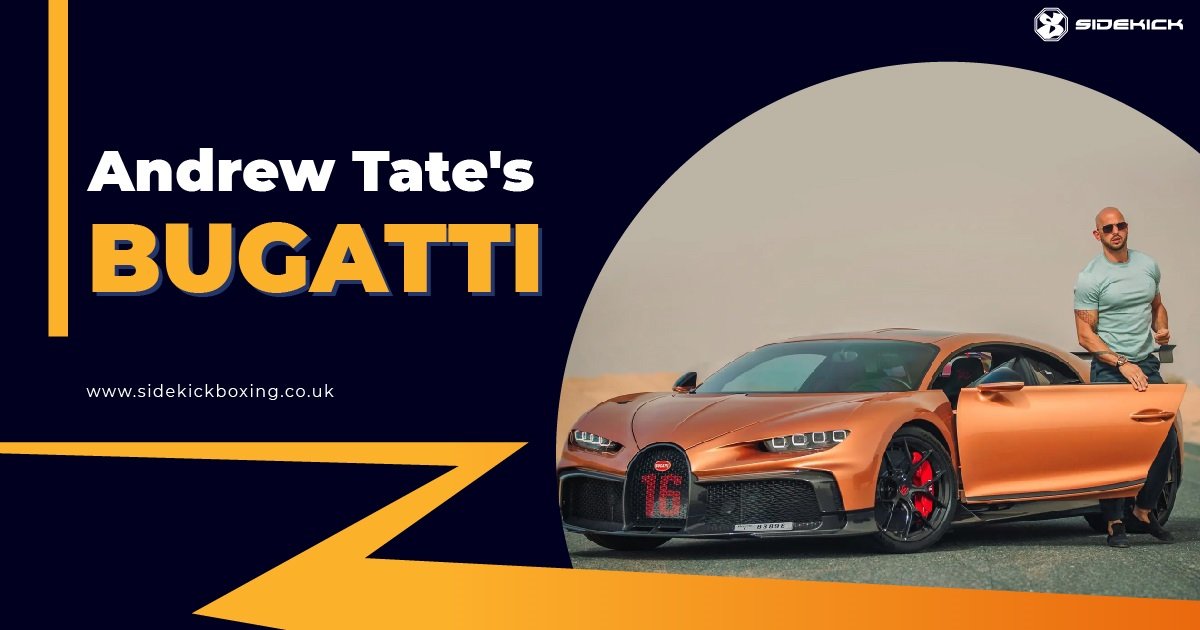 We all love the thought of owning something unique, especially a supercar. Yet, in reality, it is usually only the high-profile celebrities and organisations people who can buy such luxuries.

They want a unique powertrain to identify them, and there is no risk of another automobile showing up next to them. Well, former kickboxing champion and YouTuber Andrew Tate managed to secure a 1-in-60 Bugatti Chiron PurSport custom made entirely for Andrew.

This resulted in an incredible work of art.

Andrew Tate hasn’t always had a lavish lifestyle as he grew up on a council estate in Luton, driving around in a clapped-out Mazda.

So, how did Andrew Tate make his money?

Andrew is someone who has never wanted to work a 9-5 job. So, he always tried in any way possible so that he didn’t need to. Andrew dedicated many years to training in kickboxing to be the best fighter in the world; then, when he reached that level, Andrew wanted to capitalise on it and earn as much from fighting as possible. He would even gamble on himself to win with his opponents.

Additionally, Andrew frequently visited the casino to increase his earnings. A kickboxer may be fortunate to see up to £10,000 in prize money for a top international fight, because kickboxing is not recognised as being the most lucrative of sports. Not long after realising this, Andrew decided it would be better to start enterprises or use his time in other ways.

Before moving to Romania, he started his own advertising organisation. Then he decided to get involved in the X-rated industry. This was when Andrew and his brother Tristan began to make their fortune—investing their profits in Bitcoin and Hustlers University 2.0.

Since then, Andrew Tate has become an internet sensation with his Youtube videos gaining millions of views. It is alleged that Tate reached a net worth of around 30 million dollars as of 2022.

With that wealth, a one-in-sixty £3 million Bugatti doesn’t sound too expensive.

Based in Dorlisheim, France, Bugatti is a premium car maker. Ettore Bugatti, an industrial designer of Italian ancestry, established the organisation in 1909. Up until Ettore relocated to France, Bugatti’s headquarters were in Germany.

Bugatti is known for its incredible design, performance, and many race victories. The Bugatti owned by Tate is a Chiron PurSports. It is a rare car, with only 60 being made, and it is more similar to a race car than it’s Chiron siblings.

The purport was released in 2020, offering only sixty units worldwide. Andrew announced his special yet expensive purchase in December 2021, sharing wisdom and flexing the fact that his garage now has twenty-two supercars. Pur Sport built this hypercar with performance in mind and marketed it as being “incomparably nimble, incomparably bold, incomparably BUGATTI.”

The classic 8.0-litre W16 engine from Bugatti powers the car. According to these figures, this hypercar should be swift, and it is. Thanks to a sporty chassis and meticulously thought-out suspension system, the Chiron Pur Sport accelerates from 0 to 62 mph (0-100 kph) in under 2.4 seconds before reaching its highest speed of 217 mph (approx. 350 kph).

With copper carbon bodywork, the kickboxer’s model is a work of art and has a very dynamic appearance.

With copper carbon bodywork, the kickboxer’s model is a work of art and has a very dynamic appearance. The inside is black, with subdued red and copper accents and a custom headrest that reads “Tate.”

The firm posted a sneak peek of the outcome on their official social media page and said that this particular Bugatti Chiron Pur Sport variant is completely customised.

This Chiron Pur Sport, in an exceptional paint finish recently delivered to its new owner, passed Bugatti’s exact quality audit, which included a thorough analysis of each “Copper” carbon body panel to check for even the tiniest paint defects.

What is the cost of the Bugatti Chiron Pur Sport?

Unless Andrew is shipping it around the world in a container to travel in style in other nations, the hyper-car spends most of its time in Romania, where Andrew lives. It doesn’t end there for the Bugatti enthusiast because Andrew also bought a matching Chiron watch made by Jacob and Co.

Every aspect of a watch honours the Chiron. The movement, or “engine block,” which is meant to emulate the Bugatti engine, is hidden beneath a vast sapphire crystal so everyone can see it. The case is shaped to resemble the flowing lines of the Chiron. The organisation uses an inclined tourbillon for the first time with the 30o inclined tourbillon in the Bugatti Chiron Tourbillon.

The tourbillon is even more mesmerising because of its “flying” feature, which supports the regulating organ only on one side. It is simpler to admire this unanticipated intricacy because of the 30o inclination. The price of the vehicle for this year is a whopping $560,000.

Hey, if you can afford a Chiron, you might as well throw in the watch ay?

To read about Andrew Tate’s life story check out our article here.