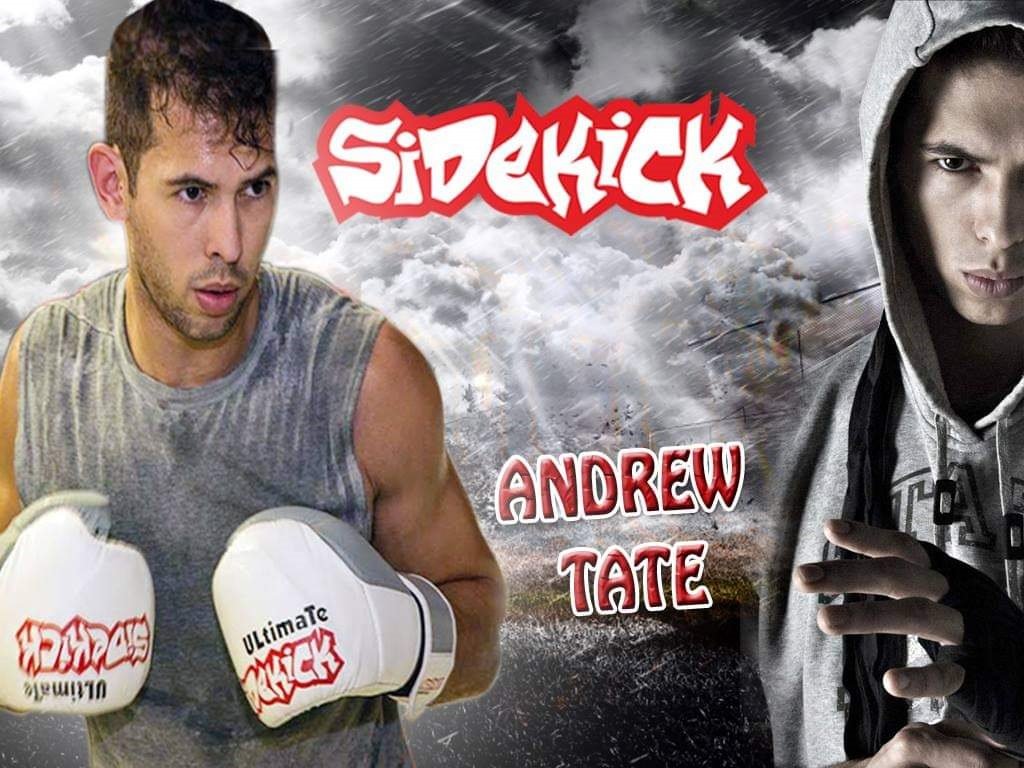 If you have recently seen videos online of a man driving around in supercars, getting out of private jets and claiming to be the closest person to a real-life James Bond, you probably have come across Andrew Tate, also known as Cobra Tate.

Who is Andrew Tate?

Andrew Tate is a British-American former professional kickboxing world champion who fought in the cruiserweight and super cruiserweight divisions.

Throughout Andrew Tate’s kickboxing career, Sidekick Boxing sponsored him, providing him the best quality kickboxing equipment to aid his training such as the original Ultimate boxing gloves.

As Andrew Tate is a very outspoken person with strong opinions, he endorsed the quality of the Sidekick brand so much so, people believed he owned the kickboxing equipment company himself.

Below is an article about Andrew Tate’s life and his kickboxing career.

I am the third in a line of “Andrew”, but this is my middle name only. I am Emory Andrew Tate lll and this short biography will remove some mysteries of my history. My grandfather, Emory A. Tate Esq (1918-2007) fought in WWll before becoming a lawyer in Chicago during racially charged times. As a Black Man, this shaped his world view and he was a very strict, very hard man indeed. As a boy he pushed a plow with mule through the hard clay dirt of Georgia, forced to work on the farm. At age 12 he pushed a plow that only grown men normally handled. Then he ran away, never to return to the farm. He did some bare-knuckled fist fights as a young man and distinguished himself in hand-to-hand during the war years.

His son, my dad, Emory A. Tate Jr. was a young athlete, learning wrestling in school and developing the early forms of Tateshinkai strikes as a youth. His job in the military for 11 years took him on many adventures and little is known for certain, except that my dad never loses. He is my role model in many ways, even as I write poetry like he does.

I was born in Washington D.C. at Walter Reed Army Hospital, early one morning Dec 1, 1986. The doctor wanted to award me a perfect 10 on the birth scale, but settled on 9.5.
Two weeks overdue, I was nose-breathing already as the doctor held me upside down by my heels and my right fist was inside my mouth as I suckled. The doctor pinched my thigh to get a response, and I growled, knitting my brow and trying to crane my head up to see who had attacked me. The doctor paled, shocked at my defensive powers. I did not cry.

I never learned to cry for attention, only used grunts to indicate hunger or discomfort, but mostly I was silent. I had a large, new crib, but most every night I spent asleep on my dad’s chest. He would place me there and sleep still, never moving in the night and our heartbeats were (and are) as one.

I learned to defend myself soon after I could walk. Long before my first punch into a pillow, I learned balance, how to step backward after being pushed gently in the chest. Dad made a game of it, a game which ended with a savage shove across a living room, sending me into a dramatic backpedal. I stopped myself with my head one inch from cracking into the far wall. That was the final test.

At age 4 I took second place in the county wrestling championships for kindergartners, and Mum swears that I would have won if Dad had been there to shout instructions on how to finish. Dad was working minimum-wage jobs overtime since his military career had been ended. Both mom and dad worked so that we could survive. Things became so hard that we decided to go to England and try a life there, only minus dad.

So by age 11 I was man of the house, with a younger brother and sister (plus mum) to look after. As soon as I was old enough I got a job moving 80lb boxes of frozen fish into the market at 5am. Then a full day of school. Weekends found me at the market stall where I perfected my knife skills, flawlessly filleting fish at blinding speeds. After some time I never cut my hands at all, not even a nick. I learned to play drums.

While growing up in Luton, raised by a single mother, we endured a lot of teasing because of your American accents. I learned to talk smarter than the bullies, and never needed to raise my fists. When my younger brother beat up the school bully, the boy’s mother came rushing to our house to confront our mum. To our surprise, she thanked our family for finally putting the bully in his proper place. Unlike some great fighters, I have never been in a pub fight or a brawl. I have never struck a person in anger.
I credit my mum with so much, watching her struggle to support us and stand behind our decisions. In her way she is fully as tough as anyone I have ever met. She was athletic in her youth, and she punches like a trained fighter! Trust me!

Mum enrolled us in a self-defense course and I grew stronger. One day at the carnival, men paid me a pound note to punch the machine and make the bell on top ring. Grown men could not punch that hard, but as a mere lad, I could ring that bell near 100 percent of the time

Fate introduced me to Amir Subasic and history is made. Bhodukai was a nice fit with the styles I brought from my youth, and all forms were incorporated into Tateshinkai. For the first time, the Dutch have seen a fighter who does not hold his hands high at all times, who rarely uses the “turtle” as a stance. Relying on superior speed and power allows for forms too risky for average fighters to even attempt.

Along with my poetry I have retreated to a magical land of Wudan Mountain where I have lived for centuries of human time, learning forbidden arts. I fight merely to demonstrate to others that Tateshinkai is true. My recent fight in China proves that there is interest both in the West and in the East.

I was in the top 1% if GCSE scores but I opted to join the workforce and form my own businesses. Also I have won 4 world championships. People think my ideas strange, but I was raised do be an individual. Conformism is not in my genes.

I enjoy chess, as my father and grandfather before me. Poetry and beauty in all things. I believe that men were made to be with women. Sometimes my words seem offensive but I only want to be thought-provoking in a world where too many people are losing the capacity to think independently. This is the way I, too, will raise my future children.”

Tate later scored a few more crushing victories and won the IKF- International Kickboxing Federation British Cruiserweight title against Daniel Hughes with a devastating first round KO, then on March 19, 2011 he fought for the first time for ISKA world title in France. Andrew lost the fight for the vacant ISKA world Full-Contact light heavyweight championship to Jean Luc Benoit on points after 12 rounds however contested that he was the true winner. Due to the fight being so closely matched, three months later they had rematch in Luton, England, but this time Tate became champion defeating Benoit via spectacular KO in round 8 of the scheduled 12 rounds.

He lost a close battle for the It’s Showtime 85MAX world title against champion Sahak Parparyan on May 12 2012 in Kortrijk, Belgium on points.

On December 2, 2012 Tate participated in Enfusion 3: Trial of the Gladiators reality final tournament, to determine #1 kickboxer of the world in -85 kg category at that time. He qualified for tournament in August 2011 in Ohrid, Macedonia stopping Sammy Masa by second round KO and Adnan Omeragić by first round KO. He scored an easy victory in semi finals knocking out Ritchie Hocking with punches in the first round, but surprisingly lost in the final via first round flying knee KO from Franci Grajš, who fought hard battle in semi final against Sahak Parparyan.

In 2016, Tate competed as an “other” housemate on the seventeenth season of the British version of the Dutch reality television series Big Brother. He quickly saw himself as a strategist, admitting that he would get in the Big Brother house by any means necessary. The Others targeted specific people for a fake eviction, of which Tate was seen as the instigator. On Day 4, Alex Cannon and Jackson Blythe were fake evicted and moved to the Other house, with the public voting Tate and Ryan Ruckledge in to take their places. Tate gathered a handful of housemates over, saying that 80% of them were “snakes”. Immediately, this caused a lot of conflict, and Marco Pierre White Jr. and Chelsea Singh decided to break out of the Big Brother house, only to return a few hours later. Tate was surprised by this outcome, saying to Big Brother that his plan had worked a little too well.

On Day 5, the Others were set a secret mission to convince the housemates in the Big Brother house to nominate one of their own for the first real eviction; this would be Laura Carter. However, after the Others had watched the previous night’s events, and with Cannon and Blythe expressing their discontent at the drama caused, Tate was not optimistic about whether the task would be successful. In the Diary Room, he said to Big Brother that the Others were not unified in the task anymore, there was a distinct lack of support, and that Ruckledge was of no use to him. On Day 7, Tate was removed from the show for actions outside the house prior to the competition. The secret mission would still continue, but Ruckledge would fail to convince the housemates to nominate Carter, and on Day 9, he returned to the Other house.

It was later revealed that Tate had been removed due to a video, obtained by The Sun, of him allegedly “hitting a girl with a belt”. Tate would later make a statement on his Twitter account that the actions were consensual, the belt was actually made of felt, and that the Sun video was heavily edited to make him look bad. In a Facebook video, he claimed the real reason he was removed was because the programme’s producers were “worried” about his “master plan”, which was denied by Channel 5. Nonetheless, his picture on Big Brother’s Bit on the Side was blacked out (although Emma Jensen’s picture was grey; she was later ejected as well), and barely any mention was said of him in later episodes. Towards the end of the series, his picture in the Big Brother house was seen in certain shots.

Andrew Tate and his brother Tristan moved to Romania to set up their empire in trading in Bitcoin. Andrew also sells his Andrew Tate courses which he claims will make you more of an alpha male. When he first started these Andrew Tate courses, many believed it not to be a serious venture, but they seem to be very successful and he has sold many of his programs.

The Andrew Tate courses include:

Disclaimer: We are not affiliated, associated, authorized, endorsed by, or in any way officially connected with Cobratate.com and any of its subsidiaries or its affiliates.