Home>Kickboxing and MMA news and equipment>Dambe: The African Martial Art 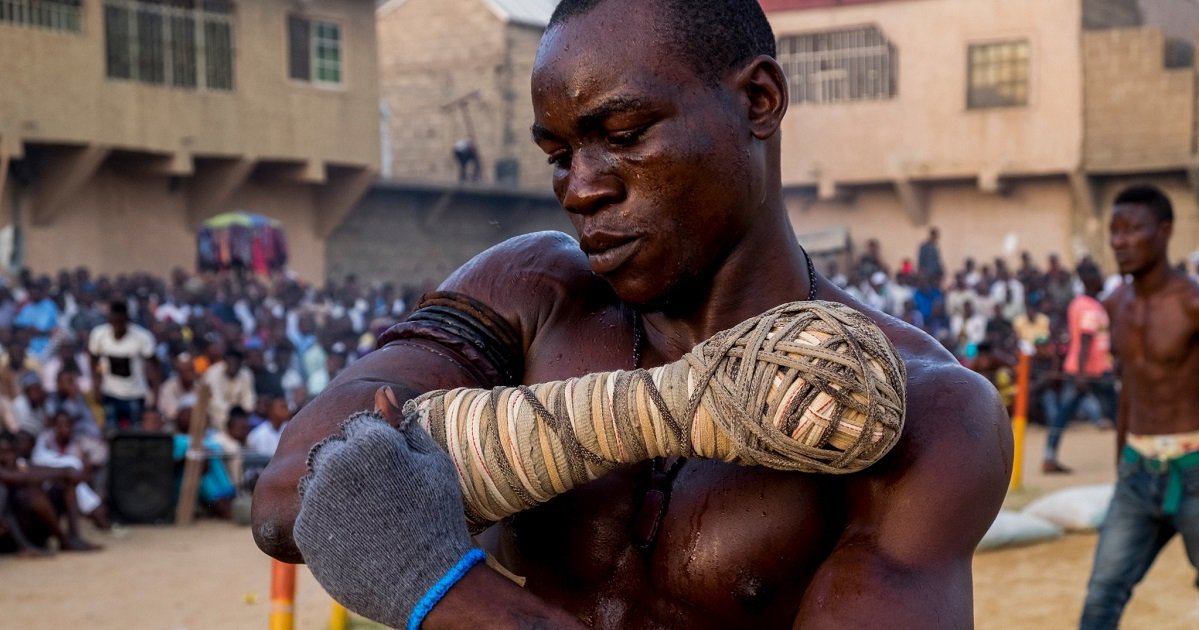 When people talk about the most challenging combat sport, you can bet your life ‘Dambe’ never gets a mention. Is that because it is not tough enough to even get considered, or simply because people haven’t heard of Dambe?

What is Dambe Boxing?

“Dambe” derives from the Hausa word for “boxe” and appears in languages like Bole as Dembe.

Dambe is an African combat sport which originated in Nigeria and is thought to date back centuries. The sport was historically practiced by Hausa butchers around harvest or festival time and was considered a test of bravery.

Dambe fights are held outside on the sand, and each fighter has one hand, which is their striking hand wrapped in rope ‘Kara’, similar to what is used in Muay Boran bouts.

This is to make their hand their spear. Initially, fighters were allowed to wrap glass into their Karas, but that has been abolished in modern times.

The BBC suggests: ‘A brutal combat style, Dambe is a traditional sport associated with the Hausa people, one of the largest ethnic groups in Africa.

It may be steeped in tradition, with its origins dating back to the 10th century, but it is fast adapting to the modern world, attracting millions and millions of views online in recent times.
“We’ve gone from having our content watched by 200,000 people in 2017 to over 24 million in 2019,” Dambe promoter Anthony Okeleke told, BBC Sport Africa.’

There are very few rules in Dambe fights, fighters are allowed to punch and kick their opponent, and it has even been known for fighters to eye galge.

Contests are held over three rounds; however, there is no time limit to each round. Only when a fighter is knocked down (referred to as ‘killed’), or an official stops the round ends.

To see footage of Dambe Fighting, watch below:

What Are the Rules of Dambe?

Dambe is brutal. There are only a couple of rules followed in Dambe boxing:

Despite the lack of established weight classifications, competitors in Dambe contests are usually of similar size. The strong-side fist is the principal weapon.

The “spear” fist, on the strong side, is wrapped in a piece of cloth that is firmly tied cord. Some boxers would coat their spears in sticky glue mixed with shards of broken glass; nevertheless, this practice became outlawed. A chain is frequently looped around the lead leg, used for both offensive and defence. Kicking can also be done with the unwrapped back leg.

Fight Library suggests: “Talking about the nature of the sport, the primal nature of this sport. It’s not a game in that sense. You don’t play boxing; you don’t play dambe. You don’t go down to your local gym and play dambe; this is a lifestyle. These fighters live in camps where they train and live with one another […] They represent houses. […] They come from some of the hardest communities in Nigeria, which is a hard country to live in. This is their chance to become superstars and be sponsored by a governor and make some serious money.”

Is there a Dambe Fighting Championship?

African Warriors Website suggests: Our mission is to offer opportunities to African athletes and take Africa’s ancient fighting traditions to the world. We host events, produce digital fight content and manage a national network of athletes.

While dambe has been around for generations, African Warriors FC’s mission is to take the sport to new heights worldwide. Maxwell has sought to introduce rulesets to the sport, similar to those used by commissions in boxing or mixed martial arts so that it is more easily understood by those who are not Nigerians.

In terms of promotion, African Warriors want to take the sport worldwide. Dambe has already made its way across Africa. Maxwell and his organisation aim to assist the fighters to gain more exposure and grow the sport as a whole so that they may prosper.

African Warriors FC also incorporates wrestling matches into their schedule to increase interest in the sport. While it isn’t entirely freestyle wrestling, the parallels are striking.

How much do Dambe Fighters get Paid?

Dambe is certainly not the highest of paid sports, and some get as little as £20 a fight. However, considering boxing journeymen in the U.K might only make a couple of hundred pounds, Dambe is not downright dreadful as victorious fighters can earn up to £400.

However, despite their celebrity, Dambe Warriors remain underpaid. The irregular payments are under the supervision of the chiefs, and there are no welfare or health benefits for the participants.
Spectators also give their favourite or winning fighters gifts.

Dambe is another great traditional fighting style, yet with its own twist on things. If you’re ever visiting Nigeria, it may be worth watching Dambe live, and if you are a fighter and brave enough, you may even be able to have a go.