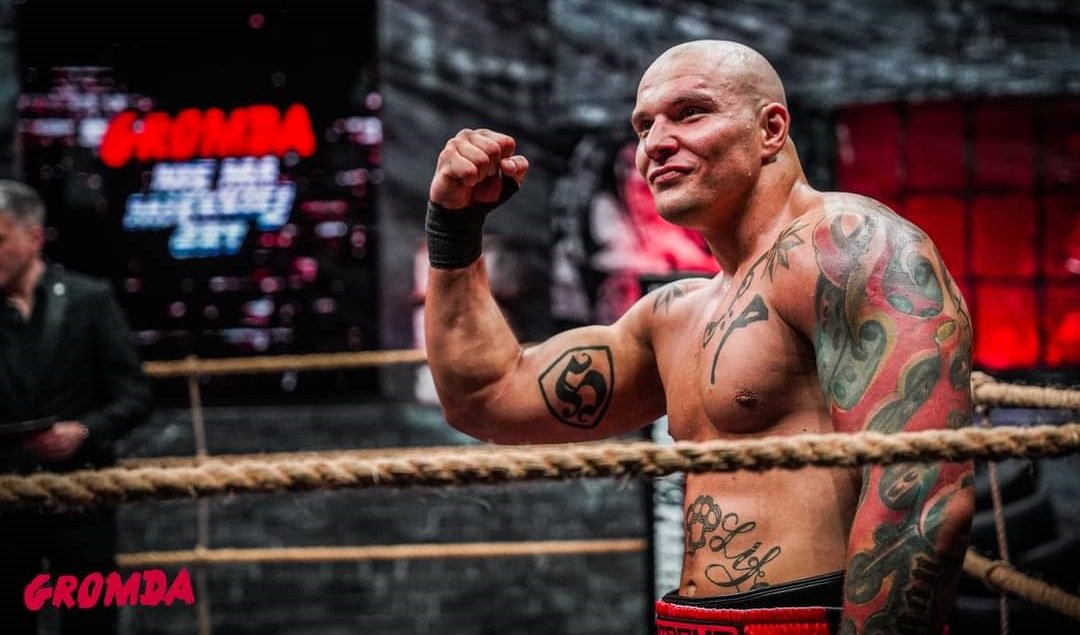 Imagine a fight promotion with no weight classes, a tiny boxing ring and bare knuckles; it would sound crazy, right?

Well, there is a promotion doing just this, and if you are a combat sports fan, you may have already seen them online, Gromda.

Groma, meaning ‘Gathering’ in Polish, is a bare-knuckle boxing promotion founded by Mariusz Grabowski and Mateusz Borekwhich in 2020. Groma has a dark fight club style image, and the promotion’s branding looks striking, with the Gromda red and black logo looking like blood dripping.

The venue setup and promotional posters also have a rugged appeal and follow the branded red and black colours. Since the first Gromda event in June 2020, it has been rapidly growing in popularity, and they already have a following of over 100,000 in their already seven events.

MMA Root.com suggests that: ‘GROMDA brings together players who compete in a small ring with bare fists. At each gala we watch a fierce tournament between eight Gromadziarzami and a few super fights. Usually, these are 3-4 additional duels that fill the card and allow us to enjoy the event longer. The first gala of the organization took place on June 6, 2020.

The project caught on and echoed in social media. The organizers boasted about good PPV sales and decided to continue their idea. Now we know that GROMDA attracts many fans in front of the screens and is a sports event that is eagerly commented on on the Internet. The duels are good to watch, because Mariusz Grabowski shot himself perfectly with the rules of fought battles.

Competitors compete to the end if they do not settle their clash in 4 rounds of 2 minutes. The small boxing ring 4 by 4 meters does not allow you to escape, and the lack of a weight limit guarantees heavy knockouts.’

How is Gromda different from other fight promotions?

As with any new promotion, it needs to offer something new and exciting to grab people’s attention. Many promotions are already doing Bare Knuckle Boxing, but Gromba is ticking all the boxes for the complete gore factor.

Not only are the fighters without any gloves, so the fights are bloody and brutal, they are also fought in a very small 4x4m boxing ring to make it non-stop action with nowhere to escape. And to think some boxers fight in over 7x7m boxing rings.

To top it off, Gromda has no weight classes, so the mixed match in fighters’ weights makes it even more attractive to who’s going to win, especially as the heavier is generally, the more favourable. Fights Bloody and brutal fight based on the

The rounds are 4×2 minutes so that the fighters will be more charged for each round, and without any scorecards, it brings more intensity to the fight for a knockout.

Let’s face it, it’s a good job. The Polish are tough because to fight on Gromda with no weight class; you need to be hard as nails and pack a punch. Gromda fighter Krystian Kuzma, also known as Tyson, left his opponent Łukasz ‘Brodacz’ Załuska stretched out after a brutal knockout on Gromda.

TalkSport suggests: ‘After lying prone for several minutes and with medics rushing in to attend the fallen heavyweight, ‘Brodacz’ left the ring on a stretcher.

For Kuzma, he advanced to the final of the bare knuckle tournament and secured another first round finish.

The tournament featured a four by four meter ring, four regulated rounds before one final fifth round with no time limit – meaning the tournament was designed for viral knockout moments like Saturday night.’

As with any combat sport, there are risks of serious injury. However, Gromda put everything in place and provided all the necessary medics to make it safe. As brutal as Gromda is, with the 4×2 minute rounds, the fighters fight less than most over promotions.

K1 has 3×3 minute rounds, which is 9 minutes as opposed to Gromda 8 minutes.

Where to watch Gromda TV?

The fights can only be accessed by purchasing a paid PPV subscription.

Gromda is based in Poland, so UK fans looking to watch the thrilling action get the Gromda TV app from the Google Play store here: https://play.google.com/store/apps/details?id=pl.streamonline.gromda&hl=en_GB&gl=US

Check out this video of some Gromda fights below:

Gromda certainly looks very professional. However, with the gory and brutal knockouts, it’s not everyone’s cup of tea.