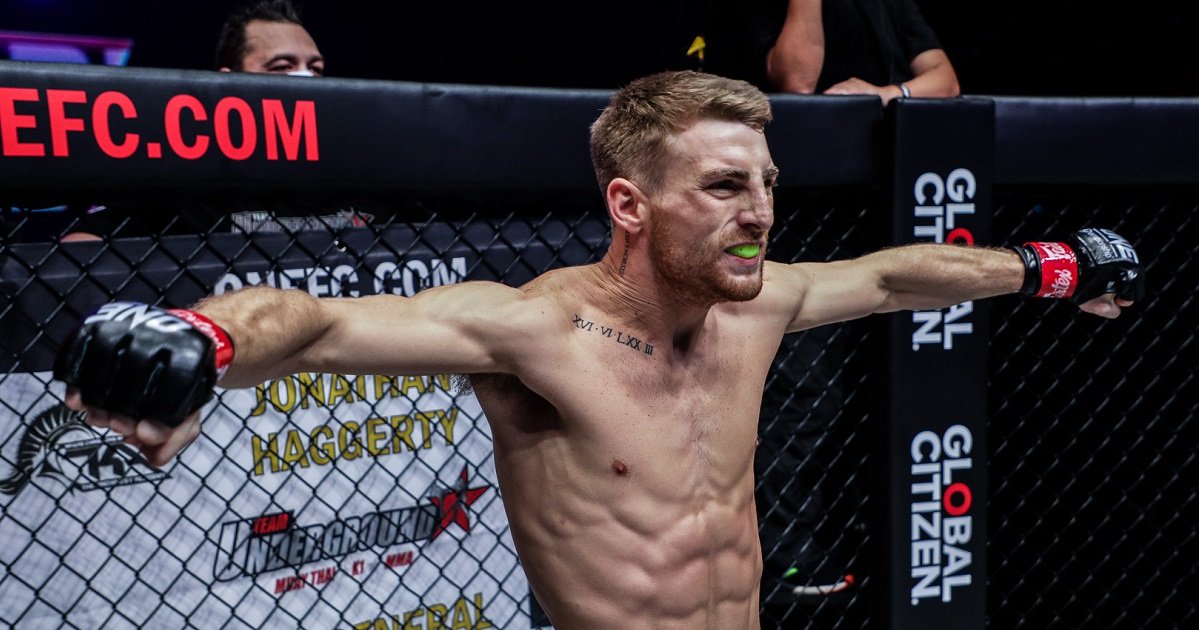 As Muay Thai is a sport that is far from being as commercialised as the likes of Football, you wouldn’t ever imagine a fighter making the big headlines.

That is the case for former Muay Thai Champion Jonathan Haggerty, not just because he fights at the highest possible level in Muay Thai.

But because he is also not shy to mix things up a bit, as he is now planning a hybrid fight with UFC legend Demetrious Johnson before moving to MMA.

Who is Jonathan Haggerty?

The fight-life is something fighters have fallen in love with at any age, and others were simply born into the fight game like it was already mapped out for them. Jonathan Haggerty, an English Muay Thai superstar, is a fighter that Muay Thai was clearly his destiny.

Haggerty first started training in Muay Thai at seven years old as his father was also a keen practitioner. Like most boys at that age, Haggerty also enjoyed football, but he soon chose to go down the path of Muay Thai, and he had his first bout just one year later.

Since then, he has made his dreams come true and is considered one of the best Muay Thai fighters in the world.

At the age of 12, Haggerty became an amateur competitor and was soon racking up the wins on the circuit. Jonathan won an English title multiple times and won the British Champion and European championships.

After making his pro debut in England, Haggerty has fought in Thailand, Indonesia, and Singapore for the following eight years. So, unlike some Muay Thai fighters who have never visited the sport’s birthplace, Haggerty has had the opportunity to fight in front of crowds excited about Muay Thai.

“It’s amazing,” said Haggerty. “You know, it’s just funny how Muay Thai can take you worldwide. It’s brilliant. And it’s something that I’ve loved to do. I like travelling also, so it’s a bonus. And it’s unreal to be doing what I love and travelling at the same time. It’s great.”

Haggerty turned pro in 2014 and continued dominating the sport across the globe. He knocked every opponent out until he experienced his first professional loss on Yokkao 28 against Ja Kiatphontip.

This considerable success allowed Jonathan to fight in one of the world’s best combat sports promotions, ONE Championship.

He made an incredible impact on One Championship. In his second fight in 2019, Jonathan beat Muay Thai World Champion Sam-A Gaiyanghadao to win the ONE Championship Muay Thai Flyweight Title.

In his ‘About’ section in One Championship, it says:

‘Despite his relative youth, Former ONE Flyweight Muay Thai World Champion Jonathan Haggerty is already an incredibly-accomplished martial artist. He began training in Muay Thai at the age of 7 under the watchful eye of his father, who was himself an active competitor and had his first bout just one year later. Since then, he has relentlessly pursued his dreams of becoming the best striker in the world.’

There is one fighter that Haggerty couldn’t get the better of, and that’s the famous Thai Rodtang Jitmuangnon, as he has beaten Jonathan on two occasions.

However, Rodtang is no walk in the park as he has had over 320 professional fights.

Who is Rodtang Jitmuangnon?

Rodtang Jitmuangnon, the ONE Flyweight Muay Thai World Champion, began training at the age of seven, like many other Thai fighters before him. When he first started, he was a shy boy who avoided conflict and showed little enthusiasm in training or competition, but that all changed when he had his first professional Muay Thai match at ten.

He returned to the ring with newfound enthusiasm, motivated by the prospect of earning money to support himself and his family. Rodtang began his training at a tiny camp near his village of Pattalung, but quickly moved on to the renowned Jitmuangnon Camp in Bangkok to further his skills.

Many fans were ecstatic at the prospect of watching Haggerty compete in the World Grand Prix competition against Rodtang. Under the ONE Championship banner, the two had met twice before. Rodtang defeated Haggerty in a unanimous judgement in 2019. Rodtang won the rematch the following year via knockout in the third round.

Sadly for Haggerty, he had to pull out of his last competition on One Championship due to health reasons. This bout was against Walter Goncalves and was part of the flyweight Muay Thai Grand Prix.

Jonathan posted a picture on Facebook of him on a hospital bed, saying:

“With the most profound regret and sadness, I have had to withdraw from the tournament due to health reasons.

Camp had been challenging due to health reasons from the very start; however, I truly believed I had overcome them and was back on track and ready to go into this incredible tournament and give it everything I could to win…….

I’d like to send my apologies to Walter Goncalves and wish everybody in the tournament the very best I know you will all put on one hell of a show, without a doubt the best strikers on the planet 🌍

Thank you to @onechampionship for everything you do and the incredible platform you provide for taking our sport to the very top. Thank you also for the excellent medical support, for making sure I was looked after in the best way possible and for putting my health and well-being first; thank you🙏🙏🙏

I’m profusely sorry to all the fans that I’m unable to compete in the world Grand Prix; I am devastated 💔

I will not let this Define me! I will overcome this and be back where I belong 🙏💔. “

Haggerty was feeling poorly and hence was not medically approved to compete, according to a statement given by ONE Championship to Sportskeeda:

‘Jonathan Haggerty was not medically cleared to compete after feeling unwell. We wish him a speedy recovery and look forward to returning to the Circle.’

Since the withdrawal of his previous fight, Haggerty is potentially fighting former UFC star Demetrious Johnson in a One Championship special-rules hybrid fight. Demetrious Johnson has recently beat Rodtang Jitmuangnon in a hybrid bout, and now Haggerty wants a piece of the action.

Haggerty told Talksport, “I’m taller; my footwork is better than Rodtang and more evasive. Also, growing up from a young age in an MMA gym, I know the basics. If it goes to the second round, I would be better than Rodtang.” So what is a hybrid fight? A hybrid fight mixes two different combat sports, Muay Thai and MMA. It is a 4 round contest, and the first and third rounds are under Muay Thai rules, and the second and fourth are under MMA rules.

Haggerty and Harrison are two of the biggest names in Muay Thai in the U.K, but have they ever fought?

Their paths have crossed on many shows, yet they have never fought each other as they are, in fact, in different weight classes. Please read our article about Liam Harrison here.

Jonathan Haggerty is an inspirational Muay Thai fighter and a role model for the younger generation of fighters. It is a testament to prove that anything is possible if you put in the hard work and dedication. We continue to follow his exciting career.