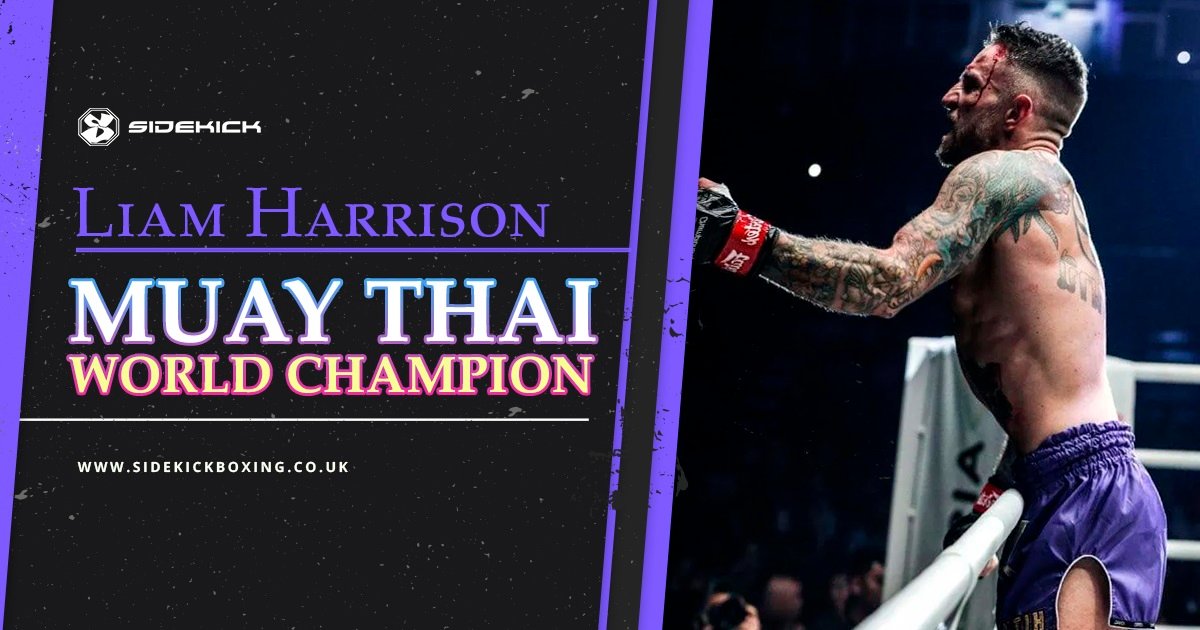 As Muay Thai is a sport that originated in Thailand, you would like to think the Thais themselves would be setting the standards; you wouldn’t imagine an Englishman to be one of the biggest stars in the sport.

That is the case for no-other than Leed’s very own Liam Harrison, who has had more fights than you can shake a stick at.

Who is Liam Harrison, and how many fights has he had?

Liam Harrison, also known as The Hitman, is a British Muay Thai fighter born on 5th October 1985. Liam started his journey in Muay Thai at just 13 years old when his cousin first introduced him to the sport.

‘Harrison fell in love with the striking art immediately, and his passion for Muay Thai was so fierce that he even left school to pursue his dreams of becoming a World Champion. By the time he was 15 years old, he had already developed a fearsome reputation for his knockout power and aggressive, high-pressure style, which earned him the nickname of “Hitman.”’

Liam joined the Muay Thai gym Bad Company in his hometown under the instructor Richard Smith, and he is still training there to this day. Liam took to the sport like a duck to water, and It wasn’t long before he started making waves on the circuit, and at just 17, he was ranked No1.

Liam is renowned for having a very aggressive fighting style with super fast striking; he also loves a sweep or take-down for the fans. He has a monstrous left hook and devastating low kick responsible for his 43 knockouts.

‘Liam Harrison, also known as the Hitman, is one of Muay Thai’s most aggressive fighters. He has a come-forward, all-out style that has won him fans the world over. He is also known for his hard sweeps, heavy hands and most of all, his crippling leg kicks.’

How many Fights has Liam Harrison had?

Today, Liam Harrison has had 115 Muay Thai fights and eight world championship titles. Muay Thai has become his life as he has fought in many countries and lived in Thailand along the way. Liam certainly ticks all the boxes as an athlete, as with over 1 million social media followers, he is well-liked.

You would think a fighter as tough as Liam would have an iron mind, but even the best fighters in the world can need some mental support, so Liam uses his good friend and mind coach Vinny Shoreham to help him prepare mentally for his fights.

As with any fight with Liam Harrison, you can expect fireworks, and he has fought many of the world’s best.

His last fight was last year against Brayan Matias on the Muay Thai Grand Prix: Road to One, in which the winner will get the opportunity to fight in the promotion One Championship. After five tough rounds, Liam got the decision.

This fight was back in 2019 when Liam fought Rodlek in a complete Muay Thai rules contest, using 4oz MMA gloves instead of boxing gloves.

This is something the promotion of One Championship likes to do to make the fight even more exhilarating.

Unfortunately, Liam didn’t get the win this time, but with Rodlek having 177 fights, it wasn’t going to be easy. Watch the video below; it is truly an epic fight.

This was a One Championship bout, and Liam won spectacularly by knocking out Mohammed Bin Mahmoud in the opening round.

This is Liam Harrisons last fight and it has got to be one of the best fights ever, not just in Muay Thai, but out of all styles of fighting.

There was a crazy 5 knockdowns in just one round.

Watch the video below to see who won:

Liam has had some fantastic fights. However, there is one British Muay Thai bout that would be amazing to witness by two legends, Liam Harrison vs Kieran Keddle.

Kieran Keddle was also a World Muay Thai champion so it would have been a great fight. Unfortunately, the fight never happened; however, there were talks of a potential fight on Dan Greens’ show mid-2000s.

However, Liam’s coach Richard rejected it as Liam was only in his early 20s and wasn’t quite ready to fight someone as seasoned as Kieran just yet.

As with every fighter, they can’t fight forever, so it is essential to use their initiative to plan their future career. Muay Thai is a sport that requires endless hours of dedication, so it is complicated for a fighter to have another job.

Furthermore, Muay Thai doesn’t work entirely as well as football, so early retirement is probably off the cards. Liam has also chosen to become a Muay Thai coach. It is a win-win for him as he is keeping his hand in more, but he is handing down the incredible experience he has gained in the ring. Liam certainly practices what he preaches when it comes down to teaching.

Liam demonstrates his technical drills to his students and shares the videos on social media of the same drill working effectively in one of his fights. Liam is not only a fantastic fighter; he is proving to be an excellent coach, able to communicate and translate his experiences in the ring to beginners and fighters of all levels.

With over 12 years of coaching experience, Liam now has one of the most in-demand seminars worldwide, travelling all over Europe and the US. Not all fighters make good coaches. However, this is something that Liam excels at.

Yokkao is a manufacturer of Muay Thai equipment based in Thailand. The Yokkao boxing gloves and shin guards are made in a traditional Muay Thai style, yet they feature unique, vibrant colour designs.

With Liam’s level as a fighter and his huge following, he has been one of Yokkaos ambassadors, promoting their products for many years.

Liam Harrison is a role model for UK Muay Thai and around the world. Also, with his eight world titles, it is without a doubt he will go down in history as one of the all-time greats. If you haven’t yet seen The Hitman in action, make sure to tune in to his next fight.