Home>Kickboxing and MMA news and equipment>Martial Arts Schools vs Fighter Gyms: What is Better? 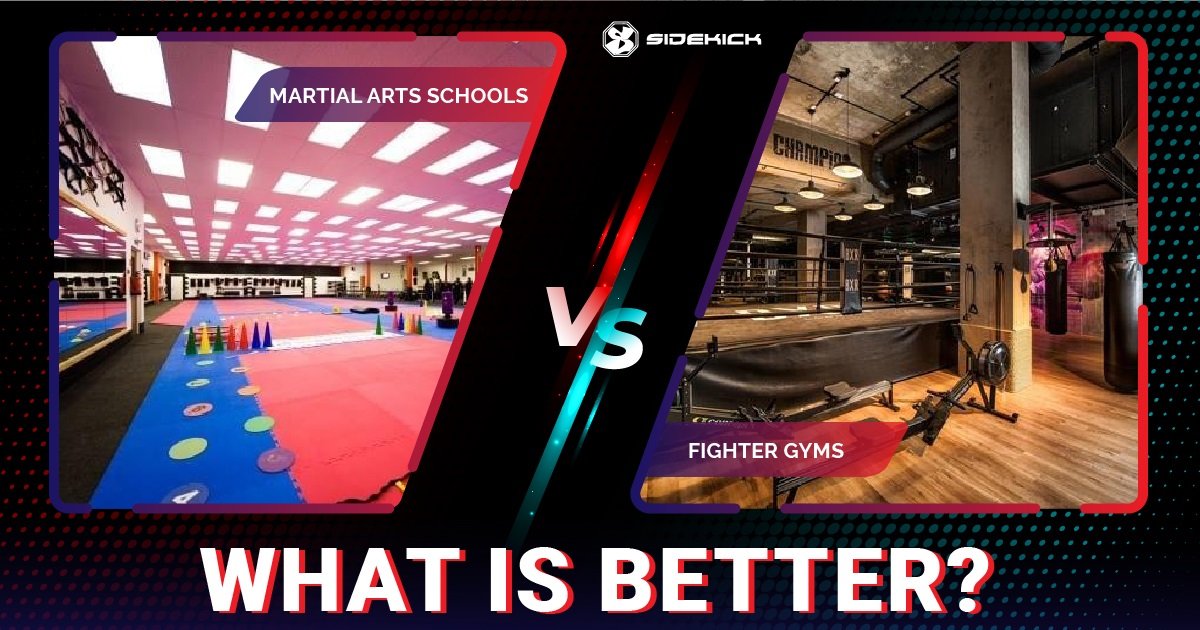 Martial Arts Schools vs Fighter Gyms: What is Better?

Even though martial arts should always be taught in a specific way, there is a massive difference between learning a martial art and becoming a hardened fighter. We all love watching action movies where the stars are taking everyone out with their spectacular martial art skills, but in reality, would that work in a real-life scenario.

What is the Difference Between a Fighter’s Gym and a Martial Arts School?

Many martial arts schools are based on the high-profit structure of a business, so they present their business professionally. They will have a fully equipped dojo that’s so clean everything would have looked untouched, and they will do plenty of quality marketing to attract a ton of customers.

‘Martial arts schools have the unique ability to provide self-defense training, character development programs for kids, and a family-like atmosphere for anyone in their communities. For someone looking for these benefits and wanting to get themselves or children involved, there are a few things to look for when searching for a school to try out. At a glance, most schools might look similar, but when you know what to look for, it’s easy to see the difference between schools.’

Whereas in a fighter gym, the coach wants to produce fighters; it is the heart of their passion. The club may be a bit of a spit-and-sawdust style, punch pads that have seen better days, punch bags that have been gaffer taped up, and with the gym’s tough reputable image, it may have limited numbers of members.

The cost of each lesson may be the same between both types of gyms. However, a martial arts school may require a student to pay for a licence, membership, insurance, monthly contract and all the necessary martial arts equipment when joining.

A fighters gym still will charge for a membership, but it may include insurance with it. They may also offer a pay-as-you-go type of membership so you pay only when you train, and they may ask for you to buy the gyms club t-shirt but allow you to buy your martial arts equipment elsewhere. So, both types of gyms may still cost about the same, and a contract monthly fees may work out more cost-effective if the student is training regularly.

Check out the video ‘What’s the Best Martial Arts Style or School for You?’ below for more information:

Which has the Best Training?

That all comes down to the level of the coach. Any type of club would be great for a beginner as they will all start with only the basic moves. When a student progresses, the training will get more advanced with sparring and gradings.

Lifehack.org suggests that: ‘What is more important is each school’s approach to teaching. Many martial arts schools teach only techniques that are specific to a traditional style. These schools follow the ways that the original founders of each style developed and they have continued with minimal variance over the years. Other studios like to borrow techniques from a variety of martial art disciplines and integrate a mix into their programs. These more non-traditional schools adopt a more open free-style system that incorporates both traditional and modern techniques.’

In essence, choosing the right environment for your individual style and where you want your martial art career to go is imperative to ensuring that your chosen martial arts school or gym is suitable for you and your needs.

The article above suggests that there are four main areas you should think about before choosing your place of training:

For more information, check out this article below: https://www.lifehack.org/articles/lifestyle/a-lifehack-on-how-to-choose-a-martial-arts-school.html

Sparring is one of the most important aspects of training in martial arts, not just as a fighter but to prepare for real-life situations. In Sparring, you will improve your skills and accuracy to strike effectively on a moving target. Also, Sparring will allow you to experience getting hit and block without panicking and flinching. In many martial arts schools, they may have a no-sparring or contact rule at the club. This is brilliant for the safety of the students and those who don’t want to get hit or hurt. However, if the student is only punching and kicking in the air or on pads, rather than practising their strikes and defending with a partner, their skills won’t be as effective against a trained fighter.

The school may focus more on the spiritual side of the martial art, respecting others and performing more of the flashy martial arts kicks. A fighters gym may insist when a student has reached a certain level or grade, they must start sparring to progress further. Students will spar and train with higher-ranked students and some gyms; everyone is beating each other up to prepare for combat.

This type of training is not everyone’s cup of tea, but it will make you tough and conditioned to fight.

In most martial arts, the gradings have always been a tradition as everyone wants to do it to aim to reach a black belt.

Some martial arts schools and academies have their own grading syllabus, which has more belts or ranks than a traditional martial art. These extra incorporated belts can be seen as both positive and negative. It’s great if the martial arts school has thoroughly broken down the art further to what they feel would benefit the student.

Also, having intermediate belts is an excellent incentive for the student to always gain a new belt. However, with the extra gradings, it can be seen as a bit of a money-spinner. Also, as many students stop training once they have gained their black belt, they will stay at the club for longer. In fighters gyms, they may stick to the traditional grades of the martial art, and if they teach a martial art like Muay Thai, they won’t have a grading syllabus.

Check out the video below for the 4 things you should think about before starting at a martial arts school:

Practicing in any martial arts has many values. Many admirable traits may gain, such as humility, self-discipline, gratitude, and courageously handling of fear, but depending on the individual goals, will determine whether to go to a traditional martial arts school or a fighters gym.

If you want to learn all the aspects of martial art, aim to achieve a black belt and are not keen on getting battered, then a martial arts school could be for you.

However, we highly recommend sparring and even the most non-fighting people soon find out they love it. So, if you want something more tough and challenging and see yourself as a competitive fighter, join an established fighters gym that has created many champions.

And who knows, one day you could even become a champion!