Home>Kickboxing and MMA news and equipment>Martyn Ford vs The Iranian Hulk: A Battle Of The Bodybuilders 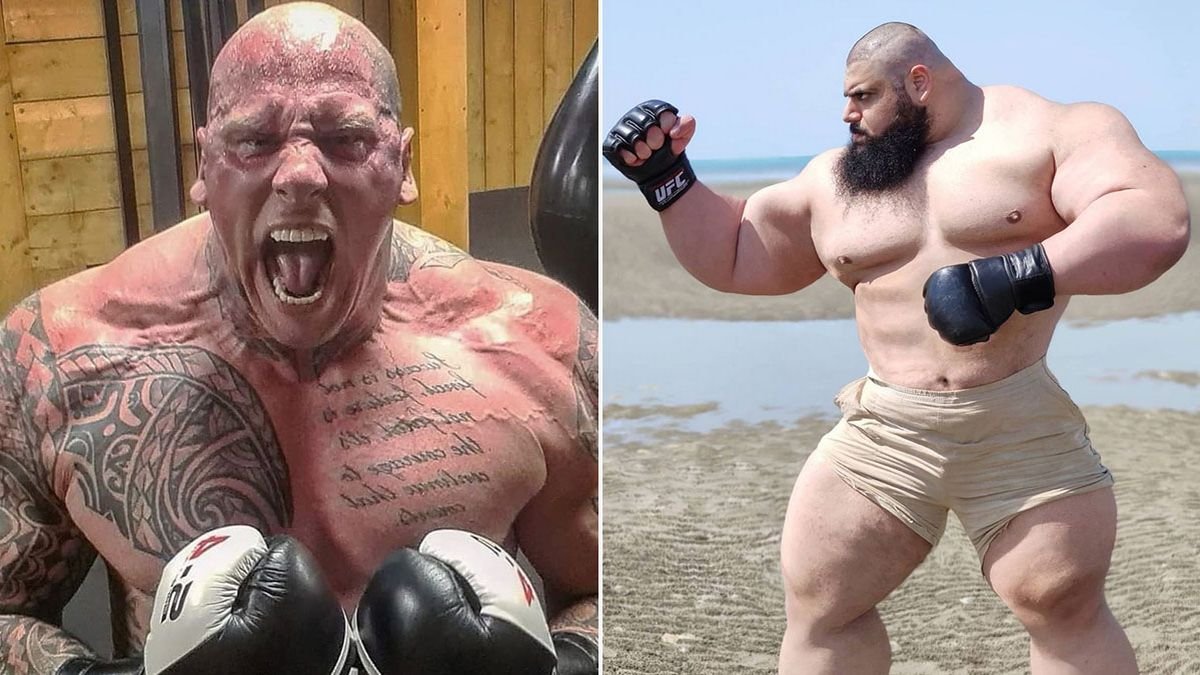 Martyn Ford vs The Iranian Hulk: A Battle Of The Bodybuilders

With the man who goes by the name of ‘the world’s scariest man’, the last thing you would want to do is upset him, let alone fight him.

You probably would rather fancy your chances against Freddy Krueger. Martyn Ford is known as the world’s scariest man and is stepping into the boxing ring to fight.

Is there someone crazy or brave enough to face him?

Funny enough, there is or was the Iranian Hulk, and he already could be having second thoughts. Let’s face it, who would want to fight a 6’8 beast?

Who is Martyn Ford?

Martyn Ford was born May 26 1982, and he grew up in Staffordshire, U.K. Starting out as a talented cricket player, Ford unfortunately succumbed to an injury which resulted in a severe case of glandular fever (infectious mononucleosis), which left him sidelined for around 12 months, ending his cricket career.

However, this started his love of fitness and bodybuilding. It helped to channel his frustrations that built up inside of him throughout the months he was unable to play cricket.

Although Martyn is humongous in size, he wasn’t always that big. In fact, as a youngster, before he found the passion for bodybuilding, he was quite literally half the size.

Ford explained: “I was lost when I finished playing cricket. I was convinced I would turn pro, which would be my life set out with injuries, bad luck, and losing love for the game that never happened.

But Martyn never filled the void. I knew deep down I needed to succeed at something, that I could shine in some way […]

I have always been so focused and committed with a crazy ambition to win. Fast forward to today, I’m travelling the world with fitness, made two films with three more already lined up. Not to mention three businesses to my name.”

As a result of this, Martyn Ford has had a very successful acting, modelling and fitness career starring in many great movies, including box office hits like The Kingsmen and Fast and Furious 9.

Due to his size and appearance, he plays a perfect ‘tough guy’.

“Think about what you don’t want to become. Negative reinforcement is a great tool to kick start the body into action! The fear of being a failure is almost like the ‘fight or flight’ that will either crush or push you!”

Alongside an extensive workout regime, Ford also eats like a pro. He consumes up to 8,000 calories daily and eats 6-7 times per day consisting of high carbs and protein..

Why is Martyn Ford boxing?

It could be he wanted a bit of the boxing limelight after seeing a fellow bodybuilder; the beast give it a go.

However, he did take interest in MMA (mixed martial arts) and he was signed to KSW in 2018. Martyn has had previous experience with training but has never fought before. He was set to fight the Iranian Hulk this month, but it has been postponed.

Who is the Iranian Hulk?

Sajad Gharibi, also known as the Iranian Hulk, is also a bodybuilder and has drawn a lot of attention online from the boxing fight.

You may think with the fame of Martyn, it would simply be a case for the promoter of finding a suitable opponent so the fight can generate enough interest.

However, that is not all the case as Sajad has not only a monster physique but also has a massive following with over a million fans of his own. He stands at six feet two inches and weighs around 390lbs.

For ‘reasons out of his control’ the fighter was unfortunately cancelled. Martyn Ford is understandably upset about this after putting in so much work into preparing for this fight against his rival.

On Instagram he said “ “Today I heard Ford doesn’t want to fight, it is not me [and] not any other fighters,”

“I never cancelled any fight between us but he doesn’t want see me again! It is against the contract and my legal team have started looking at it.

“Actually ‘pretty boy’ can’t ever fight, he just hides and runs away, he must have a permission from a woman first.

“I can’t believe an opponent like him, it’s shameful. This victory isn’t an honour for me, it’s a century joke not a century fight.”

Both Martyn and Sajad have a huge following due to their successful careers as bodybuilders and a fight between them gains huge publicity. However, bodybuilding is one thing, and boxing is another, that these exhibition fights sometimes don’t quite live up to any expectation.