Home>Kickboxing and MMA news and equipment>Mayweather vs McGregor 2.0: Do we Really Need it? 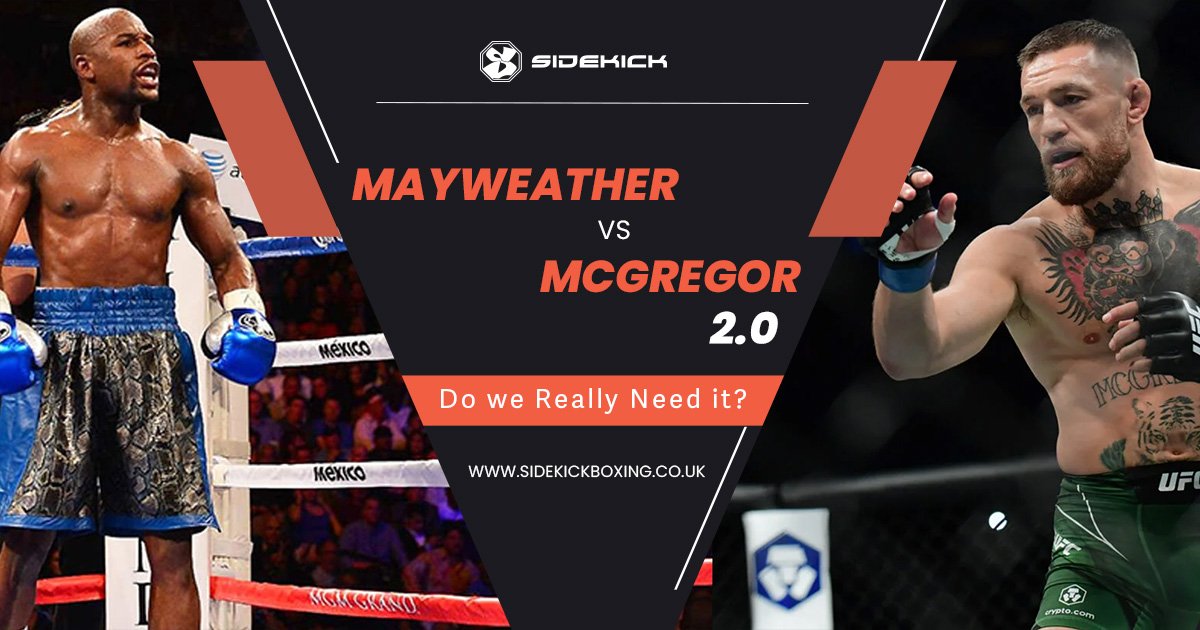 Boxing vs MMA, Mayweather vs McGregor

We all remember the Mayweather vs McGregor boxing fight back in 2017. Don’t get us wrong, the hype, the build-up, and the fact that it was an MMA fighter against a boxer intrigued us.

But in reality, the fight flopped.

It was a credit to McGregor as he held his own against the pound-for-pound Mayweather, and if the referee didn’t stop it, he probably could have lasted the distance. And considering Mayweather is the ‘defence king’, McGregor managed to land some good shots on him.

The bout took place on August 26, 2017, at the light-middleweight limit, at T-Mobile Arena in Paradise, Nevada (154 lbs; 69.9 kg). Twelve rounds were scheduled, and it had the second-highest pay-per-view buy rate ever.

The fight between Mayweather and McGregor was highly entertaining, with McGregor holding his own. However, it seemed as though Mayweather could have ended the fight at any time, and he did so in the 10th round, winning through technical knockout.

After that victory, Mayweather retired with a 50-0. Although Mayweather hasn’t fought since, he has participated in three exhibition matches against Tenshin Nasukawa, Logan Paul, and Don Moore.

Mayweather vs McGregor: The Money Fight 2017

The bout was predicted to attract more wagers than any previous boxing event, with estimations of up to $85 million. The public placed six individual $1 million bets on Mayweather at Las Vegas bookmakers, but the vast bulk of wagers was placed on McGregor, the underdog.

Read our article ‘Is betting good or bad for boxing?’ here.

Profits from the Fight

Sky Sports initially estimated the fight garnered over a million PPV buys in the UK and grossed over £20 million, which would’ve surpassed the record set in April 2017 when Anthony Joshua defeated Wladimir Klitschko in front of 90,000 at the Wembley Stadium. This would’ve also meant the fight generated more buys in the UK than Mayweather-Pacquiao, which took place in 2015. Figures later revealed by the Broadcasters’ Audience Research Board showed the Mayweather–McGregor fight drew 874,000 PPV buys in the UK.

Rematch negotiations between Floyd Mayweather and Conor McGregor are ongoing.
When the Irishman’s professional boxing debut was stopped in the 10th round in 2017, McGregor was defeated by boxing superstar Mayweather. Before retiring, Mayweather improved his perfect record to 50-0.

However, according to FightHype, the boxing icon and McGregor are in negotiations for a match that would net him over $100 million. The outlet and the former “pound-for-pound” fighter are reported to be close.

Why Mayweather vs McGregor 2.0: My Opinion

What will be different? It is simply for money. With both getting that bit older and slower, it is doubtful it will be any whirlwind. They are both great but their not at their peak.
McGregor was always exciting in MMA for his explosive knockouts. He dropped Jose Aldo in just 13 seconds in the UFC 194 back in 2015.

Watch the knockout in the video below:

But boxing gloves are different to MMA gloves, which we have spoken about here.

Mayweather has a granite chin; even if a big punch lands, he will likely shrug it off. Also, as Mayweather is a counterattacker, he won’t be at risk moving in looking for that knockout.

So, the rematch other than their names has little to offer for excitement. They might make out the hatred is there, but as soon as it’s over, knowing what they have just earned will walk away very happy. Not unless Mayweather does get knocked out.

Will Everyone Watch it?

Yes. It gets us every time; we moan about it for months on end, debate and predict what will happen, and then when fight time comes, we tune in at 4 am.

White responded to a TMZ Sports question regarding McGregor and Mayweather possibly rematching their 2017 fight: “I have less than zero interest in seeing that again.”

Although McGregor’s return date is still unknown, White sounded confident that the former UFC two-division champion would return to the octagon rather than the ring.

“It’ll be in the cage,” White said. “Conor is looking to come back at the end of this year, early next year.”

Ever since he injured his leg in his injury TKO defeat to Dustin Poirier in their trilogy at UFC 264 about a year ago, McGregor’s UFC career has been put on hiatus. McGregor has been posting footage of his workouts to social media for the majority of 2022; it wasn’t until earlier this month that he was finally spotted kicking for the first time since fracturing his leg.