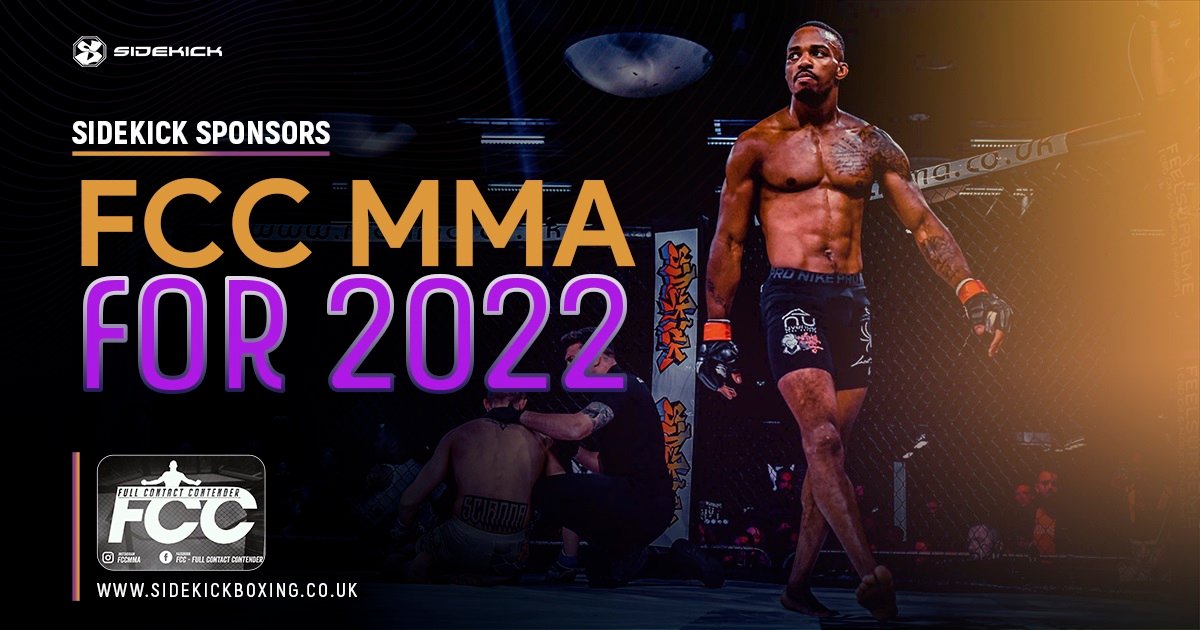 Sidekick have just signed a lucrative sponsorship deal with one of the biggest MMA fighting promotions in the UK for 2022, the FCC. Back in 2010, Sidekick solely launched as a kickboxing equipment company, it solidified its name in the industry.

However, as kickboxing is a sport which falls in under the MMA umbrella, it was only a matter of time before the fast-growing brand expanded in to the world of MMA and was producing equipment and sponsoring the leading MMA fighting promotions.

Also, this isn’t the first time that Sidekick and Full Contact Contenders (FCC) have collaborated, as FCC have been responsible for help putting Sidekick on the MMA map since FCC 5 in 2013.

FCC is the UK’s fastest-rising MMA fighting promotion based in Bury, England. The promotion was launched in 2011 by founder Adam Teh who has worked alongside sister Lauren and their parents to grow the brand they have today. FCC originally launched as an amateur MMA fighting promotion to compete, while delivering all the glitz, glamour and atmosphere of a big professional MMA show.

Yet today, with over a decade of promoting and 26 events under their belt, FCC has become a leading promotion for both amatuer and professional fights. They provide a no-expense spared extravagant fighting promotion which is a great platform which fighters want to be seen on.

Daniel Knight, the owner of Sidekick Boxing came from only a kickboxing background, that he wasn’t to familiar with MMA. However, in the 2010’s there was a huge spike in UKMMA and with many new fighting promotions starting, they were doing a mix of MMA and K-1 kickboxing themed events that Daniel almost fell In to the sport.

Both formats of fighting almost went in hand in hand as they both had similar amount of rounds and looked good together. So Daniel thought it would be great to cover all styles of fighting equipment and decided to invest in MMA too. As Sidekick was already producing equipment for kickboxing they would only need to add a numerous of extra products to the collection to become a full mixed martial arts equipment company.

Sidekick was already sponsoring some of the biggest names in kickboxing, so to invest in MMA, they wanted to be established at an equal level. There was plenty of shows around the country, but many of them didn’t tick all the boxes Sidekick was looking for, until they came across FCC.

FCC were making waves all over the Internet and you couldn’t miss them, their show just looked a cut above the rest. FCC looked so professionally from the set up of the venue to all the media promoted online, that Sidekick wanted to be a part of it.

Sidekick are now proud to have sponsored various of the FCC fight nights since their early days and even one show with UFC star’s Lerone Murphy and Paddy Pimblett fighting on their card. Now, the MMA fans can expect to see the Sidekick logo in the cage even more as the duo have just agreed an ongoing partnership for 2022. Two of the biggest names in MMA, FCC and Sidekick have collaborated.

“This was an opportunity we wasn’t going to miss out on. Adam and the team are so friendly and their show is so professionally it only made perfect sense to sponsor FCC. Even though originally we were in the kickboxing scene, you couldn’t not know who FCC was, they were everywhere on social media. It is certainly one of the reasons we got so established in MMA ourselves. Considering they claimed to be an amateur fighters promotions, the quality of the show is better than anything else going. We couldn’t be more excited to be back”

Who are the best fighters who have fought on FCC?

When is the next FCC?

FCC 27 is the next action packed show of MMA fighting. It is on Sunday 19th December 2021. So get your tickets today and have a fantastic Christmas party you will remember.

To learn more about MMA fighting read our article ‘What is Cage Fighting and is it considered dangerous?’ here.