Home>Kickboxing and MMA news and equipment>Tommy Fury: From Love Island To Professional Boxer 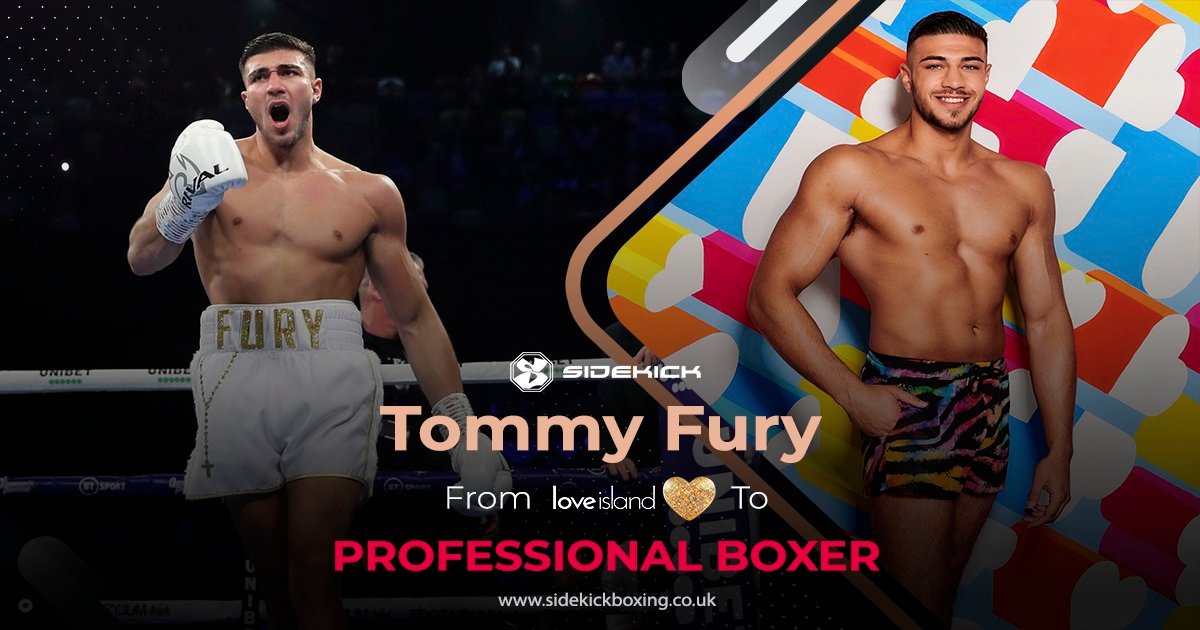 If you have always been into boxing, you probably would have always known who Tommy Fury is, even before he went into the ITV series Love Island in 2019.

After leaving the villa with Molly-Mae, they came out as very famous celebrities and huge influencers, but isn’t he a professional boxer?

Check out this video below of Tommy and Molly-Mae in the villa:

Who is Tommy Fury?

Tommy Fury, also known as TNT was born in Manchester in 1999 and is a professional boxer who fights in the light heavyweight division. The weight category for a light heavyweight is between 168 pounds (76 kg) and up to 175 pounds (79 kilograms), falling between super middleweight and cruiserweight.

Tommy is the younger half-brother to the heavyweight boxing champion, the Gypsy King, Tyson Fury. As Tommy grew up in the Fury family, boxing was always going to be a part of his life.

Still, when he got the opportunity to enter the Love Island villa, he took a bit of time out of boxing and had a slight change of path, and Tommy probably thought being on TV would also help his boxing career in the future.

Tommy said about getting back into boxing: ‘It is good to be back after Love Island and life is good. I feel at home when I’m in the squared circle. Fame is one thing, but it is how you cope with it. You can let it go to your head and run around thinking you’re too good for everybody. But, you are the same as everybody. It’s just that a few more people want to take your picture or get a signature. I am still the same man as I was before Love Island – the same lad who was boxing on the Josh Warrington-Carl Frampton undercard.’

It may appear boxers earn a fortune, especially when you see the likes of Floyd Mayweather, Tyson Fury and Anthony Joshua living the high-life, but boxing is not as glamorous as it seems.

For most professional boxers in their early fights, a fighter will generally fight out of sports halls and earn only a few hundred pounds per fight until they make it to the top.

However, for Tommy, when he turned pro, he already was fighting on top promotions and had the fans interested to watch him fight to see if the expectations lived up to the Fury name.

Before he went into Love Island, Tommy only had two professional fights, so his boxing career was still relatively early days, and going in to the Love Island villa would have put his boxing career on hold for a while. That was a big decision, considering they are entirely different lifestyles.

From the minute he stepped into the villa, Tommy showed the nation what a lovely and great guy he is, mainly as he lived with other men in the villa, he could of felt he needed to be the alpha male. Tommy hit it off from the start with Love Islander Molly-Mae, and they fell head over heels in love with each other. He also became best friends with Curtis Pritchard.

Despite being one of the strongest couples on the show, Molly-Mae and Tommy didn’t win the 2019 series, instead finishing second place behind Greg O’Shea and Amber Gill.

Even though Tommy had massive success in the villa, and it boosted his profile, his brother Tyson was never over-impressed with his younger brother going into the villa.

Coming from a fighting traveller family, they earned their name from boxing, not reality TV shows and sunning it up around a pool is different from heavy sparring in a spit-and-sawdust style gym.

After the show, his brother insisted that he got back into the gym rather than make his money from celebrity guest appearances and promotional work.

Tyson did have a valid point because if his heart was to be a world champion boxer, their careers only have a short window, so he would need to knuckle down and be hungry for it, and celebrity promotional work will only last so long before it fades out.

‘“Just watching him throughout the whole build up, all his training, the all access programmes on Showtime and BT Sport, words can’t describe how much of a motivation he is to me.

“He’s my favourite fighter and in my opinion the best heavyweight there has ever been and he’s my brother, so much of my motivation comes from him.

“If he can conquer all what he has done, then I can conquer anything and it’s the same to everybody out there, whatever you want to achieve in life you can achieve it. My motivation is sky high and I couldn’t be any prouder than my brother.”

Instead of hitting the gym, Tommy didn’t take the advice from his older brother, and he joined up with fellow Love Island star Curtis Pritchard and filmed their reality TV series, ”The boxer and the ballroom dancer”.

They both had to live each other’s lives, so Tommy had to train in ballroom dancing and compete at the end. Molly Mae was also making the most of the lime-light and was doing lots of advertising for big corporate companies like Pretty Little Thing and has now gained a social following of over 5.8 million.

That is nearly 1.5 million more fans than Tyson Fury.

Tommy said: ‘Just 12 months ago, I had 3000 followers and only known in my local kebab shop. Now I’m pushing on for three million followers. I’m still the little boy who grew up in Salford. I don’t think I am too good for anybody.’

How good is Tommy Fury at boxing?

Anyone who is part of the Fury family will know a thing or two about boxing. Tyson being the eldest sibling, has certainly handed down his knowledge. However, Tyson has total natural ability, and although it is still early days for Tommy, it hasn’t yet got that flair of Tyson.

He has had only a handful of fights, and they haven’t been anything of a challenging opponent. Now, he has already had the fame from Love Island, the spotlight is on him to do well, so whoever he fights, he is in a bit of a no-win situation.

As with any professional boxer, they fight their way up through the ranks, fighting relatively equal opponents, and they certainly wouldn’t be making headlines. However, for Tommy being a celebrity, his fights get hyped up to draw in as most attention to his fight as possible.

The issue is with the promoters trying to promote Tommy as much as possible. Finding the right opponent to give him a credible fight, yet not too good that he gets outclassed which can ruin his chances of going for a title.

Tommy has had a slightly gifted career so far as he has had six professional fights with six wins, 4 of which by knockout and his opponents have a total combined record of 14 wins and 174 losses, with three opponents who have never won.

So, it is clear that as much as Tommy is a talented boxer, any boxer could look great in the ring against poorly matched opponents. He has also had a feud with the Youtuber superstar Jake Paul offering him a boxing match.

Even though Tommy is the more experienced boxer, Jake Paul claims that his social profile is not good enough to fight him. Now Tommy has had experience as a professional boxer, It is the ideal time to get opponents that would test his skills.

Tommy Fury has welcomed a fight against YouTuber Jake Paul after sealing the sixth victory in his professional career. Asked about the Jake Paul fight, Fury told BT Sport: “Whenever, come and get it!”

Fury is in line to make his American debut as he is set to be included on the undercard for Jake Paul’s fight against Tyron Woodley.

Check out the video below for more information about this upcoming fight:

Could Tommy be a light heavyweight champion?

Tommy has got the skills, endurance and physical strengths for a prospect champion. However, the light heavyweight division has many great champions with more fights under their belt. As Tommy didn’t have the most significant amateur record, it would take a lot of preparation to beat them.

Anthony Yarde is probably one of the best ranked British fighters in the light heavyweight division, and Tommy Fury has mentioned in the past that he would like that fight. That would be an excellent test for Tommy. Before fighting for a world title, a shot at the British title with the current champion Craig Richards would be amazing to see Tommy fight.

Tommy Fury is only 22, so he still has at least 13 years as an active professional boxer. He also has the skills and a great team around him to one day make a great champion.

With not only the fame he received from being part of Love Island, but also his personal character, skill level and famous brotherly connections, Tommy Fury definitely has a great chance of becoming a boxing champion with a little bit of hard work and dedication to the sport.