Home>Kickboxing and MMA news and equipment>Tommy Fury vs Jake Paul: Is Fury Going To Need A Deed Poll? 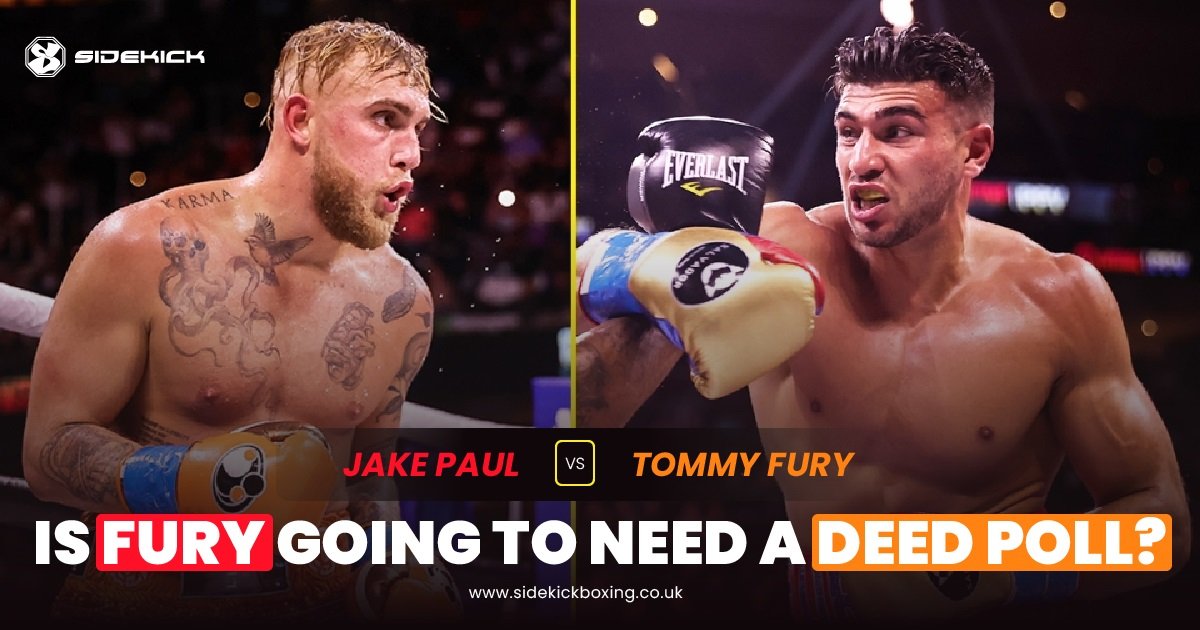 Tommy Fury vs Jake Paul: Is Fury Going To Need A Deed Poll?

Tommy Fury and Jake Paul have become the biggest rivals in boxing for many years, and now, the fight is finally on. The Fury vs Paul boxing fight is all set for this December, and it isn’t any ordinary boxing fight either, as Jake Paul has added some bizarre terms to the contract.

Since Fury left the Love Island Villa in 2019, he has been looking for the perfect boxing opponents to boost his profile and earn large sums of money. Jake Paul ticked all the boxes for Fury, as he is relatively new to boxing, yet he is a global YouTube sensation with over 20 million followers. A fight with Jake Paul would be a huge selling fight and a chance for Fury to show his talents to the world, as his boxing career is still in the early days itself.

Fury and Paul have had their ongoing trash-talking about each other, and it has started to get personal, as Jake Paul has suggested Tommy’s girlfriend Molly-Mae had sent him private messages to get under his skin. They both have said how they would easily beat the other up in a boxing match, with many fans favouring Fury to win.

It seems many boxing fans would rather Fury win as he is regarded as the more professional boxer, and people can’t look past Jake Paul doing silly YouTube videos, claiming boxing shouldn’t have these YouTube fights. Yet, the controversy in this fight has made it one of the most talked-about fights on social media, and not for the good of the sport either.

It’s not about who is the best boxer in the world, as they both have a world rank in the hundreds. We have all been brought into their feud.

So, who is Jake Paul?

Jake Paul is an American Youtube star with over 20 million followers, and he has now entered the world of boxing. Brother to Logan Paul, who fought boxing legend Floyd Mayweather, in an exhibition boxing bout.

Who is Tommy Fury?

Tommy Fury is the younger half brother to the WBC heavyweight champion Tyson Fury. Boxing has always been in his roots but is better known to many for his appearance in Love Island. Please read our article ‘Tommy Fury: From Love Island to professional boxer’ here.

Jake Paul vs Tommy Fury: Who is the Better Boxer?

Jake gets regarded as by many ‘just a Youtuber’.However, he is making waves in the boxing world, and he has rustled a few feathers with some of the biggest stars in combat sports, including the notorious Conor McGregor.

It is a credit to Jake Paul, the YouTube star who has picked one of the toughest sports to get involved in, and despite the criticism he receives, Jake Paul has never lost. Also, for someone who is a later comer to the sport, he challenges some of the biggest names in boxing.

However, does he have what it takes to beat someone as credible as Tommy Fury, or is he mad?

Jake is taking boxing seriously, and he is putting in the hours in the gym. Of course, there are flaws, but his confidence is through the roof, which will make him a tough opponent to break down.

Tommy, on the other hand, with a surname like Fury and a brother as a world champion, you would expect him to box perfectly, and an opponent like Jake Paul should be a walk in the park.

But does Tommy Fury Live up to the Fury Name?

Surprisingly enough, Tommy Fury has still a lot to prove in the traditional family sport of boxing. Tommy Fury is in great physical shape, and his boxing looks on point, especially in training, but he still hasn’t gone up against a credible opponent. In his seven professional fights, his opponents have 175 collective losses on their record, and as Jake Paul is undefeated, it makes him his biggest test to date.

In our opinion, if you compare the previous fights of both guys, Jake Paul looks more relaxed, utilizing the ring more effectively. He even looks the more confident of a fighter (don’t shoot us down for that). Whereas, it appears Tommy tries too hard to impress, looking for a spectacular knockout to get his opponent out of there. Also, he hasn’t quite got the flare of his brother Tyson.

Tommy Fury’s last opponent Anthony Taylor, which was his second professional fight, is also a friend to Jake Paul and said to Vegas insider: “Jake is twice as good as Tommy. Tommy only has that long reach. You take that long reach away, and he becomes a mediocre fighter. Tommy is green; Tommy’s not anywhere near Jake’s level.”

In reality, Tommy Fury comes from a fighting family and with his pedigree in boxing, since turning pro, he should have already fought high ranked fighters and progressively worked his way up the ranks. Fury is currently ranked no. 266 in the light heavyweight division. After he came out of Love Island, Tyson claimed his brother needed to get back to training if he wanted a successful career as a boxer, but Tommy wanted to cash in on the PR work.

It is understandable to earn as much as you can while in the limelight, but it questions how much Tommy Fury wants to be a boxer or a champion. There is one thing for sure, Jake Paul is hungry for it, and with over 20 million fans, he doesn’t need fame or fortune.

However, this fight pans out; with both fighters following, it will be a sell-out.

Check out this side-by-side video comparison of Fury vs Paul:

Tommy Fury vs Jake Paul: Who Will Win?

Being a boxer for a longer time and the pedigree he has, you would expect Tommy Fury to win on paper (as they say in Love Island). However, there probably is more pressure on Tommy to win, especially as his brother said he should never box again if he loses. As we know, the biggest upsets in boxing do happen, and we can see it going either way.

Fury even skipped the official face-off against Paul due to a family emergency. The Mirror suggests that:

‘Tommy Fury has returned to the United Kingdom just weeks out from his fight with Jake Paul, skipping the pair’s launch press conference.

The Love Island star was set to face off with the YouTuber for the first time since August, and is expected to be back soon, but cited a “family emergency” for missing the press conference.

Paul claimed that it was an issue with his mother Chantal, but no official reason has been confirmed.’

This is Tommy Fury’s chance of proving himself to the biggest audience yet. But If Jake Paul wins, it won’t leave much of an optimistic future for Tommy in boxing. There would likely be a rematch clause in the contract, so if Jake wins, he will get another chance, but it won’t look promising for him to be a world champion.

It is suggested that when Jake Paul fought Woodley, there was a no knockout clause so that Woodley couldn’t knock him out.

The Mirror suggests that:

‘Speaking with media after the launch press conference for his upcoming bout with Tommy Fury, Paul brushed off the claims, admitting that he done it, he would be “in jail”.

“It’s a bunch of losers trying to make s*** up,” Paul said. “They want to get into headlines and get reporters to ask them about that exact question and put their name into the mix so that they can get a little bit of clout.’

Now, Tommy Fury’s dad has said there are crazy terms in the contract, that Tommy will have to change his name to Tommy Fumbles if he loses. Fury definitely can’t afford to lose as that will be humiliating enough itself.

It doesn’t matter how long you have done something for; it’s how much you do it for what counts. So, even though Tommy Fury has had a lifetime of boxing, if Jake Paul dedicates all his time to training, he certainly has a good chance of winning. We will see!