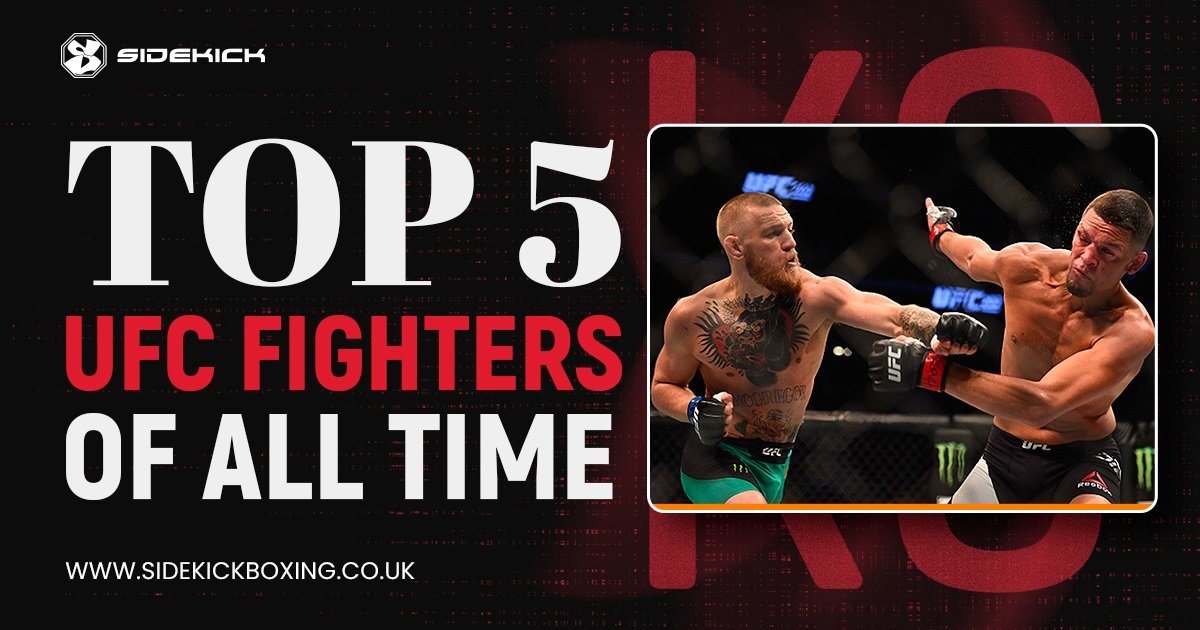 Top 5 UFC Fighters Of All Time (Not The Typical Picks)

Since the dawn of time, the human race has been renowned for its fascination with the art of organised combat. From the astonishing coliseum battles of the roman empire, to the modern-day televised battles spread across hundreds of organisations across the globe. One of the most notable being the Ultimate fighting championship (UFC).

Since the organisation’s establishment back in 1993, the UFC has played host to the world’s finest practitioners the combat sports industry has ever had the pleasure of witnessing. It is plain for all to see why it is the dream of many up-and-coming amateurs, as well as well-rounded professionals to one day take the walk to what will be the biggest stage of them all.

Many have earned the right to get the opportunity to make their dreams come true. And so many who built the very foundations which have made the brutal yet exhilarating world of the UFC a household name.

Conor ‘The Notorious’ McGregor, BJ ‘The Prodigy’ Penn, Michael ‘The Count’ Bisping, Ken ‘The World’s Most Dangerous Man’ Shamrock and many more have worked from the ground up to take centre stage on the entertaining and brutal platform in MMA history.

If you were to gather some of the world’s most experienced professionals in one room to decide who (out of so many) are the finest individuals to have ever made this walk, old age would most likely never see them exit.

The best we can do is have our own opinions out of so many we have witnessed live or over the screen.

We have teamed up with Aaron East from MMAUK to give you our personal verdict on the top 5 Male competitors we’ve witnessed showcase their prolific arsenals on the grandest stage of them all.

First appearing at UFC 4 back in 1994, Dan made sure his debut was one fans would not soon forget. Fighting not once, not twice, but 3 times on that fateful night in Oklahoma. he battled his way through Anthony ‘Mad Dog’ Macias and Marcus ‘The Grasshopper’ Bossett to secure his place in the finale against Royce Gracie in the exhilarating Grand prix.

The hall of famer truly has God like status in the Octagon, he will forever be held as one of the most explosive warriors ever to grace the Octagon, and one of my personal favourites.

The Heavyweight division has always given fight fans some controversial and unmissable moments in all aspects of combat sports. But there are few that can boast the volatile KO power Derrick Lewis possesses. Making his debut for the UFC back in 2014, Derrick made his intentions known by deconstruction of Jack ‘The Outlaw’ may within the very first round.

He later went on to stacking up victories over the best the division had to offer. Curtis ‘Razor’ Blaydes, Roy ‘Big Country’ Nelson, Alexander Volkov and even current UFC Heavyweight champion Francis N’Gannou have all fell short across the cage from him. When thinking of the current roster, the holder of the most KOs in UFC history will always hold a top spot in my opinion. Many would agree why Lewis will forever be one of my top picks of the Heavyweight division ever to compete for the UFC.

When thinking of some of the most controversial warriors to enter the proverbial Lion’s den, Nick ‘Diablo’ Diaz will forever hold a top spot for me. A Brazilian Jiu-Jitsu black belt under Cesar Gracie, Diaz has one of the most polished grappling games the welterweight division has ever seen.

Before the antics of Conor ‘The Notorious’ McGregor, one of the most gifted professionals ever to have excelled into the art of getting into his opponent’s head, we had Nick Diaz. Whose memorable moments of total disregard to the rules have put the entertainment factor inside the cage since making his debut back at UFC 44 Undisputed Ortiz vs Couture in Las Vegas Nevada in 2003.

One of the most stand out moments was when one half of the Diaz brothers took on 2021 Hall of Fame inductee and UFC legend Georges ‘Rush’ St. Pierre. Nick took a lengthy absence from competitive action back in 2015 after being banned from competitive action and fined $165,000 after failing a drugs test with the Nevada State Athletic Commission.

Many, including myself, lived in hope that once the suspension was lifted, we would bear witness to one of the modern-day UFC greats competitive presents once again. Those who hoped got their wish back in October 2021, UFC 266: Volkanovski vs. Ortega. But the return to what was a rematch 17 years in the making, was not as successful as some would have hoped. Despite a valiant effort throughout 2 rounds, falling to return to his feet 44 seconds of the 3rd round to Robbie ‘Ruthless’ Lawler.

No one can deny that after such a lengthy absence, his pure unbridled willingness to compete once again was an admirable feat despite this loss to one of the most prolific strikers active on the UFC roster. This is one of many reasons why he is one of my all-time favourite mixed martial artists to have competed in the Octagon.

The Vikings were among the greatest warriors of the ancient time. They were true artists of violence and they could showcase these talent’s pretty much anywhere they laid their hand. Alexander gustafsson is a true precedent of a modern-day version of the Scandinavian historic warriors.

Gifted with an exceptional reach advantage and submissive prowess, Alexander has given the fans of the UFC some exciting and memorable moments since taking his first walk down to the Octagon back in 2009. Most memorably his all-out Main-Event wars with John ‘Bones’ Jones at UFC 165 in 2013 and UFC 232 in 2018.

If ever there was a trilogy the fight fans deserve, it’s to once again witness the phenomenal meeting of these two UFC greats. ‘The Mauler’ returns to battle set to face Nikita Krylov at UFC London later on this month.

Carpenters are skilled artisans who construct, install and renovate structures, or in Clay Guida’s case deconstruct. His professional debut nearly 20 years ago in the summer of 2003, formerly competing for Strikeforce, the WEC, King of the Cage, and Shooto. Guida was the inaugural Strikeforce Lightweight Champion.

Guida has been showcasing his array of talents on the UFC roster since 2006 when he made his successful debut against Justin ‘Pretty Boy’ James at UFC 64 Unstoppable. His most notable victories have been against UFC greats such as Nate Diaz, Anthony ‘Showtime’ Pettis, Joe ‘J-Lau’ Lauzon and 2015 Hall of Fame inductee BJ ‘The Prodigy’ Penn.

At 40 years of age, Guida is now one of the eldest on the roster to still be competing. But do not let his age fool you, he has kept himself in prime condition making sure to keep himself active and fight ready. An example of this is most recently successfully competing at Fury Pro Grappling 4 in Philadelphia. This is some of the many reasons why he shall forever remain as one of my all-time favourites to ever step foot inside the Octagon.

The collisions that have taken place, the blood that has been spilled across each and every inch of the octagon by these remarkable athletes, is proof enough that the UFC is the absolute apitimy of mixed martial arts competition. countless hours of Cage time, hundreds of thousands of hours carefully sharpening the proverbial tools for war.

These explosive competitors have dedicated their lives and put their very existence on the line time and time again to prove that the human body is capable of extraordinary feats. This is why I believe this is the most exciting and explosive sport in the world.

There isn’t a single arena the UFC can’t fill. 29 years of pure unadulterated organised violence has given fans of the brutal yet exhilarating world of mixed martial arts many high-level highlight reel moments that will forever be intended in memory for many years to come.

And with so many more high-level fighters entering the ranks, and many more waiting in the amateurs ready to prove their metal, aiming for the UFC. I’m safe in the Knowledge that we have so much more to come when looking towards the future of this high paced, action-packed and brutally entertaining world of Mixed Martial Arts.

These 5 choices are but a drop in the ocean of the many great athletes that have taken the walk to the Ultimate fighting championship. We’d be happy to hear your picks/memories drop us a comment, and help secure this explosive organisation to be the talking point for future generations.