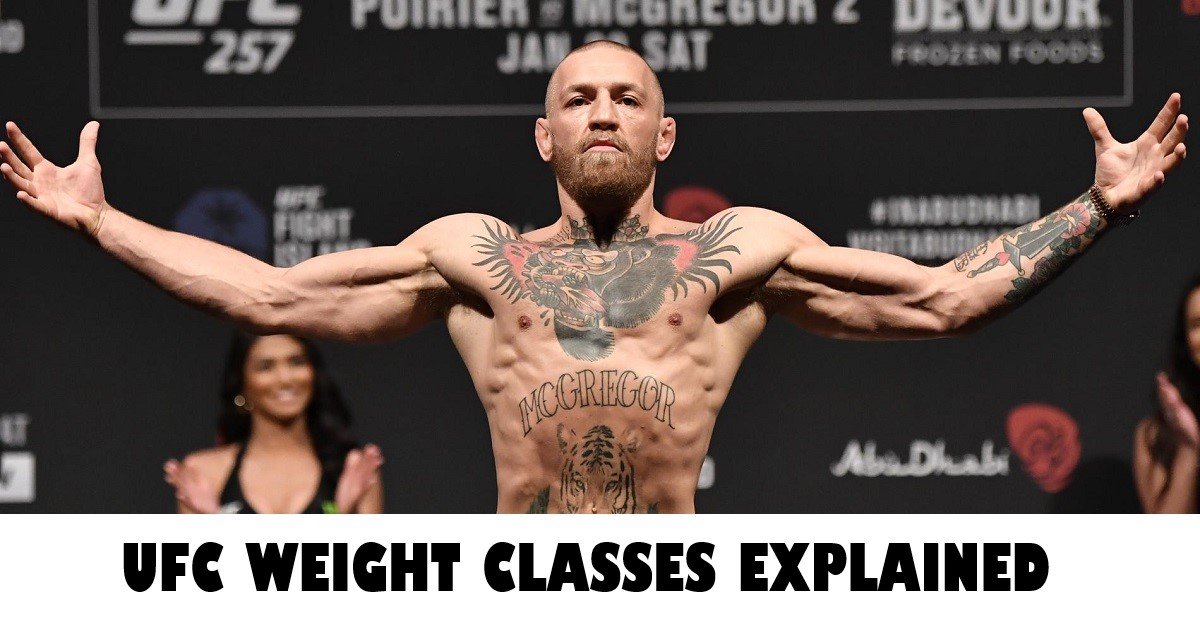 As with any combat sport, fighters compete against each other in a specific weight class. Because let’s face it, it would be a little unfair for a lightweight to fight against a heavyweight.

A heavier fighter will be bigger, stronger, and chances are, have a more extended reach, so fighters cut or gain weight effectively to suit a particular division. Read our article about ‘Why do fighters cut weight?’ here.

The UFC being American they have the weight divisions in-lbs.

What are the UFC weight classes?

In the UFC, there are 12 weight classes, 8 for men and 4 for women. The men’s start with a flyweight with a maximum weight of 125 lb up to 265 lb in the heavyweight division. The women’s division has 3 of the lower classes as the men, but they have an extra lower weight of the strawweight.

The strawweight has a max weight of 115 lb up to 145lb max to the featherweight division. To give you an idea, 140 lb is ten stone. As the UFC is an independent promotion, they have their own weight classes. They may have the same weight names as in boxing, but the weights themselves are different.

For instance, the middleweight division in the UFC is between 171 lb to 185 lb, and in boxing, the middleweight is between 155 lb – 160 lb. Also, as there are fewer weight classes in the UFC than boxing, there is a wider weight gap in each division that has an approximate 15 lb weight difference between the lightest and heaviest in the same class.

Whereas in boxing, fighters will be closer together in weight. Not only that but there are more minor champions too. As the UFC is an American organisation, they use imperial measurements. In contrast, other promotions may have their weight classes in the metric system and use KG instead of lbs.

Why does the UFC have Weight Divisions?

‘Having weight classes add more legitimacy to the sport. Weight is also a huge advantage in a fight. More weight classes also allows the promotion to put on more title fights, which makes the UFC more revenue in PPV points.’

What if a fighter doesn’t make the UFC weigh-in?

If a fighter doesn’t make the weight, the other opponent gets the right to accept or refuse to fight as it is not in the agreed weight class. In most cases, the fight still goes ahead. Otherwise, the opponent would put months of training to then cancel it.

The fighter who misses the weight is usually fined 20% of their purse. – If it is a title fight, it will still usually go ahead, but it will become a non-title match. If the champion does not make weight, the fighter would likely strip them of their title.

‘If a fighter ‘misses weight’ for a title matchup, then they will not be eligible to win the UFC belt being fought over (even if they win the fight).

What are the Best Paid Weight Divisions in the UFC?

The UFC’s heavyweight division has always been, and continues to be, one of the most popular divisions in the UFC (just like in boxing). This is probably because seeing the largest fighters knocking each other out is always an exciting watch for both followers of the UFC and general viewers too.

Check out the top 25 knockouts from the UFC in 2021 below to get a taste of some of the excitement viewers get from watching:

The UFC’s 265-pound heavyweight division also features some of the UFC’s major stars such as WWE superstar Brock Lesnar. From his time at the UFC, Brock has made at least $5.1 million from those bouts.

‘Even less popular heavyweight fighters can make a lot of money in the division. For example, The Sports Daily says that Francis Ngannou made at least $300,000 for knocking out Junior dos Santos in 71 seconds.

One of the reasons why heavyweights like Ngannou, who has never been a champion, gets paid so much is because of performance bonuses. People love knockouts, and great knockouts, usually delivered by heavyweights, may get that bonus.’

Here’s some more heavyweight knockouts for you to enjoy!

What is Conor McGregor’s Weight Class?

Conor McGregor has become a UFC world champion in two different weight classes, the featherweight and lightweight division. He also has fought in the welterweight division against Donald Cerrone, weighing 170 lb. He has jumped 25 lb since his 145lb debut fight in the UFC.

Check out Conor McGregor’s top finishes below for some of his UFC action:

The current UFC heavyweight champion is Francis Zavier Ngannou. Francis is a French-Cameroonian mixed martial artist born 5 September 1986. He is the reigning UFC Heavyweight Champion. Francis is known for being the hardest recorded punch in the world.

The UFC not having too many weight classes makes it good in not have too many champions. It also makes it easier to follow from a viewer’s perspective.

For more information about the UFC weight divisions, check out the video below ‘MMA for Dummies: Weight Classes & History’: