Home>Kickboxing and MMA news and equipment>8 Reasons Why Fighters Pull Out. No8 Will Astound You! 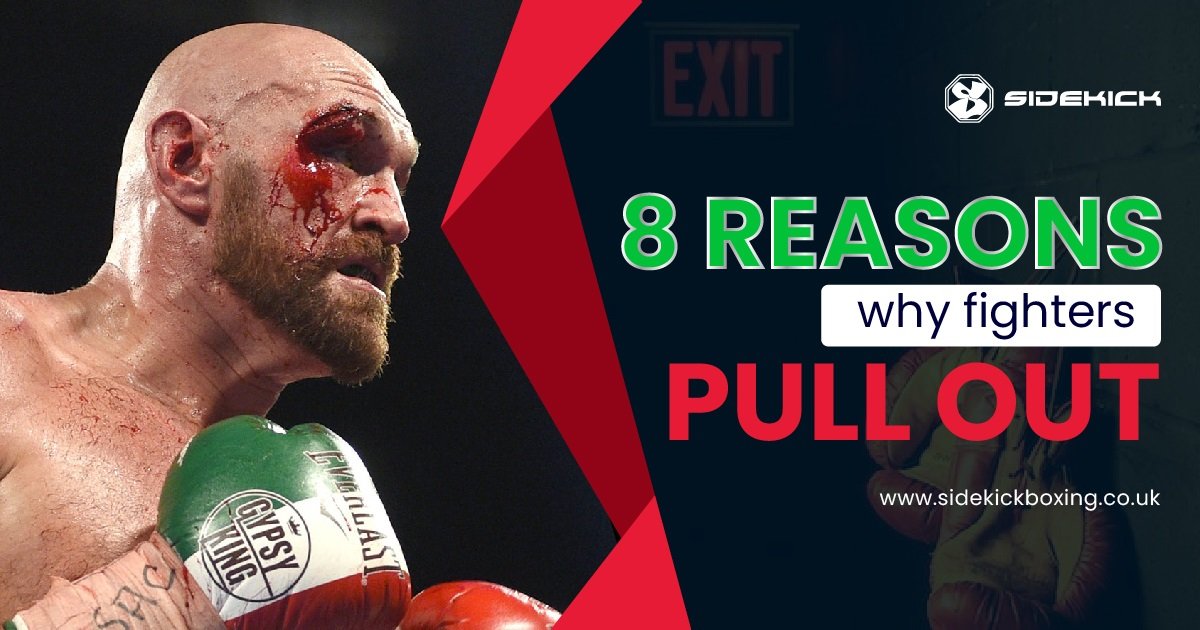 Why Do Fighters Pull Out?

8 Reasons Why Fighters Pull Out. No8 Will Astound You!

It’s a promoters worst nightmare, a high ticket selling fight is good to go, then at the very last minute a fighter pulls out for no expected reason, leaving the promoter in a big dilemma.

In combat sports, it’s quite common for fighters pulling out for legitimate reasons from time-to-time, as you can appreciate if a fighter suffers a dreaded injury leading up to a fight.

This has recently just happened to boxing promoter Eddie Hearn, when heavyweight boxer Dillian Whyte was forced to pull out of his main event bout last weekend due to a shoulder injury, losing Eddie Hearn hundreds of thousands of pounds. Eddie said he still wanted the show to go ahead regardless of the loss of money, as he doesn’t pull shows.

However, it’s not always a genuine reason as some promoters have claimed they have heard the worst excuses ever from fighters pulling out of a fight, and it is something that seems to happen a bit too often. To promote a successful fight show is very challenging even at the best of times as it needs to be very well planned out and organised that it runs smoothly on the night.

When a fighter pulls out it is more damaging to the show than simply just getting a replacement fighter. A promoter would need to find a new available opponent of an equal level. They will need to negotiate a new deal, make sure the other opponent is still happy to fight, refund previous ticket sales and maybe abolish the title if it was a championship bout. All a headache a promoter could do without.

So, why do fighters pull out?

It is very common for fighters not to make their target weight in their weight class. So if they know they won’t make it on the scales, they may choose to pull out to avoid any embarrassment. Whether it be down to not dedicating to a strict diet, or they were over optimistic on their fight weight, either way it is considered unprofessional.

Read our article ‘Why do fighters cut weight?’ here.

As mentioned earlier an injury is a genuine reason and it is unfortunate for any fighter. A fighter needs to be in their best condition in order to fight as combat sports can be a dangerous game. A cut or torn muscle are very common in fight camp. However, a fighter should be taking it easy the week leading up to the fight and heavy sparring or over-doing is a bit silly.

We all want to give off a tough image, but talking about a fight to actually stepping in the ring is completely different. A fighter may of put their name down to a fight which is months away, but as it gets closer, they may decide to pull out if they start to doubt themselves, especially if it is against a real knockout artist.

Even though exercise is said to boost your immune system, fighters still get sick, no matter how fit they are. Most fighters probably don’t want to pull out, but if they are too ill, it probably is the best option. Calling the promoter will be like ringing in sick to your boss, they usually won’t believe you.

Whether the promoter has done it intentionally or not, many fight shows sometimes fall around the same date as eachother, making it a little conflicting. It has been known for a promoter to pinch fighters soon to fight on another show offering more money. A fighter may earn more money fighting on a better show, but loyalty is key and should remain with their initial contract, but to some fighters it is a good enough reason to pull out.

Sometimes certain things pop up in life which are unavoidable that require us to stop everything and handle something more important to us than our sport or career l. This is unfortunate for the promoter, but certain things can’t be avoided.

It is disappointing that many fighters choose to use performance enhancing drugs to succeed, know matter how much the official’s try and clamp down on it. A fighter may have a fight lined up on a promotion and the anti-doping organisations may want to do random testing, so a fighter knowing they are taking performance enhancing drugs make an excuse not to fight. PED’s are banned substances and if a fighter was to fail a drugs test, they will likely to be banned themselves. Read our article ‘Steroids: why do fighters risk a ban?’ here.

8. Any excuse under the sun

Some fighters just clearly didn’t want to fight in the first place. Once a fighter has committed to fight and have announced it on Social media, they change their mind and wonder how they can get out of it without getting crucified. Some promoters have said they have heard the most ludicrous of excuses with one claiming a fighter didn’t even give an excuse and saw him legging it out the fire exit.

Here is some of the excuses promoters have heard:

Fighters pulling out of shows is not going to stop anytime soon. If it is a genuine reason it is perfectly acceptable for a fighter to cancel as combat sports are a dangerous sport and a fighter needs to be 100%. However, if the excuse is not genuine, it really affects the promoter which has a knock on to the sport, so their should be some contract to prevent fighters from doing it.