Home>Kickboxing and MMA news and equipment>Boxing, Kickboxing or MMA: What is the most popular combat sport in 2022? 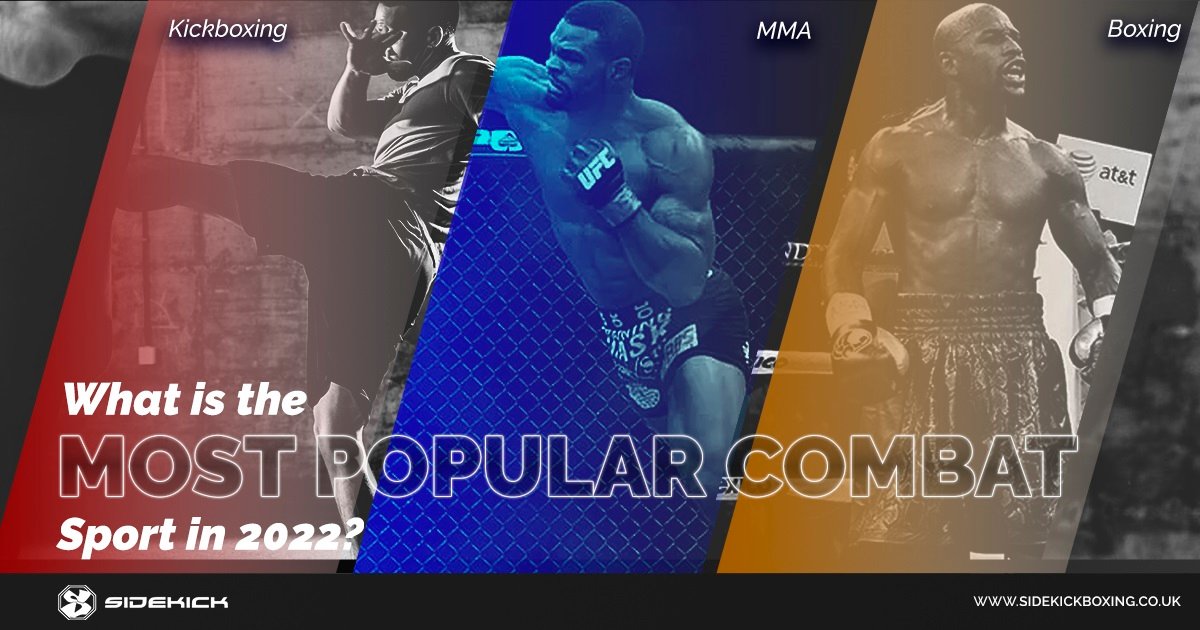 Most Popular Combat Sport in 2022

Boxing, Kickboxing or MMA: What is the most popular combat sport in 2022?

We all love to follow trends, whether it be new clothing, tech gadgets or even the sports we watch and play. Combat sports are forever growing in popularity, and it is not uncommon for someone to have trained in at least one discipline.

With the various styles, everyone has their take on each. Some prefer kickboxing as the flashy kicks can make it exhilarating; some choose MMA as it is the closest thing to a real no-rules fight, and boxing, simply because it is a sport that dates back centuries, is considered a gentleman’s sport.

Each style of combat sport can spike in popularity in different eras. New exciting promotions and fighters with prominent personalities all impact the fans.

For instance, Anthony Joshua helped bring life back into heavyweight boxing, and Conor McGregor did for MMA, starring in the UFC. McGregor fought twice in 2021, the most active he has been since 2016.

What is the Best Combat Sport?

That generally all comes down to a personal opinion, and they are all just as great in their way. Each combat sports promotion all work in a very similar way; however, they couldn’t be further apart when it comes down to them getting their numbers.

The UFC, which is the biggest MMA promotion globally, runs events regularly and consistently, and the MMA fans like to know what is going on in the UFC and watch every event regardless of who is fighting.

Whereas boxing doesn’t have one leading independent promotion, promoters are looking for fighters to matchmake for each event. So boxing still gets events run up and down the country, yet fans only seem to tune in when it’s a massive PPV between 2 big names.

Kickboxing seems to be a little different from boxing. It still has enormous global promotions like Glory kickboxing or One Championship, but it is not as commercialised as boxing and MMA.

Kickboxing seems to be more of a niche market for those who prefer kickboxing over other styles.

‘The popularity of boxing has also led to the popularity of betting on boxing matches. Boxing is the most popular sport to bet online with Novibet. The boxing industry sees hundreds of millions of dollars annually from betting alone…

Today, karate is practised by millions, watched and followed by millions, and is a hugely popular sport in the global pop culture, thanks to films like The Karate Kid, which show not just the physical, but the philosophical roots of karate….

MMA fighters incorporate different styles from different martial arts into their style, with the most popular types being boxing, judo, wrestling, kickboxing, and Brazilian jiu-jitsu. The most popular MMA organisation is the Ultimate Fighting Championship, which is based in Las Vegas, Nev. The organisation has in recent years grown to be a billion-dollar enterprise.’

What is the Most Popular Combat Sport in 2022?

That demographic can come down to many factors, but if you are looking to train in the trending combat sport or know the best opportunities for a fighter, we will give you a rundown of each.

It doesn’t get any more black and white than seeing the PPV subscriptions to an event, as this is the number of subscribers who have paid for a single particular event. Furthermore, several people would more than likely be watching it in the same household with each PPV subscription.

Floyd Mayweather has the highest selling PPV with his previous boxing matches reaching a record breaking 4.5 million PPV sales. However, as he now retired boxing will more than likely not see these soaring numbers anytime soon. So, here are a few of the most significant pay per view over recent years.

In Glory’s kickboxing promotion, even with their superstar Rico Verhoeven, they only sell 100 thousand pay per view buys. (Kickboxing championship)

So, as you can see an MMA fight between two huge names like McGregror vs Khabib is capable of selling just as many PPV buys to boxing.

With 8.5 billion Google searches per day, Google certainly has some trending data.

Below, you can see a graph we saved from Google trends that can easily indicate different combat sports’ popularity.

Although it is not 100% the right metric to use, Google Trends is an excellent way to show how popular the different combat sports are regarding corresponding Google searches. As you can see, Boxing is much greater in search volume compared to kickboxing and MMA.

We are now in a world where social media is everything. If it’s not online, it’s generally not that interesting. What does seem to be exceptionally popular on social media is people watching fights. People seem to love fighting, which you can read our article about here. And that is all styles of fights too.

However, the mixed martial arts and kickboxing promotion One Championship was announced by Meta, the most popular for video engagement on Facebook over every sport.

As suggested above, social media has become an invaluable tool for athletes to connect with fans worldwide. It has also helped with the sales of merchandise ticket sales and increased (or perhaps decreased) the popularity of some boxers.

Check out the list below for the most famous boxers active on social media today:

In MMA, some of the UFC stars are just as popular on social media with Conor McGregror having a whopping 44.7 million Instagram followers. Heavyweight Francis Ngannou has 3.8 million and even the promoter Dana White has an impressive 7.1 million himself.

Although Floyd Mayweather is the most popular on social media, as suggested above, Jake Paul is a rival in social media terms.

Jake Paul has 15 million followers and has clocked up an impressive 3.5 billion video views on YouTube, while the latter has 20.3 million Instagram fans and 6.1 million more on Twitter.

However, having a large social media following doesn’t make you automatically popular amongst boxing fans. Jake Paul has been criticised repeatedly with NY Fights suggesting:

‘One of the biggest criticisms levelled at the Paul vs Askren fight was the level of seriousness (or lack thereof) which the MMA veteran brought to the bout. Askren was visibly out of shape at the commencement of the fight, and he failed to land a single blow on his opponent, succumbing to a Paul right hook within three minutes of the opening round. The referee’s decision to bring the fight to a close was also deemed to be dubious.

Nonetheless, Askren did not look too displeased with the outcome, posing for photos with a smile on his face after the event. Why? Because of the $500,000 he had just pocketed for 2 minutes and 18 seconds of labour.’

2022 is certainly looking promising for an exciting year in combat sports. McGregor is potentially returning to the UFC and looking bulkier than ever; it would be interesting to see how he gets on. Also, with two big heavyweight boxing clashes between Tyson Fury vs Dillian Whyte and the rematch of Anthony Joshua vs Usyk; it should be a cracking year.

However, the hype of boxing could slowly fade away as Tyson Fury has already mentioned retirement, and Dillian Whyte is not selling his fight to the best of his ability.

Whyte didn’t even show up to his press conference; it may not sell as many PPVs as expected. Not only that, but with the current situation of Usyk in Ukraine, there is no certainty when his fight will be. Boxing also seems to be receiving lots of criticism due to the Youtuber style of fights that many fans are not interested in.

Every combat sport is brilliant in its way, and true fight fans tend to follow all of them. Boxing, as a rule, generally is always the most popular; however, we think things could be different in 2022 and could be the year for MMA. It would also be amazing to see kickboxing as commercialised as other sports one day.