Home>Kickboxing and MMA news and equipment>Dirty Boxing: The Tricks Of The Trade 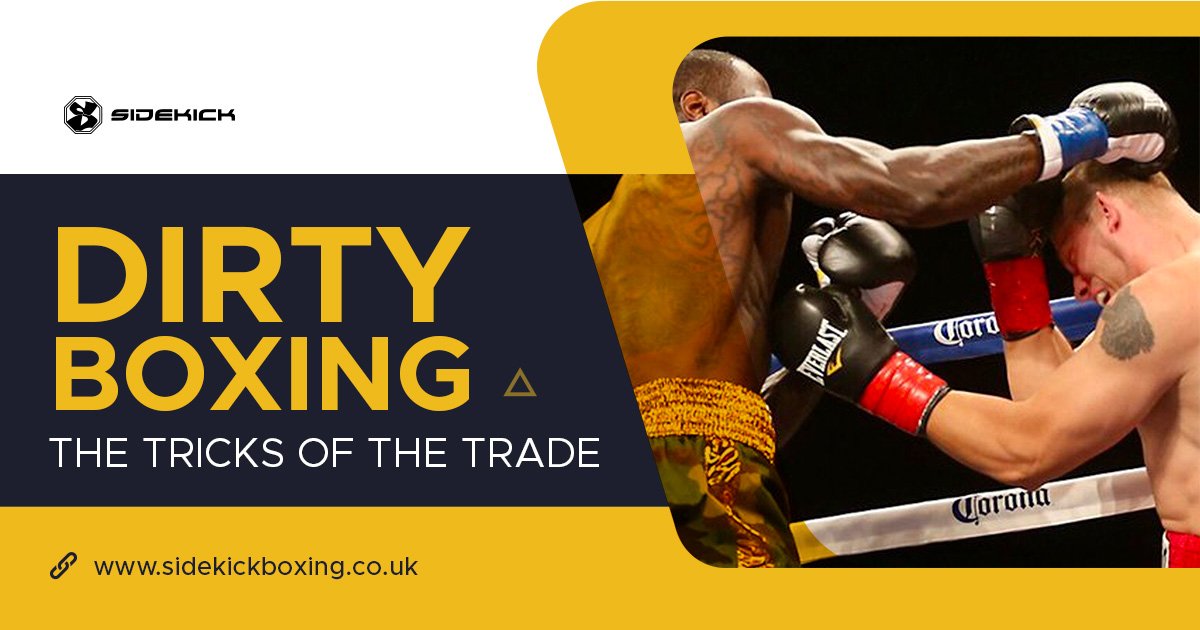 When it comes down to fighting in combat sports like boxing, many believe a fighter has to do whatever it takes in order to win.

Whereas, the sports purists believe ‘dirty boxing’ should be forbidden as it could easily be considered cheating, especially as combat sports have a strict set of rules.

So, what is Dirty Boxing?

In boxing, dirty boxing refers to any technique that is not allowed under the rules of the sport. These techniques are usually done to gain an advantage over your opponent.

For example, if you’re trying to knock out your opponent, you might throw a punch to the back of his head when he has his back turned for a split second. You could also try to hit him below the belt, which refers to below the waist or waistband of the shorts.

Dirty boxing tactics are sometimes used to avoid punishment. If you’re getting punched in the face, you might keep holding on or clinching your opponent to buy more time.

Suprising enough, many boxing champions including Floyd Mayweather and Evander Holyfield used dirty boxing tactics as part of their skillset. Even boxing legend Muhammad Ali was not the cleanest of boxers, he too had many dirty boxing tricks up his sleeve.

Below we have put together a list of the traditional dirty boxing tactics:

We couldn’t do a post about dirty boxing techniques without having the famous rabbit punch in it. A rabbit punch is a punch to the backside of your opponent’s head, the back of the neck or the base of the skull. These types of punches are usually not intended as they can happen when you’re moving fast or losing your balance. However, some fighters may throw the odd rabbit punch when they are in the referee’s blind spot.

The rabbit punch can be extremely dangerous and boxer Prichard Colon suffered a life-changing tragedy in the boxing ring after receiving a punch to the back of his head.

It is almost tradition for fighters to touch gloves at the beginning of the opening round. Its a sign of respect and sportsmanship. Yet, some fighters take this opportunity to pretend they are going to touch their opponents glove, but instead throw a unexpected strike.

They haven’t necessarily done anything wrong in the referees eyes but it doesn’t go down well with the fans. One MMA fight between Jeremy Bailey vs Phil Gildea got so heated Jeremy lashed out while the referee was telling them the rules for a fair fight.

If you have ever watched the Muhammad Ali vs George Foreman fight in 1974, Ali kept pulling on the back of Foreman’s head. This dirty boxing strategy is to pull the head forward and cause fatigue to the neck muscles. This would mean that the head would move around more so when a punch is landed to head it is more likely to cause a knockout sooner.

Low blows can happen easier in other combat sports with kicking allowed as legs and knees get raised making it more likely to clash in the groin. But in boxing it is very unprofessional as a boxer should never punch so low.

Sometimes fighters throw a cheeky last strike right after the bell goes. If its just as the bell goes it could be seen as unintentional. However, some fighters have no intention on stopping and should be warned or have a point deducted.

Watch the video below to see boxers who clearly didn’t want the round to end:

Sadly in all sports, doping and drug abuse goes on. It is illegal and it is a way fighters try to get any advantage over their opponent.

But as it is widely known that fighters use performance enhancing drugs, it may leave other fighters feeling they also need to do it so their on an equal playing field.

Read our article ‘Steroids: why do fighters risk a ban?’ here.

When a fighter gets knocked down many instantly claim they slipped, this is because being knocked down will give them 8 points out of 10 for that round.

When some body shots land their can be a late delay for the fighter to be winded. So when a fighter drops his knee to the canvas because he is winded, he may try to convince the referee something is up with his boots or laces to avoid the points being deducted.

Since the rules of Marquess of Queensberry were drafted in 1865, holding on to a fighter has always been forbidden. It is illegal to physically hold your opponent, especially to hit them at the same time.

However, this has become a grey area in boxing as what is considered as hugging or clinching are not illegal, we’ll in terms of getting disqualified for doing it anyway. So it’s a fine line and hard for a referee to determine if a fighter is actually using his arms to prevent his opponent from moving (holding) or if he is just hugging him.

A kidney punch becomes illegal when intentionally thrown at the lower back area. To do this takes a looping hook, as it goes past the side and lands in the rear. A referee will advise fighters to take caution the first time it happens.

Standing on the foot

Standing on an opponent’s foot will definitely throw them off guard. As soon as someone traps your foot, you naturally only concentration releasing it.

This is the perfect time to follow up with a strike. However, the standing on the foot trick works mostly when a southpaw is against an orthodox fighter as both lead feet are on the same side.

An eye poke is a very dirty boxing move as it is dangerous which can leave life changing injuries. It seems to happen more often in MMA than boxing because the fingers and the thumb are not closed.

However, as delicate as the eyes are, it doesn’t take much to effect an opponents vision. It is suggested by Muhammad Ali’s former opponent Ernie Terrell, that he was a culprit to an eye poke after going 15 rounds with Ali himself.

Terrell said after their fight that neither Ali’s punches nor his insults had as big an impact on the fight as what happened during an early clinch.

“I had a great chance to win that fight,” Terrell recalled in the book “Muhammad Ali: Through the Eyes of the World.”
“I was bigger than Ali at that point. But during the second round of the fight, we got caught in a headlock, and he took his thumb, and he poked it in my eye. After that,” his account continued, “it looked like I was fighting two Ali’s.”

In boxing, striking with any part of your body other than the gloves is illegal. However, with close encounters in the boxing match many fighters feel the force of their opponents forearm. The forearm smash was an effective technique even Floyd Mayweather used.

He liked to sneak it in when he thought his opponent was getting too close. Using the forearm is an illegal move in boxing, but you get away with it as soon as you don’t use it to blatantly attack your opponent. It’s great for setting up a punch, but it doesn’t last long enough to be useful for anything else.

A head butt is a deliberate dirty boxing trick in which a fighter may do it cleverly to claim it was accidental. A great example of a head butt in a boxing match was in the infamous rematch between Evander Holyfield and Mike Tyson in 1997.

Some fighters go to great lengths in order to win, or they simply just lose control. Ear biting has to be the least common of boxing tricks, and as crazy as it sounds fighters have done it.

Mike Tyson bit off Evander Holyfield’s ear during in their boxing fight in 1997. Holyfield continually swung his head into Tyson’s as a way of stopping his punches. This irritated Tyson so much that he eventually bit Holyfield’s right ear in the third round.

Dirty boxing has been going on since day dot and is not going to stop anytime soon. Many enthusiasts claim its part of the game, whereas others see it is forbidden. The only issue is with dirty boxing, a boxer can have it down to a fine art were it gets failed to notice.