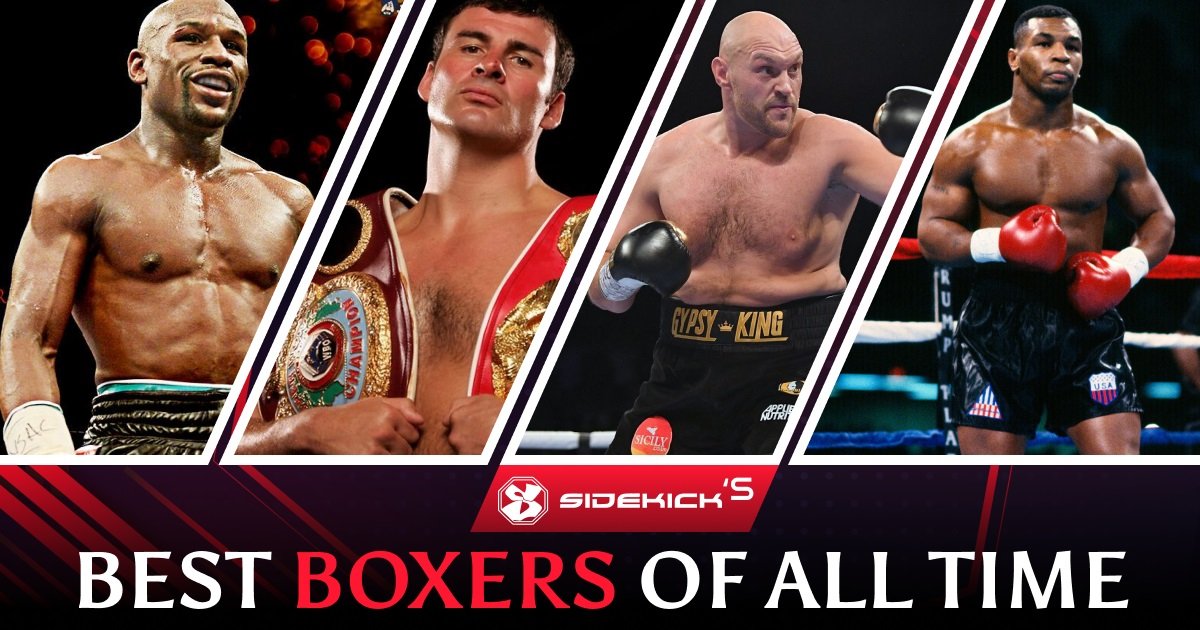 Best boxers of all time

Sidekick’s Best Boxers of All Time

When many boxing fans talk about the best boxer of all time, Muhammad Ali usually springs to mind, but was Ali the best out of every generation of boxers?

With Ali losing some of his fights, he certainly couldn’t necessarily go down as the best, so who is. It is fair to say it could be debated until the cows come home, and it generally comes down to a personal opinion as to who is considered the best boxer of all time.

However, many boxers have an unrivalled record, so we will go through who we think are some of the best boxers of all time that may get overlooked.

But firstly, what makes the best boxer?

The most important thing for a fighter is to win the majority of their fights and beat credible opponents.

A fighter needs to have many fights on their record with a very high percentage win/lose ratio. Most great boxers that have gone down in history generally have had 40+ fights.

There is more to just throwing a punch and hoping it connects. Accuracy, precision, timing and power, and all with an arsenal of combinations, is required as a top-level boxer.

Mastering the boxing footwork is an essential aspect to learn. When perfected with great head movement, a boxer can hit and dodge strikes evasively.

Some of the best boxers around seem to be very intelligent. This is no coincidence either, as a fighter capable of outsmarting their opponent will have an advantage.

Having the iron mindset to go through with a gruelling training camp takes dedication. Also, a fighter to go 12 rounds in a professional fight, especially if they have taken a beating, requires real mental strength.

A fighter needs to be trained like a spartan. It is no good for a fighter to be gassing out in 2 rounds.

You might think even if a fighter has all these attributes, they will surely be one of the best boxers around. However, there is more to being a fighter than just skill.

A fighter needs to be charismatic, popular to make fights exciting to want to watch, and lastly, put bums on seats.

Now we have an idea of what makes the best boxers; let’s dive into our best boxers, and please, if there is any you disagree with, don’t hold it against us.

People usually talk about Mayweather, yet Joe Calzaghe has an almost just as impressive record when it comes to undefeated records. With a perfect record of 46 wins, the Welshman is the longest-reigning super-middleweight world champion in boxing history.

His father trained Calzaghe, and the duo had an extraordinary bond that would give Joe everything he needed to pull off a master-class performance. He was super confident that he could pull off some great show-boating during about, especially doing a shimmer right in front of his opponents.

As with a top boxer, they’re still prone to criticism, and many would say Calzaghe slaps rather than punches, yet we are sure his 46 opponents have a different take on that.

Calzaghe’s first professional fight was against Paul Hanlon. It was over within one round. Hanlon, after being downed early, was down again at 2:31 from an accumulation capped with a right hand. He made it to the count of 8, but the referee called an end to the bout.’

Not just because he had an out of this world defence with a 50 and 0 record, but because boxing is still a paid job and Mayweather is the highest-paid boxer ever.

After all, he is not called money Mayweather for nothing.

‘The boxer missed last year’s list, but his August 2017 fight versus Conor McGregor in Las Vegas generated more than $550 million in revenue, with Money Mayweather earning $275 million as the “A” side of the bout and for his role as promoter.’

Mike Tyson became the youngest ever heavyweight world champion and still gets recognised as one of the best heavyweight boxers of all time. However, he gets mixed opinions; as great as he was, some wouldn’t put him in their top ten. His power was immense, and his movement was like no other; he had everything a fighter needed to be fearsome.

But, with Mike Tyson’s personal life sending him off the rails, it was getting in the way of his boxing career that we never got to see his true potential.

When we talk about confident fighters, Naz is the perfect example. His personality, skill and knockout power made him truly exciting. Even how he entered the ring by flipping over the ropes was exciting.

Also, every fan loves a knockout artist, and for a featherweight, his power and knockout record are unmatched, even by the heavier divisions.

Chris Eubank had a fantastic boxing IQ; one hit power and incredible toughness are what made him a world-class fighter. However, he is most remembered for too many, his arrogance, self-belief, and showmanship.

As we were in the Brighton area, we had seen Eubank drive around narrow roads in a gigantic truck and even shoot into the thistle hotel on an electric scooter. It was even a rumour he was planning to buy the West pier to live on.

The era of Chris Eubank and Nigel Benn has been one of the most historical times in boxing. Both fighters had tragically caused life suffering injuries to their previous opponents, and for these two to meet was always going to be a battle to remember.

With his son Eubank jr on the scene, his legacy lives on. The Mirror suggests:

‘The son of former middleweight champion Chris Eubank, the 26-year-old, known as Next Gen is forging his own path in the fight game. Beaten in just one of his opening 21 fights, with 15 of his 20 wins coming by knockout, his speed, power and athleticism have long marked him out as one of the UK’s best prospects.’

It is undoubtedly that Tyson Fury will go down as one of the world’s best of all time. Also, it was only recently a boxing presenter said he may even become ‘the greatest.

Let’s face it; it will take some opponent to beat a 6″ 9 giant that moves like Prince Nassem. However, he hasn’t always received such exceptional feedback; before he beat Wilder, many didn’t praise him like today.

Even when he beat Klitschko, casual fans would judge on their dislike of him rather than his incredible performance. Many claimed Anthony Joshua is the best boxer for years, but opinions have changed after seeing Fury make a comeback to beat Wilder.

Check out the best of Tyson Fury below:

Sorry, that was a joke, but credit where it is due, the YouTuber certainly knows how to sell himself and has been established in the boxing industry, making more money than most pros. It shows that even as not the most skilled of fighters, knowing how to market yourself, you can still cut it in a tough market.

On the other hand, Paul takes it seriously and has helped bring an audience to boxing. Furthermore, as much criticism he has received, he has co-promoted an event with Eddie Hearn for the Katie Taylor vs Amanda Serrano fight.

And he is doing his best to make sure the UFC fighters get paid more. So, as much he is currently miles away from being the best boxer ever, we feel he is good for the sport.

‘Mr. Paul, who was an athlete in high school, began a boxing career in 2020. “It brought back the competitive, athletic Jake Paul,” he told Rolling Stone recently […]

Fighting has helped Mr. Paul expand his audience. It has also made him richer: In an interview with ESPN last year, Mr. Paul said he earned “eight figures” for a fight against Nate Robinson, a former N.B.A. star.

For his most recent fight, against Ben Askren, a former mixed martial arts champion, Mr. Paul’s disclosed pay was $690,000. (After the fight, Mr. Paul wrote in an Instagram post that the fight had drawn 1.5 million pay-per-view customers.)

Canelo is a Mexican professional boxer who has won multiple world championships in four weight classes from light-middleweight to light heavyweight. Canelo is a natural fighter yet extremely dedicated to his boxing craft.

Even when he got schooled by Mayweather, he still learned and came back a better fighter. Canelo’s movement and timing are so precise that he is a challenging target to hit.

He has rarely been inactive throughout his career, which has made him the magnificent boxer he is today. Canelo Alvarez’s biggest fights have grossed over 500 million pounds in revenue, so he is a box office draw.

Who do you think is the best boxer ever? Is it because of their skill, earnings, or an all-around aspect of the sport?

To learn about the different boxing championship title belts read our article here.