Home>Kickboxing and MMA news and equipment>Kickboxing, K1 and Muay Thai Shorts: What is the Difference? 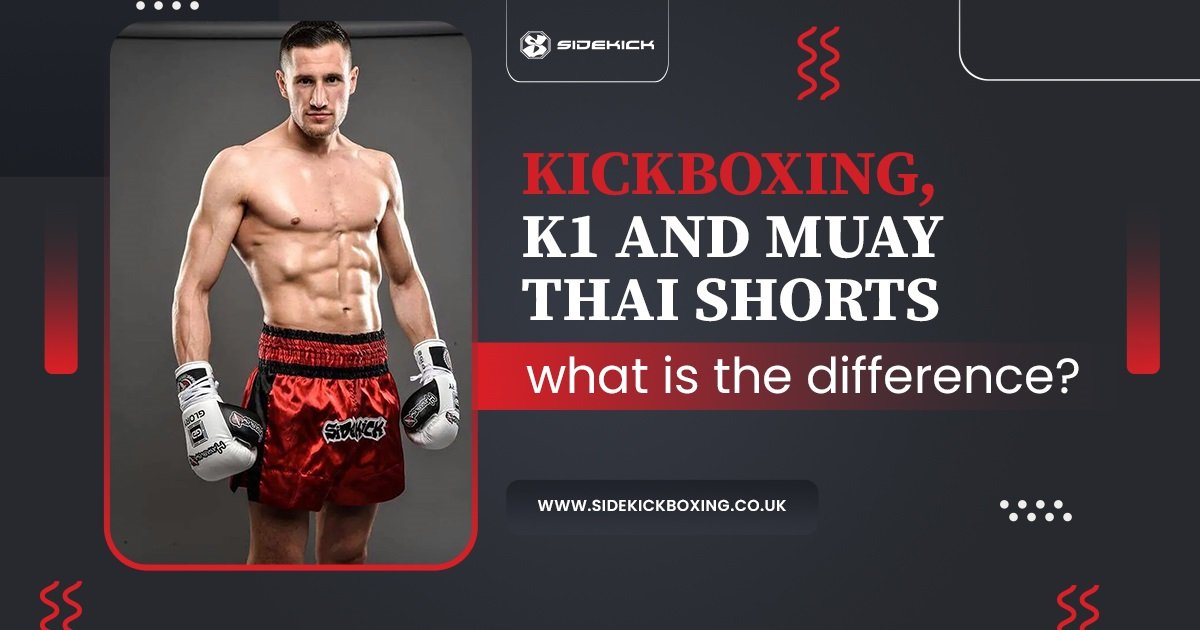 There’s nothing worse than turning up at an event to find out you are not in suitable apparel. And martial arts is generally no exception as you certainly wouldn’t wear a Karate Gi in a kickboxing class. You would stand out like a spare part.

As kickboxing has various sports styles, each has its design of shorts worn. Kickboxing has K1 and even Muay Thai; as much as the practitioners don’t like to call it kickboxing, it still falls under its umbrella.

Kickboxing is a sport described basically as it is said, kick-boxing. So any sport where there is kicking with boxing could easily be considered kickboxing—the dictionary states’ Kickboxing’ 1. The gloved combatants may also kick with bare feet, a form of boxing.

It is understandable why Muay Thai fans don’t perceive it to be kickboxing, as in Muay Thai, elbows and knees are also allowed. Kickboxing is mainly associated with the American form of kickboxing known as Full contact Kickboxing, which is no kicks below the waist.

Although combat sports appear to be identical at first glance, being more assertive, quicker, more agile, and more innovative than your opponent is always the goal—each discipline has its own set of rules and standards. This means that sportswear designers will have to adapt to the unique constraints of each profession.

Nowadays, kickboxing shorts seem to have replaced the traditional satin trousers as they have become a more popular choice. Kickboxing shorts are made in satin material and have a wider leg than your typical boxing shorts, allowing extra freedom of movement when performing kicks.

Muay Thai shorts are also made in satin material and are designed for the sport of Muay Thai (translates to Thai Boxing), which originated in Thailand. These shorts are slightly shorter than boxing shorts to accommodate the country’s hot climate, yet not restrictive and with enough movement to deliver effective knees and high kicks.

A Muay Thai fighter mustn’t feel any restrictions on their legs as they also need the freedom to block kicks. Muay Thai shorts are easily recognisable compared to other fight shorts as they usually come in very bright, vibrant colours with striking designs. Another giveaway is they also have Thai writing embroidered across the font. Even though Thai shorts are pretty short, many fighters still like to roll their shorts.

Muay Thai is a highly dynamic sport that allows for various attacks with elbows, knees, legs, and fists, as well as the famed Thai clinch and the leg sweep or leg grab, which catches and drops your opponent’s limb on the canvas.

Loose clothing, which is beneficial in sports like taekwondo, is a disadvantage in Muay Thai since it allows your opponent to grasp you and knock you off balance quickly.

Furthermore, any heavier clothes will slow the fighter down and limit their body heat, which isn’t always good in a sport like Muay Thai.

As mentioned in a previous article, ‘What is K1 kickboxing?‘ K1 fighters wear satin shorts similar to Muay Thai shorts, but the shorts have more of a kickboxing theme or design.

The latest style of K1 shorts has a new modern cut. The side of the shorts is made from a mesh fabric which also has a wide split at the bottom. This unique shorts style allows the extra room for high kicks and is more breathable.

The united K1 kickboxing style is now almost close to Muay Thai as conventional kickboxing. As a result, many kickboxers prefer to wear shorts.

There are also other styles of shorts available to suit different combat sports.

Mixed Martial Arts (MMA) includes a wide range of combat movements; as a result, classic boxing shorts won’t cut it for grappling and other MMA movements. MMA shorts (also known as grappling shorts) are often a more extended version of the shorts worn by MMA fighters.

MMA shorts are flexible and durable and have a long, narrow fit around the legs. Thanks to modern technology, MMA shorts are becoming increasingly light. A perfect waist fit is critical in MMA, where grappling is expected.

If you’ve ever watched a UFC fight, you’ll notice that some combatants don’t wear MMA shorts and instead wear a pair of skin-tight shorts.

Vale Tudo shorts (also known as compression shorts) are a grappling-specific gear style similar to compression shorts. These are designed to keep extraneous material to a bare minimum and avoid unnecessary friction while grappling, but they can also be worn as form-fitting training shorts.

There’s a good possibility you’ve seen a pair of kickboxing trousers on fighters with a more conventional kickboxing background. The loose fit allows you a lot of flexibility when wearing foot protection underneath. These aren’t recommended for other sports due to their length and fit.

Like the compression shorts we discussed before, compression trousers have become a more standard training option, although they aren’t meant for combat sports. While they can be worn on their own, they function best as a base layer under other shorts.

Spats are the grappling counterpart of compression pants, but they’re designed to be far more robust and fight-ready. They aren’t built for stand-up fighting, but they are a terrific option for anyone practising in mixed martial arts who wants to shake things up.

How to Choose the Best Pair of Combat Sports Shorts?

It should go without saying that proper sizing is critical. Different companies’ sizes might vary, and not all styles aim for the exact fit, as with any clothes.

Unfortunately, finding shorts in actual stores is not always straightforward due to limited or non-existent selections. Check how the firm you’re buying from sizes their shorts – most have size guides available online.

The shorts may be the proper style and size, but if the pair you choose is made of low-quality materials or is poorly constructed, they will not last long.

Even if they last long, they may be uncomfortable, rubbing in the wrong places or not providing you with the flexibility you require. We always emphasise the value of reading evaluations, whether from a dedicated review site like ours, customer reviews on the internet, or simply from friends who exercise with you. It’s pointless to spend money on a product that isn’t right for you.

So, while you might not give it much thought, there are many characteristics to look out for these days. Typical features are reinforced seams or flatlock stitching, silicon lined waistbands, or breathable panels.

None of these elements is required, and some are dependent on the sort of shorts you choose, but depending on what you plan to use the shorts for, investing in a pair with specific attributes can significantly improve your training.

Colours, patterns, and fit may contribute to a fantastic pair of shorts, so make sure you’ll be satisfied with your purchase. Finding something that speaks to you personally rather than picking something based on specifications is the key.

After all, there’s no use in buying anything if you’re going to put it in a drawer later because you don’t like it.

But most of us aren’t made of money, and we can’t afford to spend a ludicrous amount of money on a single pair of shorts. If you start shopping for the cheapest shoes available, the qualities we listed earlier (quality, features, etc.) will suffer.

It’s a good idea to compare the pair you’re considering to similar products from other companies, as this will give you a better idea of whether you’re getting a reasonable price.

Fighters are very particular about their preference for wearing their favourite fight shorts.

However, as much as each short is designed for a specific discipline, as long as they feel comfortable with you, there is no harm in wearing Muay Thai shorts in a kickboxing class.