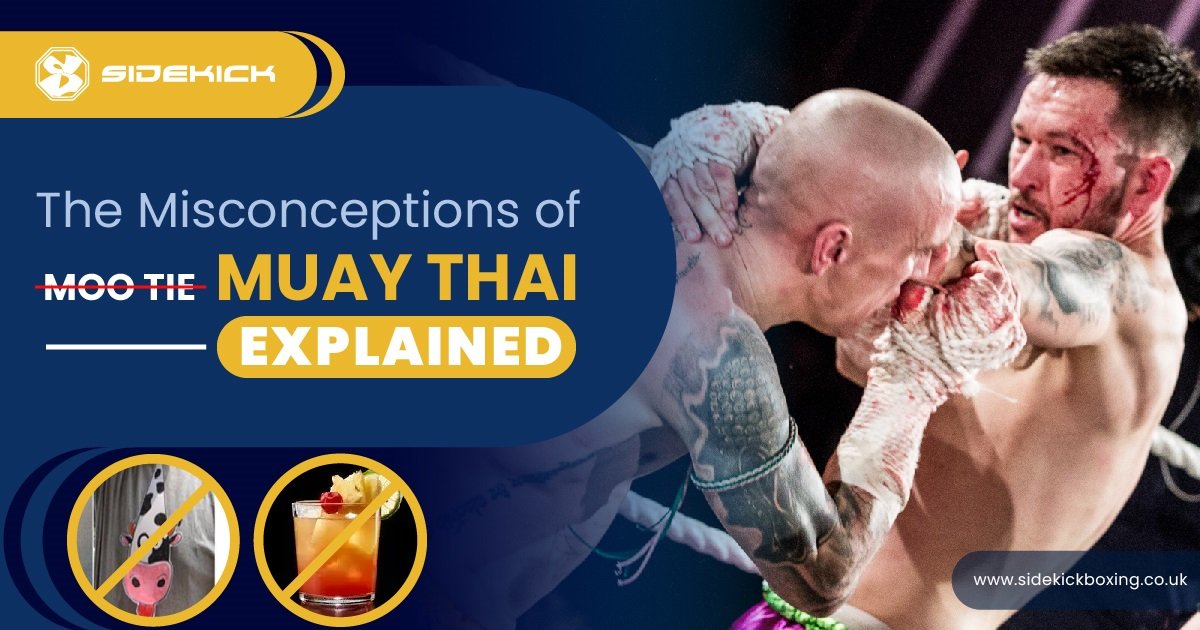 The Misconceptions of Muay Thai Explained

There are many different martial arts in the world, and no two are the same. They each have their unique style, country of origin and history of how they formed. Every martial art is effective in different ways, as some benefit from grappling and submissions, whereas others benefit from striking.

Unless we have trained in a particular discipline, we perceive each martial art of how effective it is or how tough it is to learn, yet we could be a million miles away from the truth. One martial art which gets a lot of misconceptions is Muay Thai.

So, What is Muay Thai?

The Collins Dictionary defines Muay Thai as:
‘a martial art developed in Thailand in which blows may be struck with the fists, elbows, knees, and shins’
Source: https://www.collinsdictionary.com/dictionary/english/muay-thai

Muay Thai is a spiritual ancient martial art that originated in Thailand. It was formed for the Thai military to be used in battle as it offers very powerful striking from eight limbs of hands, elbows, knees and shins. Hence it’s given the name ‘the art of the eight limbs.

It has become the country’s national sport, and it has widespread popularity across the globe. However, travelling over from the east, it gets different views of the sport compared to its origin.

Why is it Called Muay Thai?

Muay Thai sometimes gets called or pronounced in quite a few various ways. As in Thailand, they have completely different languages and alphabets; in fact, they have 46 letters, we may find it tricky saying their words.

Some call it Moo Tie or Mai Tai, but in fact, a Mai Tai is excellent if you’re in a funky cocktail bar. If you are after a Mai Tai recipe, even though we don’t recommend it while training Muay Thai, we will give you our favourite recipe at the end of the article.

Muay Thai is the English alphabet of the Thai vocabulary of มวยไทย, which translates to Thai boxing. Muay means boxing.

Yokkao suggests: ‘Muay Thai is known as the “Art of 8 limbs” because it makes use of 8 points of contact namely, punches, elbows, knees and kicks. This differs it from other stand-up combat sports such as boxing (2 points – fists) and karate (4 points – fists and feet).
Today, Muay Thai is practised and competed not only in Thailand, but also all around the world.’
Source: https://uk.yokkao.com/pages/what-is-muay-thai

Check out the video below for a history of Muay Thai:

Yes and no.
Many hardcore Muay Thai practitioners get a bit offended when people call it kickboxing. However, Muay Thai falls under the kickboxing umbrella and other styles as you can still punch and kick.

Muay Thai is its own individual sport, and it is very different to all the other styles. Sometimes you hear people referring to Muay Thai as K1 with elbows, but they are very different. K1 is derived from both traditional full-contact kickboxing and Muay Thai to form a hybrid sport to create a more exciting sport.

“Muay Thai is a completely different style to traditional full contact kickboxing. You would of though having already tons of experience in kickboxing, adapting to Muay Thai shouldn’t be too challenging. However, a basic defense in Muay Thai is checking the leg kick and i always remembered after it was to late”.

In our previous article ‘What is the Difference between Muay Thai and Kickboxing Rules?’ we suggested that:
‘The main difference between the two sports is that there are less striking restrictions in Muay Thai as elbowing and knees are also allowed… The apparel or fight wear is also different as Muay Thai fighters wear satin shorts and Kickboxers traditionally wore satin trousers in full contact kickboxing.

In recent years with the popularity of K-1, kickboxers now tend to wear a similar style of satin shorts like in Muay Thai.’
To learn about the different rules in kickboxing and Muay Thai, read our article below:
https://sidekickboxing.co.uk/what-is-the-difference-between-kickboxing-and-muay-thai-rules/

Does Muay Thai have Belts?

Muay Thai doesn’t have a grading syllabus like you would find in other traditional martial arts. Instead, they have what Mongkhon and Pra Jihads are. These are spiritual heads and armbands said to bring good luck. As Muay Thai spread in popularity outside of Thailand, the armbands were incorporated in some foreign gyms as a kind of belt system similar to that in Karate or Taekwondo.

is the Teep the same as a front kick?

It is the terminology it gets called in different martial arts. When Muay Thai practioners regularly talk about the effectiveness of the teep, they sometimes suggest it is a different kick to other martial arts styles.

This sometimes leaves other martial artists baffled as the Teep appears to look almost identical to a ‘front kick’ or ‘push kick’ in kickboxing. A slight difference between the Teep and a front kick is in Muay Thai the fighter lowers the same side arm to drive more power, whereas in kickboxing both hands will still be in a gaurd position.

Why do people in Muay Thai say Oooweee?

Have you ever seen people training in Muay Thai and thought, why on earth are they saying ‘Oowee’? Well, that is a famous saying among Thai practitioners, and we have a theory from which it may have originated. It may not be 100% gospel, but there is sound reasoning behind it.

Thailand and France have had lots of history dating back centuries.Thailand is historically France’s oldest partner in South-East Asia. In 2016, the two countries celebrated the 160th anniversary of their relations (the Treaty of Friendship and commerce between Siam and France was signed on 15 August 1856).

In 2019, France celebrated the 333rd anniversary of the first embassy of the Kingdom of Siam to France, led by Kosa Pan, in 1686. ‘Oh oui’ is a French word that means ‘oh yes, so this is the closest explanation.

Are Muay Thai Gloves and Boxing Gloves the Same?

Both Muay Thai gloves and boxing gloves are very similar as they are both designed to do the same job and form a clenched fist in a secured padded leather glove.

However, traditional Muay Thai gloves have a slightly different design style, as they are a little more of a square shape. Both gloves can be used in either sport, but the only thing to consider is that you can clinch in Muay Thai as long as they allow you to do so.
Check out our blog ‘What are the Best Muay Thai Gloves?’ for more information below:
https://sidekickboxing.co.uk/what-are-the-best-muay-thai-gloves/

For more information about how to get started with Muay Thai, check out the video below: